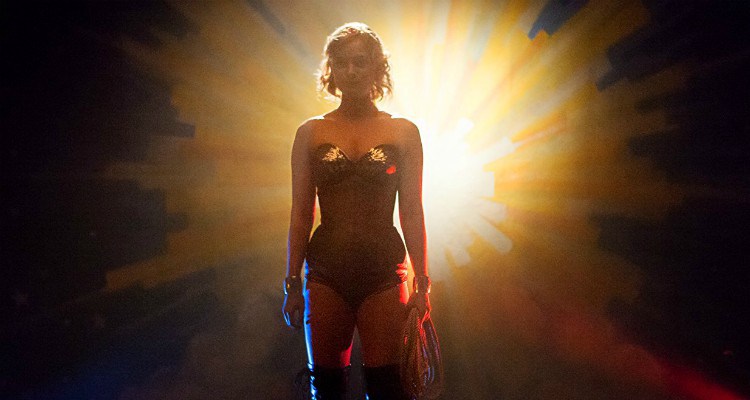 Professor Marston and the Wonder Women

PROFESSOR MARSTON AND THE WONDER WOMEN (USA/16/109mins)
Directed by Angela Robinson. Starring Luke Evans, Rebecca Hall, Bella Heathcote, Connie Britton, Oliver Platt
THE PLOT: Based on the true story of the life of Wonder Woman creator William Moulton Marston (Luke Evans), the film follows the unconventional relationship between Marston, his wife Elizabeth (Rebecca Hall) and their teaching assistant Olive Byrne (Bella Heathcote), and how these women ultimately influences Marston’s most lasting creation.
THE VERDICT: Written and directed by Angela Robinson, ‘Professor Marston and the Wonder Women’ has attracted the ire of the Marston family, who dispute the story told in the film, and has rather unfairly gone on to be one of the worst performing films of all time. Perhaps the public appetite for all things Wonder Woman is not as voracious as the filmmakers thought, but there is a lot to enjoy throughout ‘Professor Marston and the Wonder Women’, even if some elements of the film end up being rather heavy-handed.
The cast do a great job of bringing the characters to life, and rightfully, the female leads – Rebecca Hall and Bella Heathcote – seem perhaps to be having all the more fun with their roles; Hall as the “Grade A bitch” Elizabeth, who is no nonsense and proud, and unafraid to speak her mind, and Heathcote as the stubborn but charming ingénue who throws the Marston’s world into chaos. Luke Evans does well as the titular Professor Marston, and the three lead actors have strong chemistry together, which helps to sell the rather unusual life that he family were living.
As writer, Angela Robinson frames the story of the film around Marston having to justify his character Wonder Woman to representatives of the Child Study Association of America in 1947, with much of the film’s story being then told in flashback. The testimony is an interesting hook for the film to hang on, and this allows Marston’s character, and the flow of the story to be dictated by the hearing. The story struggles from time to time, as reluctance and fear begin to slow the pacing of the film down, and there are some rather heavy handed elements throughout; such as the inspiration for Wonder Woman’s invisible jet, and her iconic bracelets. As well as this, the script spends much of the final act jumping through time, leaving the film feeling choppy and rather unfocused.
As director, Robinson coaxes strong performances from her actors, and it is clear that the three worked well together on set. It is this chemistry that carries much of the film, especially when other elements of the film begin to feel a little less than satisfactory. The film is well paced for the most part, but too much focus on fear and reluctance mean the film slows down from time to time, and the film struggles to recover from these missteps. As well as this, Marston’s invention the lie detector is often used as a form of foreplay throughout the first act of the film, which soon becomes tiresome and repetitive. That said, the film never casts judgement or a critical eye on the characters who live in a polyamorous relationship, and for that, it is to be praised.
In all, ‘Professor Marston and the Wonder Women’ feels a little like it is taking advantage of a current trend at the box office, and although the idea of three people living polyamorously in the 1930s and 1940s is fascinating, this is never truly explored in an emotionally satisfying way. As well as this, there are times when the use of Wonder Woman iconography feels a little obvious and heavy handed, but the chemistry between the three leads is wonderful, and it is clear they are enjoying telling this unconventional story. A stronger focus and a clearer idea of just what the film is trying to convey, however, would have led to a more satisfying film.
RATING: 3/5
Review by Brogen Hayes