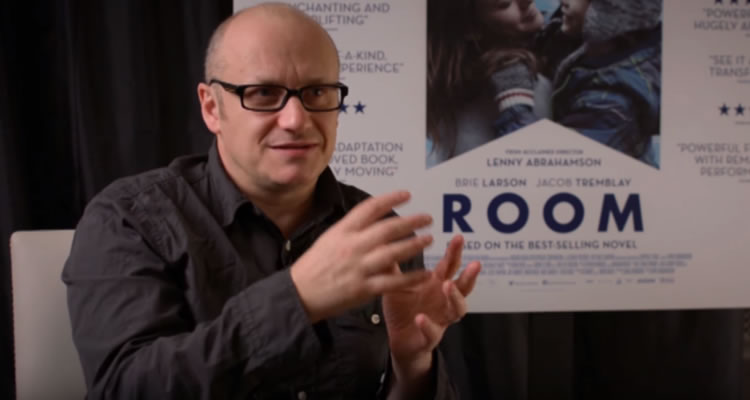 As Lenny Abrahamson’s Frank is accepted for next month’s Sundance, we talk to delighted producer Ed Guiney about high expectations, festival fever and playing down a film’s greatness. It’s not like Ed Guiney isn’t aware of how important a major festival nod can be for a small film.
Having delivered the likes of THE GUARD, THE MAGDALENE SISTERS, FIVE MINUTES OF HEAVEN and THIS MUST BE THE PLACE, Guiney has seen again and again the boost a major film festival can bring. And Sundance has become something of a lucky charm for the Irish producer.
Having only submitted his latest offering, FRANK, to the Sundance committee in October, this quirky comedy inspired by a 1980s cult comic creation got the thumbs up in a matter of days. Of course, when you’ve got a cast that includes Michael Fassbender, Domhnall Gleeson and Maggie Gyllenhaal, and a director like Lenny Abrahamson (ADAM & PAUL, WHAT RICHARD DID), well, the expectations were always going to be high.

How important is it, landing a spot like this at Sundance?
ED GUINEY: It’s hugely important for a film like this. Being able to get out there in the world through a festival like Sundance can make all the difference. Sundance is the place for Frank really, given that the film is set in America, the actors that are in it are just the sort of actors that Sundance love, so, it’s always been our dream that this would be the film’s debut. It’s daunting too, of course, given that no one has seen the movie yet, and we’re in the Eccles Theatre there, which is a twelve-hundred seater – it’s a big room, you know – so, it’s daunting. Just hoping that people enjoy it, and that it gets a healthy launch there.

What is the process in audition for Sundance? Is it the script? A rough cut? The cast?
EG: We’ve had quite a few films there – THE GUARD, FIVE MINUTES TO HEAVEN, THIS MUST BE THE PLACE, SHADOW DANCER – and it’s really just a case of submitting your film. The trick is to submit it as late as possible, so the film is as ready as you can make it, but they also need time to watch it and select it. But we sent it to them in October, and they actually came back to us within a week to offer us a spot. They were very keen on it, which is great. They get thousands and thousands of submissions from all around the world, so, it’s hard to nab that spot…

Still trying to get my head around the idea that this 1980s cult creation Frank Sidebottom – the bastard offspring of John Shuttleworth and The Residents – should be the basis for a feature film starring Michael Fassbender. Were there drugs involved in the writing of this script?
EG: Not that I’m aware of. Basically, Jon Ronson was in The Frank Sidebottom Band, and it’s inspired by that time, and that character, rather than being a biopic. Which it isn’t. The Frank in our film is an entirely different character, but it would have been inspired by that idea of the outsider musician and the underground genius, the ones who tend to make music that little bit more intriguing when you go digging.

Would the family or the estate of Frank Sidebottom’s late creator, Christopher Sievey, have to grant permission here? Would they have to approve the script?
EG: Yeah, we’ve been in touch with them, and they know what we’re doing, and they’ve been with us all through the journey, and all that.

You’ve got young Lenny behind the camera, you’ve got Michael Fassbender, Domhnall Gleeson and Maggie Gyllenhaal on the other side – the expectations, critically, are going to be pretty high here. Nervous?
EG: The truth is, it’s always very nerve-wracking. You have no idea how people are going to react, and although you may think the film is really, really good, it’s for others to judge. You can’t predict, you can’t. You know that. You might go into a film really wanting to love it, and it just isn’t there. There’s no such thing as a sure thing in this business, and all you can do is make the best of it. Once you feel good about what you’ve done, the rest of it is just out of your hands.

There is also that hurdle for a film when it’s Irish. The hardest kind of film to sell to the Irish, it often seems those abroad have a lot more tender loving care for our cinematic offerings.
EG: It varies from film to film. With Frank, in the most general terms, it’s the sort of film that would probably appeal to those who like Wes Anderson movies, or Michel Gondry movies, or Spike Jonze movies – it’s in that world. It’s comedy, but it’s quite offbeat in a way, quite eccentric. So, it’s not a mainstream, down-the-line, Richard Curtis offering, and there’ll be a certain kind of expectation that comes with that. We don’t expect to gross a hundred million dollars, and that’s the truth of it. It will have an audience though, and it’ll hopefully have it fans. With a film like Frank, there is a chance that it may hit bigger abroad than at home in Ireland, but either one would be fine by me. A large part of that comes down to how it’s marketed. It’s an Irish film, given that the director is Irish, the cast are largely Irish, and the production company is Irish, but, there are no Irish characters in the film. Domhnall plays an Englishman, Michael plays an American, and the band are American too. So, it’s not an Irish film in its story, just in its DNA. The Irish Film Board were on board, of course, as we shot the film here, and that will always make you hopeful that the film is a success in Ireland. If even just for that all- important home pride.

Do you ever get flashes of Harvey Weinstein control freakery, and demand a new cut of a finished film? There must be plenty of times when you could hold a young filmmaker to ransom…
EG: Oh, I don’t think I could ever quite muster up that Harvey Weinstein roar, but you do want what’s best for the film. And that means sometimes have disagreements with a director. Once it’s for the best of the film, I think everyone can understand the need to bang heads occasionally. I don’t carry any scissors around with though, if that’s what you’re asking.

What’s the release plan for Frank?
EG: There are a few territories sold, two of the key ones being Ireland and UK, with the plan being to release it late spring, early summer. The international release will be dictated by the film’s reception at Sundance. What I’m hoping will happen is that after the Eccles screening, every American distributor will go nuts, trying to buy the film, and we get into a mad bidding war. And then they release it to great success, of course. So, you start there, and work your way back down. It’s only starting now, so, Sundance will be crucial to the life the film has ahead of it.