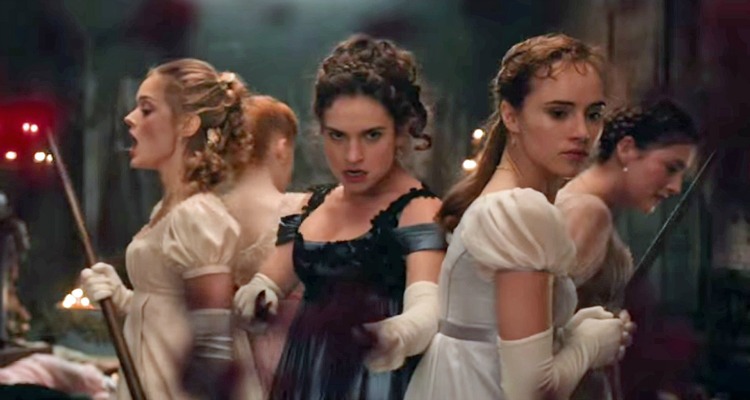 Pride and Prejudice and Zombies – a history

‘Pride and Prejudice and Zombies’ is released in Irish cinemas this week. The film is a retelling of Jane Austen’s classic love story between Elizabeth Bennet and the aloof Mr Darcy… But where do the zombies come in?

To celebrate the release of ‘Pride and Prejudice and Zombies’, Movies.ie have taken a look back over the history of this rather bizarre, rather brilliant blend of classic romance and the undead.

THE ORIGINAL STORY
First published in 1813, ‘Pride and Prejudice’ is an examination of environment and upbringing on the morality and character of young people at the time, as well as examining the notions of marriage and the accumulation of wealth. The book is a love story between the mismatched and equally proud Elizabeth Bennet and the mysterious Mr Darcy, who have to overcome their own preconceived notions of one another in order to move forward in their lives.

THE PARODY
In 2009, Quirk Books published the rather cumbersomely titled ‘Pride and Prejudice and Zombies’, which blends Austen’s original novel with elements of modern zombie fiction. The authors are named as Jane Austen and Seth Grahame-Smith and, since the copyright on Austen’s work had long since passed into the public domain; Grahame-Smith didn’t even have to ask the permission of the author’s estate before throwing zombies at Austen’s feminist heroines.

The book came about when Quirk Books editor Jason Rekulak began combining classic novel titles with the horror creatures that so fascinate contemporary audiences – vampires, werewolves, zombies and the like. Grahame-Smith became involved with Rekulak passed the project to him. In an interview with Time Magazine, Grahame-Smith says that Rekulak called him one day and said ‘“I have is this title, and I can’t stop thinking about this title”. And he said: ‘Pride and Prejudice and Zombies’. For whatever reason, it just struck me as the most brilliant thing I’d ever heard.’ And thus the horribly comedic horror mashup novel was born.

The book performed incredibly well, capturing the imagination of readers as it zoomed into the top three of the New York Times bestseller list, needing a second printing before it was even released at this side of the Atlantic.

THE INFLUENCE
After the popularity of ‘Pride and Prejudice and Zombies’, a flurry of parody mashup novels were released, including ‘Sense and Sensibility and Sea Monsters’, ‘William Shakespeare’s Star Wars Trilogy’ and another of Grahame-Smith’s works; ‘Abraham Lincoln, Vampire Hunter’, which has already been made into a feature film.

THE MOVIE
So where did ‘Pride and Prejudice and Zombies’ The Movie come from!? Well not long after the book was released in 2009, it was announced that the novel would be made into a big screen adventure, with Natalie Portman playing Elizabeth Bennet and David O. Russell directing. Various cast and crew changes followed, with ‘Igby Goes Down’ director Bur Steers taking over as director, and Lily James playing Elizabeth Bennet with Sam Riley taking over the role of Mr Darcy. Matt Smith, Lena Headey and Charles Dance round out the rest of the cast.

Sound good? ‘Pride and Prejudice and Zombies’ is released in Irish cinemas on February 11th 2016; just in time for Valentines Day! Watch the trailer below…