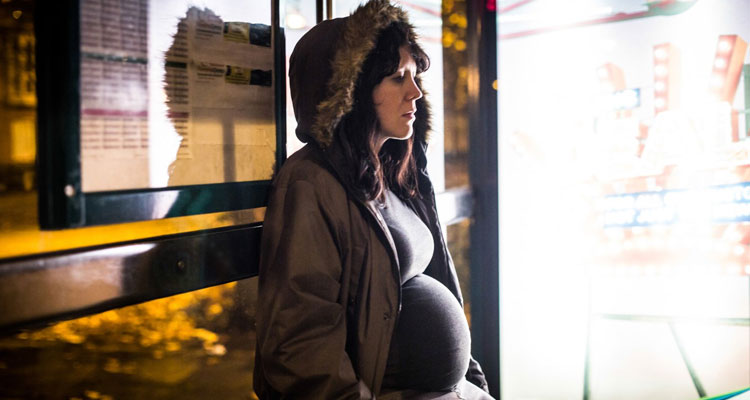 PREVENGE (UK/16/88mins)
Directed by Alice Lowe. Starring Alice Lowe, Gemma Whelan, Kate Dickie, Jo Hartley, Tom Davis
THE PLOT: Believing that she is receiving messages from her unborn daughter, Ruth (Alice Lowe) sets out on a bloody rampage of revenge against those she believes to have wronged her, and her family.
THE VERDICT: ‘Prevenge’ is the first feature length film directed by Alice Lowe and is as dark, twisted, and subversively hilarious as you would expect it to be, being that this film comes from the actress previously seen in Ben Wheatley’s ‘Sightseers’, ‘Black Mountain Poets’ and TV’s ‘Inside No. 9’.
Alice Lowe leads the cast as Ruth, making her a woman who can fall into the role of almost anyone she wants to be – mother pet shopping for her son, night clubber, interviewee – and it is this, combined with her absolute lack of qualms or remorse over her killings spree that makes her fearsome. Of course, since the character is heavily pregnant, an element of vulnerability is immediately attached to the character, and this, combined with Ruth’s late stage doubts about what she believes her unborn child is bidding her do, makes for a surprisingly rounded, if damaged, character; the kind that Lowe plays best. The rest of the cast features Gemma Whelan, Kate Dickie, Jo Hartley and Tom Davis.
Alice Lowe’s screenplay for ‘Prevenge’ is filled with gruesome moments and darkly hilarious situations, but it is in creating a vulnerable, terrifying character that the film excels. Pregnancy is normally portrayed as something life affirming, that creates a sense of nurturing in a person, and by making Ruth a pregnant killer, ‘Prevenge’ not only turns expectations on their heads, but makes the film dark and subversive.
As director Alice Lowe manages to create some incredibly, and deliberately, annoying characters on screen, all while giving Ruth a sense of being an avenging angel. It is difficult not to root for Ruth – even as we are unsure what has prompted her killing spree – as Lowe makes her identifiable, funny and with a twisted but real sense of justice. The killing scenes are as violent and bloody as you would hope, and those who are faint of heart or not fans of black comedy may struggle, but there is a sense of joy around ‘Prevenge’ that is hard to create, yet utterly irresistible. A stronger narrative and back story may have helped the film, but with the fearless Alice Lowe at the helm, ‘Prevenge’ is a dark, ugly and brilliant treat.
In all, ‘Prevenge’ is a dark, bloody and often hilarious film about a pregnant woman seeking justice, prompted by the demands of her unborn baby. Most of the characters in the film are utterly unlikeable, but it is difficult not to root for Ruth as she searches for revenge and the truth. A fantastic debut from Lowe as a director.
RATING: 4/5
Review by Brogen Hayes