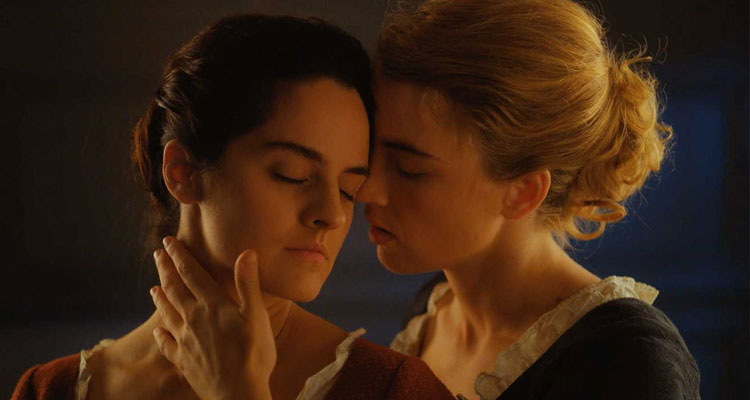 Portrait Of A Lady On Fire

In short: A classy affair

The Plot: Brittany, the late 18th Century. Marianne (Noemie Merlant) is a painter of some regard who arrives on a remote island. Her job is to create a painting of young noblewoman Heloise (Adele Haenel). The painting will then be sent to her intended husband in Milan. Heloise isn’t keen on an arranged marriage and has defied other painters and ruined their paintings. Her mother La Comtesse (Valeria Golino) therefore wants Marianne to paint covertly and from memory. Marianne poses as a companion for Heloise, observing her behaviour and her determined demeanour. The two become drawn to each other, defying the conventions of their time…

The Verdict: Over only four films so far, Celine Sciamma has established herself as one of France’s foremost female directors. Not yet 40, she’s shown a keen eye for contemporary female-driven stories such as her acclaimed teenage drama Girlhood. For her latest film Portrait Of A Lady On Fire, she’s rewound the clock to late 18th Century France to explore the role of women in a time that prefers to keep them pretty and in a pre-set box ready for marriage. She also explores how sexuality comes into play as a further act of defiance against the accepted norms of this society. It’s a feminist take with no male characters of any real note, instead building up a tentative romance between its two women. It’s all the better for it.

Sciamma won the Best Screenplay award at Cannes last year for her new film. As the film settles into its own rhythms and patterns, it’s clear that Sciamma’s literate script is focused heavily on what draws these women together rather than settling for a fully-formed and potentially scandalous romance. It’s a script that shows a remarkable level of restraint, not just in its characterisation but also in the way this brief encounter develops through observations on each other’s behaviour. A finger touching a mouth here, a stolen glance there, an awkward blush at the right moment. The look of love has never looked so refined and restrained. It’s well over an hour before anything serious happens. This lady on fire is a slow-burner, but when the fireworks start then it really crackles.

As the story develops further past the first hour, Sciamma’s script explores the potential of this romance. She has stated that she wanted to create a love story based on equality, where the status of the characters does not solely define them. They are defined by their own personalities and behaviour, even the maid Sophie (Luana Bajrami). Sciamma rounds out the film on a powerful note, holding the camera for a long take which is full of meaning for what came before. It’s not just the script that catches fire here. The film looks ravishing, with her painterly 8K cameras moving from interiors of a stately house to a windswept coastline and beyond. The performances are equally impressive, with Merlant and Haenel investing in their characters and the physicality of keeping things discreet between them. It’s a classy and sensual cinematic affair all round, with a modern touch that doesn’t come across as anachronistic.