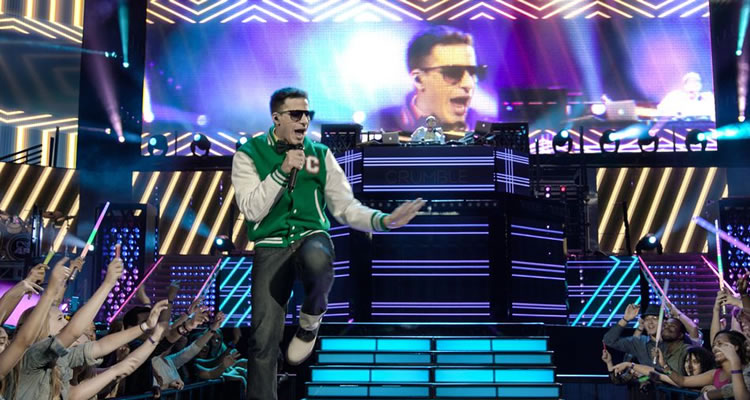 POPSTAR: NEVER STOP NEVER STOPPING (USA/16/87mins)
Directed by Akiva Schaffer and Jorma Taccone. Starring Andy Samberg, Sarah Silverman, Maya Rudolph, Joan Cusack, Tim Meadows
THE PLOT: In the run up to the release of his second solo album Conner 4 Real (Andy Samberg) finds his charmed life beginning to fall apart; critics slate his new album, his tour is not sold out and his friends are beginning to drift away. In a desperate attempt to hold on to his celebrity status, Conner and his management team turn to more and more desperate measures.
THE VERDICT: ‘Popstar: Never Stop Never Stopping’, brought to us by the Lonely Island Boys, is not a particularly subtle comedy, and it is reminiscent of ‘This is Spinal Tap’ in more than one way, but there is a charm to Andy Samberg’s lead character, and although there are times when the film runs out of steam, it is sharply observed and often very funny.
Andy Samberg, Jorma Taccone and Akiva Schaffer take on the roles of Conner and the former members of the boyband that shot them all to fame before they split and Conner went solo. They all do fine in their roles, with Samberg coming off the best as the bratty, spoiled pop star who is all too happy to forget about the friends he rose to fame with. The rest of the cast features Sarah Silverman, Maya Rudolph, Imogen Poots, Joan Cusack, and Tim Meadows, and they are joined by a host of musicians in cameo roles, including Ringo Starr, Pharrell Williams, Seal RZA, Danger Mouse, Arcade Fire, Michael Bolton and Mariah Carey, as well as a small but hilarious performances from Emma Stone, Will Arnett, Justin Timberlake and Bill Hader – basically, all the friends that Samberg has made from ‘SNL’ and ‘Brooklyn Nine Nine’.
The story, written by Samberg, Schaffer and Taccone, is more than a little reminiscent of ‘This is Spinal Tap’, even using a similar story arc to the classic mockumentary, but obviously the lead character is inspired by Justin Timberlake, Justin Bieber and any other bratty pop star you care to name. The jokes come thick and fast, many of them landing better than others, and some of the cameo moments are real standouts. The comedy is not subtle or particularly smart, but it is well observed and well timed, and there is not a lot more that could be asked. The songs are ridiculous but work, and the many references to pop culture incidents give the film a fresh feel, and allows the audience to feel as though we are in on the joke.
As directors, Akiva Schaffer and Jorma Taccone do well with their first feature in several years, both have recently directed for TV, and Schaffer previously brought us ‘Hot Rod’, while Taccone helmed ‘MacGruber’ in 2010. The film is well paced and the jokes are carefully placed to hit at the right time, while being set up in such a way that references back to them work well. The cameos come thick and fast, but they work for the tone of the film, and Will Arnett’s parody of TMZ’s Harvey Levin is a stroke of comic genius.
In all, ‘Popstar: Never Stop Never Stopping’ is about as mature and subtle as you would expect from an Andy Samberg film, but it is also funny, well observed and has some of the best celebrity cameos since ‘Absolutely Fabulous: The Movie’. OK, so not that long, but still great.
RATING: 3.5/5
Review by Brogen Hayes