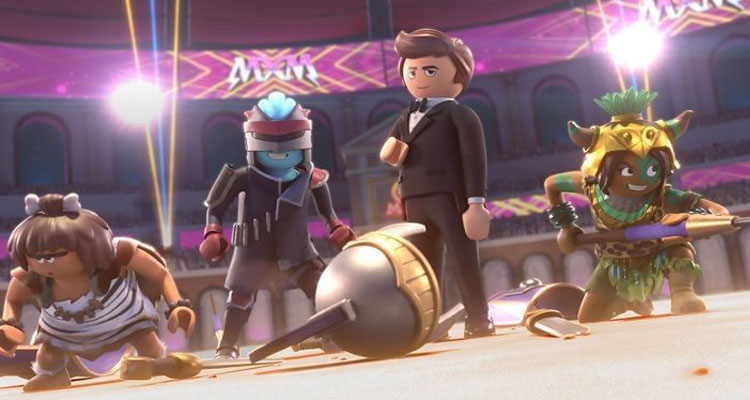 The Plot: Several years after the death of their parents, Marla (Anya Taylor-Joy) and her kid brother Charlie (Gabriel Bateman) are still living together. Marla dreams of travelling the world, while Charlie is rebellious and wanders off one night to a toy convention in New York. Marla tracks him down and something magical happens – they’re both sucked into the world of the Playmobil toy. Marla is now in toy form, while Charlie is a bearded viking. When they get separated, Marla sets off on a quest to find him. This will take her through many varied landscapes, with the help of dashing secret agent Rex Dasher (Daniel Radcliffe). At the same time, she’s watched over by the Roman Emperor Maximus (Adam Lambert), who has schemes of his own…

The Verdict: Here we go again. Another animated movie for children and families based on an existing toy. The Lego Movie, its sequel and the other spin-offs in that franchise are an obvious influence on Playmobil: The Movie. The Lego-like world-building toy founded in Germany in 1974 has branched out into its first foray into the altogether different world of film… with decidedly underwhelming results. Initial accusations that The Lego Movie was just one big product placement were swiftly set aside when the film came out. Sadly, the same cannot be said for Playmobil: The Movie. It’s a 97-minute toy advertisement built around a daffy concept that isn’t given a modicum of logic. Not that children will notice too much, but adults might find its constantly-moving plot weary and needing a lot more attention to its characters and their motivations.

In a sense, this Franco-German production is a faux-American film in order to capitalise on a wider international market. With the exception of Aardman Animations and Cartoon Saloon, most European-produced animation pales in significance and quality compared to what’s coming from across the pond. Playmobil: The Movie is typical of this. It begins rather bizarrely with Anya Taylor-Joy belting out a sunny tune, as if she’d just walked off the set of a Disney musical rather than the more challenging Glass. What she’s doing in this film is a mystery indeed. However, she does ground the film and the central relationship with her onscreen brother. When the film switches into animation, there are some initial laughs to be had at their transformations into toys… but that narrative momentum is squandered by first-time director Lino DiSalvo.

DiSalvo separates the duo and then introduces a revolving-door of characters from the Playmobil world, from cowboys to pirates to centurions to dinosaurs to just about everyone possible. Characters come and go at will, especially the self-loving secret agent Rex Dasher. With a bit more screen time for the character and Daniel Radcliffe’s spot-on voicework, he could have been this film’s answer to Duke Caboom. Adam Lambert’s Monty Python-style Emperor could have been used more as well, instead of just being a background villain. There isn’t even consistency in the chunky animation, which is decent enough but introduces characters who appear to have stepped in from another film altogether. There’s a general air of laziness about this film, which prompted yawns and restlessness from the family next to this reviewer. Not a good sign.

Playmobil: The Movie is just about passable as family entertainment. With the market already saturated with plenty of other, better options this film really needed to try harder to win its audience over. Instead, it’s a mostly charmless and humourless attempt to turn a toy into a movie franchise. It lacks that magic spark necessary to make it more than just obvious product placement.