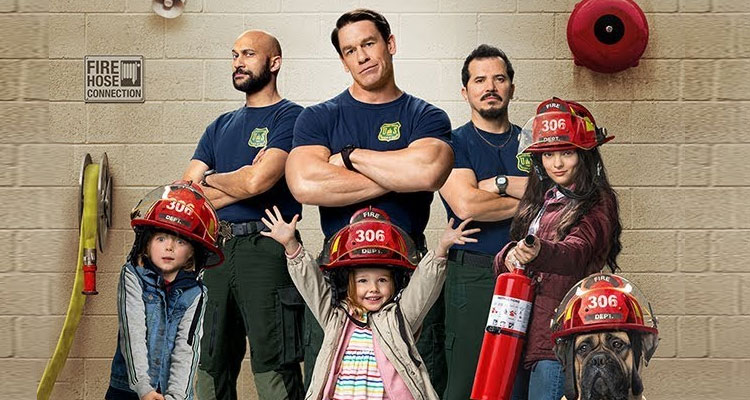 In short: Sputters out

The Plot: Tackling raging Californian wildfires is all in a day’s work for ‘smokejumper’ Jake (John Cena). A self-described slightly cooler fireman, he and his team jump into fires to rescue people. Half his crew bail though to take up an even more challenging job further near the coast, leaving him with wannabe chef Rodrigo (John Leguizamo), fussy Mark (Keegan Michael-Key) and man-of-few-words Axe (Tyler Mane). That’s the least of his problems though. When he rescues teenager Brynn (Brianna Hildebrand) and her two young siblings from a burning house, they hole up at the firehouse until their parents arrive. That’s when all manner of child-related chaos breaks out, disrupting Jake’s carefully ordered and regimented environment…

The Verdict: When asked about his thoughts on his new film Playing With Fire, rugged wrestler-turned-actor John Cena said ‘there’s poopie stuff in it’. It’s a family-friendly film after all, so out comes that toilet-related humour that kids seem to love. Though, it’s reassuring to know that there’s as much flatulence going here as in the altogether different The Lighthouse. Produced by Nickelodeon, Playing With Fire plays out like a feature-length pilot episode for a TV sitcom. The set-up is all there: four macho ‘smokejumpers’ who live ordered lives in the wild and deal with life-threatening fires quickly come undone via three mischievous but good-natured kids. Choking on smoke and pulling out bodies is nothing compared to having their firehouse turned into a playhouse by these playful kids, softening their hearts in the process and turning them into blubbering man-babies.

That’s pretty much your lot when it come to Playing With Fire. That’s not to say it’s without its charms though. Seeing grown men reconnect with their anarchic inner child and enjoy marathons of My Little Pony while eating birthday cake is an amusing prospect. The adult cast pretty much go for broke on the concept, none more so than Cena. Often cast in dumb lug / beefcake roles, he has a natural ability for comedy and suffering through all kinds of undignified scenes in a dignified manner e.g. his overly concerned parent in Blockers. Jake is in a similar vein, a man who is all about order and doing his firefighting job in a professional manner… but doesn’t know how to handle the more terrifying prospect of a small child who won’t stop screaming. He anchors the film well, with good support from John Leguizamo as a frequently misquoting colleague and Keegan Michael-Key as a needy colleague who is more down with the kids. The ever reliable Judy Greer brings some cutesy charm too, as a toad-loving scientist.

The scenarios and scrapes that the kids and their temporary adult guardians get into here are a source of amusement, like a mishap in the garage that leads to a foam fight that has to be seen to be believed. It starts to wear thin though and by the third act one is hoping for some action-based sequence that sees our characters return to their actual job before a final farewell to their charges. Instead, director Andy Fickman seems content to just offer more of the same until the story sputters out to an ending that is boringly predictable, setting up a potential spin-off sitcom. It’s disappointing when one realises that after a promising start and mid-section, the film doesn’t really have more to offer than this pat ending. Still, Playing With Fire has its moments and is passable enough as Christmas family viewing. Just don’t expect much from it.