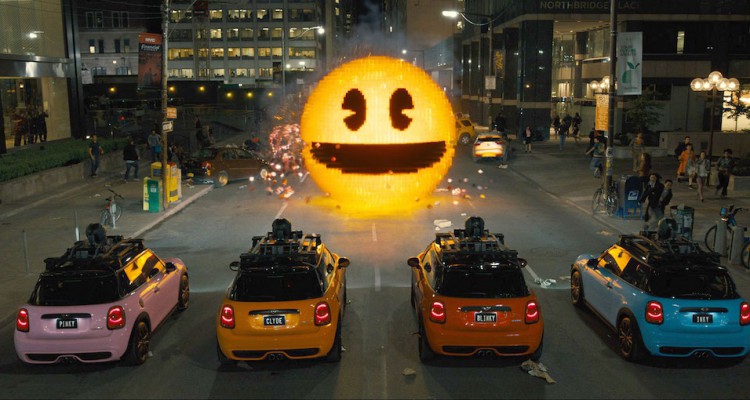 PIXELS (USA/12A/105mins)
Directed by Chris Columbus. Starring Adam Sandler, Kevin James, Michelle Monaghan, Peter Dinklage, Josh Gad, Matt Lintz, Sean Bean, Brian Cox, Jane Krakowski, Dan Aykroyd, Affio Crockett, Tom McCarthy.
THE PLOT: In the summer of 1982, Brenner (Adam Sandler) and his friends compete in a video game championship, only to be beaten to the title by Eddie Plant (Peter Dinklage). Footage of the event is put into a capsule and sent into space, for aliens to see what life on Earth is life, and promptly forgotten about. Over 30 years later, Brenner is installs tech for a living and his best friend Cooper (Kevin Jams) is the US President. When aliens attack in the form of classic arcade game characters, Cooper turns to his best friend for help and, with the help of some old friends, band together to stop the aliens the only way they know how; by playing to win.
THE VERDICT: Based on a short film by Patrick Jean, PIXELS sounds like a wonderful idea for a film, but by adding a romantic storyline and familiar characters, this slice of wonderful quickly becomes familiar and safe.
Adam Sandler is in the lead here, and if you have ever seen a film with Adam Sandler you will know that he generally plays brash, misogynistic, unappealing men who generally get the girl. The same is true for Brenner in PIXELS. Kevin James is slightly more endearing as Cooper and Josh Gad does the best from the central three as he plays a video game playing conspiracy nut, but manages to make him just about likeable. Peter Dinklage camps it up as Eddie Plant and seems to be the only one who is aware of the silliness of the film he is in. The rest of the cast is made up of Michelle Monaghan, Fiona Shaw, Jane Krakowski, Brian Cox and Sean Bean.
The story is reminiscent of the FUTURAMA story ‘Raiders of the Lost Arcade’, which formed part of the ‘Anthology of Interest’ in Season 3 of the show. Tim Herlihy and Timothy Dowling’s screenplay sees aliens attack Earth in the form of video game characters, and it is up to those who dedicated their childhoods to classic arcade games – and not much else – to save the world. The trouble is that while the idea for the film is a great one, some of the dialogue in the film is so bad, the characters underdeveloped and so many plotholes abound – why didn’t they ever think of just talking with the aliens!? – that the greatness of the idea is lost in the general melee of the usual Adam Sandler movie formula.
Director Chris Columbus does not do anything particularly out of the ordinary here; the childhood scenes feel like they had a considerable focus from the director, but as soon as we go into the present day, PIXELS feels as though it could have been directed by just about anyone. That said, the action sequences in the film are a lot of silly fun – who doesn’t want to see Peter Dinklage chasing Pac-Man in a Mini? – but the film is let down when the characters actually have to talk to one another.
In all, PIXELS is a wonderful idea for a film, but is let down by a typical Adam Sandler movie plot being shoehorned into the action, complete with misogynistic dialogue and clichéd storylines. Still the music, which includes Hall & Oates and Tears for Fears, is pretty darn good, and the action sequences are a lot of fun. Shame about the rest.
RATING: 2/5
Review by Brogen Hayes