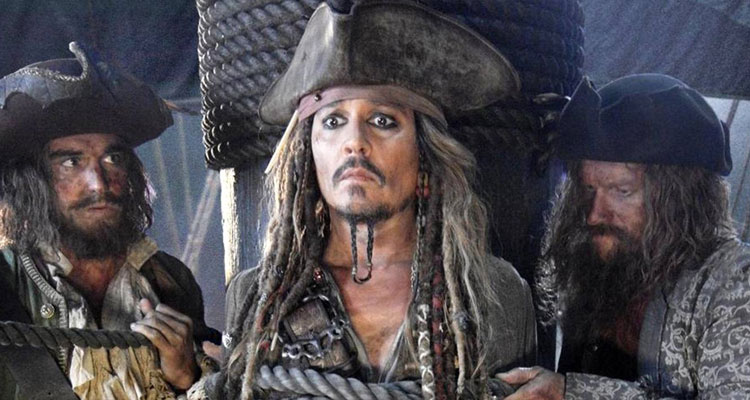 Pirates of the Carribbean: Salazar’s Revenge

PIRATES OF THE CARIBBEAN: SALAZAR’S REVENGE (USA/12A/129mins)
Directed Joachim Ronning, Espen Sandberg. Starring Johnny Depp, Geoffrey Rush, Javier Bardem, Brenton Thwaites, Kaya Scodelario
THE PLOT: A rebel without a crew, Captain Jack Sparrow (Depp) is in need of some luck. That it happens to be bad luck should hardly be surprising, as teenager Henry Turner (Thwaites) – son of living dead adventurer Will Turner (a brief opening cameo from living dead actor Orlando Bloom) – unwittingly unleashes an old nemesis, pirate slayer Armando Salazar (Bardem), on his tail. The race to find the Trident of Poseidon is on, with happily, richly retired Captain Hector Barbossa (Rush) dragged into a find-or-death bargain with the vengeful, hateful Salazar. Everybody’s got a curse to shake, and pretty much everyone blames Sparrow for their misfortune. Except, perhaps, bright young thing, Carina Smyth (Scodelario, channeling Keira Knightley when she was full of hope and dreams), a woman of science who, naturally, keeps getting condemned a witch by those bastard British colonists…
THE VERDICT:

Despite many, many odds – being the fifth film in a trilogy – ‘Salazar’s Revenge’ turns out to be something of a hoot.
Largely, cleverly, a remix of 2003’s debut outing, ‘The Curse of The Black Pearl’, all the ingredients are here for a rollicking good time. A beautiful baddie in the jigsaw-shape of Javier Bardem’s vengeful ghost Captain Salazar, the big-budget, big ocean, National Geographic vistas (both above and under water), the reluctant young, feisty lovers, and the return of Depp’s Indiana Richards turn.
Still, for a good panto, you need more than just a loveable hero – you need a baddie you’d happily bring home to shock mother. And Bardem, unsurprisingly, fits the bill deliciously, his Salazar sure to give at least one kid per screening a nightmare or two. Nice.
RATING: 4/5
Review by Paul Byrne