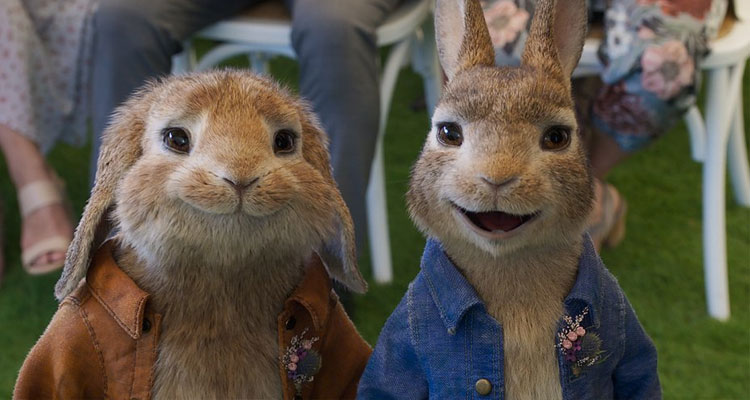 The Plot: Peter (James Corden) has calmed down somewhat. Now at a truce with the uptight Thomas (Domhnall Gleeson), the duo will have to work together in peace if the wedding of Thomas and Bea (Rose Byrne) is to pass off without incident. Bea is a promising children’s author, using Peter and his rabbit friends as inspiration for a series of books for publisher Nigel (David Oyelowo). While in London, Peter gets sidetracked and goes on his own runaway mission with a group of animal thieves. Ever the mischief-maker or the bad seed (depending on Nigel’s point of view), Peter will have to smooth things out once again with Thomas…

The Verdict: Based on the Beatrix Potter stories, the CG-enhanced live action film ‘Peter Rabbit’ struck a chord with audiences a few years ago. It earned several farms’ worth of vegetables for Peter and his friends to gorge on. It had an anarchic tone and cheeky-chappie voice work from James Corden, with Irish actor Domhnall Gleeson having immense fun in bad guy mode once again. That was then, this is now. The sequel ‘Peter Rabbit 2: The Runaway’ has arrived and returning director Will Gluck offers more of the same fun for a family audience. Which is fine, if that’s what audiences want, but this reviewer was hoping for something more imaginative.

The cold war between Peter and Thomas has thawed somewhat, so now they have an understanding and are working together. Sort of. Never content to sit still or be stuck in routine, Peter finds himself in a city scrape among the cityscape of London. With a nod to Charles Dickens (referenced throughout), Peter falls in with the wrong crowd and plans a heist at a farmers market. Meanwhile, Bea contends with publisher Nigel. He has other ideas for the Peter Rabbit books, franchising every shake of the tail out of them. Peter Rabbit In Space? Why not for a publisher who greenlit Butterflies vs Zombies. Nigel is ostensibly the bad guy here, but he’s in the minor leagues. He’s hardly an evil property developer intent on knocking down an animal hospital or a children’s orphanage. He’s just a smarmy opportunist.

Gluck’s direction aligns itself closely to that same excess, not knowing where to stop. Bigger and faster is not necessarily better for a sequel, throwing together one hurried sequence after another in the hope that audiences won’t notice holes in the script. What about the simplicity of Peter throwing a tomato at Thomas? There’s a glut of new animal characters to meet, but only one really makes an impact (an old-timer who likes to reminisce). Rose Byrne is given less to do and Corden comes across as a little smug this time around.

The saving grace is Domhnall Gleeson, who throws himself into his role with no shame and pinballs about with a manic energy that keeps the film afloat. Watching him frolic down a hill is a highlight and delivers the biggest laugh. If only there were more of them.  Kids will love it and it’ll make millions in vegetables (it’s already a hit in the UK). Peter Rabbit 3: Hopping In Space anyone?

Directed by Will Gluck.