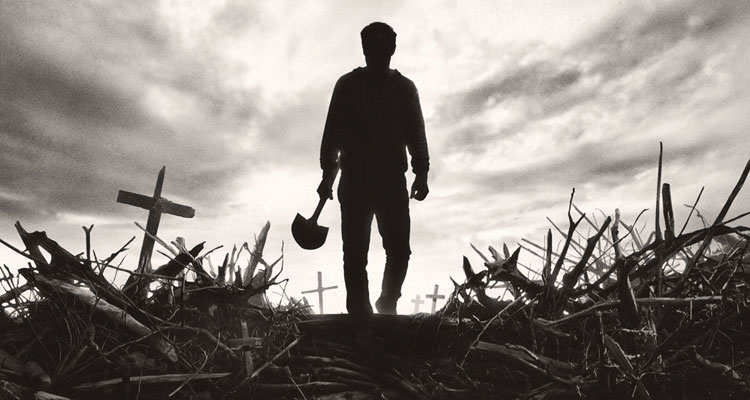 The Plot: Doctor Louis (Jason Clarke) and his wife Rachel (Amy Seimetz) move their two young children Ellie (Jete Laurence) and Gage (Hugo / Lucas Lavoie) from Boston to the quieter surroundings of the Maine countryside, along with their cat Church. At least, that’s what it seems. A stretch of the highway outside their house is frequented by regular trucks. Their neighbour Jud (John Lithgow) introduces Ellie to a local tradition – the Pet Cemetery or rather Pet Sematary, where children bury their dearly departed pets. When Church gets hits by a truck, Jud takes Louis out beyond the Pet Sematary to somewhere different. A place where death is only the beginning, rather than the end. Then all hell breaks loose…

The Verdict: Of all the stories that have sprung from the dark, vast and rich imagination of Stephen King, the one that truly spooked him is not The Shining or The Dead Zone… but Pet Sematary. His 1983 novel is a spine-tingler for sure, but it’s also bleak and terrifying in its concept. Mary Lambert took a decent stab at it in the 1989 film adaptation, but it suffered from cheap production values. It was also lumbered with the not-very-scary idea of a cutesy but murderous toddler, who in one laughable scene launched from an attic like a missile. Good stories are worth re-visiting though, hence this new version fronted by Jason Clarke and directed by horror fans Kevin Kolsch and Dennis Widmyer.

The new version of Pet Sematary changes one aspect in particular – the person who ends up being killed and then getting ‘resurrected’ in the bad, stony soil. While the idea of a murderous toddler is unnerving, it doesn’t quite pass muster onscreen. Matt Greenberg and Jeff Buhler’s screenplay goes for a bolder and more credible approach towards this, while also pumping up the mythological aspects of what lies beyond the Pet Sematary. Jud hints at rumours of a Native American creature in the dark and forboding woods. What this does is move the script beyond the basic Monkey’s Paw-style resurrection into something more primal and unsettling. Evil has a very human face in this version.

How much you buy into the film depends on how much you accept Louis’ turn from grief into resolve to bring back the dead. Given that he’s a man of science, he should know the finality of death. Clarke does a good job at giving Louis a valid reason for his dark endeavours. Consumed by grief, a rational man can do irrational things. Kolsch and Widmyer slow down the bloody climax to explore Louis’ fractured mind as he willingly accepts the living dead into his family. These scenes might provoke some nervous, unintentional laughs, but they’re also uncomfortable for a reason. Death isn’t the end in this story. If that wasn’t enough, they close with a terrific, squirm-inducing shot which neatly reverses audience expectations as to what this new version might have in store.

Pet Sematary 2019 is competently directed, well-acted by Clarke and Lithgow and plays around with King’s concept with justifiable purpose. The countryside is a scary place, a fact that the co-directors stress throughout. While the film isn’t as dark or as scary as it could have been (i.e. like the book), it achieves a healthy rating on the scare-o-meter due to its use of light and shadows and the chilling effect of dealing with the living dead. As the film’s most famous line goes, sometimes dead is better. Sometimes a remake is better too.