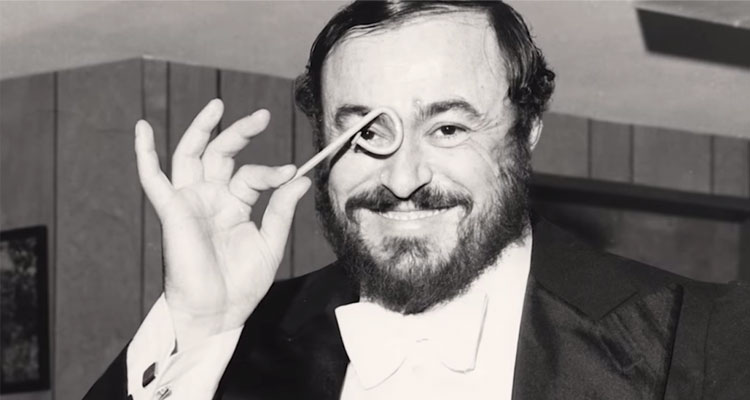 The Plot: Pavarotti charts the life of famed Italian tenor Luciano Pavarotti, from his humble origins in Modena as the son of a baker / tenor to worldwide acclaim as an international rockstar of opera. Over the course of his rich and illustrious career, he brought opera music out of the stuffy and elite opera houses and into the masses to make it more accessible. This culminated in a career-defining performance of Nessun Dorma for the 1990 World Cup in Italy, in which he sung with fellow tenors Placido Domingo and Jose Carreras. This was a man larger than life itself -in love with music, life, food and women…

The Verdict: Luciano Pavarotti was a giant in the world of opera. His ability to hit those difficult high notes and sing operas again and again with the same passion and fervour day-in, day-out made him a household name. Now Ron Howard has turned his filmmaker’s eye on this great big bear of a man, whose beaming smile, boundless optimism and grounded humanity came to define his personality on the world stage. It’s not the first time the veteran director has made documentaries about musicians he’s passionate about – he made a documentary about The Beatles a few years ago. The result is a documentary film that celebrates the life of Pavarotti, packing his richly colourful life from start to finish in under 2 hours. Frankly, there’s enough material from Pavarotti’s life to power a 6-part documentary series. But Howard’s entertaining film will do for now.

The main thing to know going into Pavarotti is that Howard plays it safe in terms of his subject. This is a straightforward rags-to-riches documentary which charts his meteoric rise on the world stage of opera to his eventual decline to ill health (rather than fall). Howard is clearly in awe of his subject and doesn’t want to rock the boat too much about Pavarotti’s personal life and two marriages, which had their own share of problems. Howard doesn’t hide Pavarotti’s infidelities and womanising, but he doesn’t exactly dwell on them either. There is only scattered newly-recorded input from his first wife Adua Veroni and slightly more from his much younger second wife Nicoletta Mantovani. These are surely the people who knew him the best and they offer some pleasant reminiscences about the man and his family. However, he never quite pushes them in the interviews to get at what made the great tenor tick.

The most insightful interview actually comes from a sweary Bono, with whom Pavarotti performed charity gigs in the 1990s. He distils what made Pavarotti’s love of music so effective – that he lived those songs throughout his life. It was more than just music to him. It became part of his being, like any truly great artist. That’s one of a number of highlights in the film. Others include: anecdotes about him bringing suitcases of Italian pasta and meat around the world (no mention of how he got them through Customs though); his friendship with an attentive Princess Diana; and how he became an ambassador of sorts for opera, even bringing it to China, which had no awareness of opera up to that point in their culture. That was Pavarotti’s greatest gift to the world – bringing opera out into the open for all to enjoy. Though, rocking out with Sting and Brian May does look a bit puzzling.

While it may not take risks with its subject and hit those higher notes, Pavarotti is a warmly reverent tribute to a tenor who at one point was bigger than anyone else in the music scene. That’s some achievement coming from the world of opera. If you ever wanted to know more about the man behind that remarkably sonorous voice, here’s your chance.