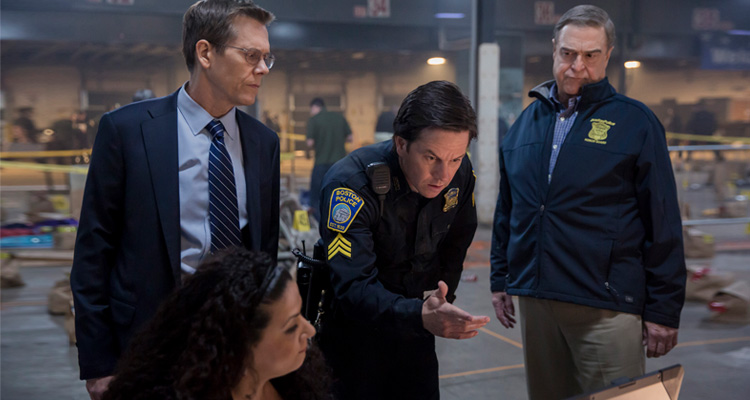 PATRIOT’S DAY (USA/15A/133mins)
Directed by Peter Berg. Starring Mark Wahlberg, J.K. Simmons, John Goodman, Kevin Bacon, Melissa Benoist.
THE PLOT: On April 15th 2013, two bombs went off at the finish line of the Boston Marathon, killing three people and injuring hundreds of others. In the immediate aftermath, as families are separated and chaos reigns, the manhunt for those responsible – Dzhokhar Tsarnaev (Alex Wolff) and Tamerlan Tsarnaev (Themo Melikidze) began.
THE VERDICT: Based on the true story of the Boston Marathon bombings, and released less than four years after the actual event, Patriot’s Day is a film that is sometimes skilful, often muddled, and unsure of who its target audience is.
Mark Wahlberg leads the cast as Boston PD officer Tommy Saunders, and carries on his career making turn as playing the down to earth every man, whose shoulders carry the story. Wahlberg is fine in the role, but we have seen him do this before. Wahlberg is joined by J.K. Simmons as Sgt Jeffrey Pugliese – who makes easy work of the only comedic moments in the film – Michelle Monaghan, Kevin Bacon, John Goodman, Rachel Brosnahan, Christopher O’Shea, Jimmy O. Yang, Melissa Benoist – who almost manages to shake off her most famous role as Supergirl – Alex Wolff and Themo Melikidze. Some of the cast of the film have more to do than others, and some do better than others, but as a whole, this is an impressive cast, which is sometimes held back by the messy way in which the story is told.
Peter Berg, Matt Cook and Joshua Zetumer’s screenplay is an amalgamation of two scripts, and although the joins are not clearly on show here, there is often too much going on for this incredible true story to flow properly. As well as the police story as the massive manhunt for the suspects gets under way, the film has to contend with the story from the Tsarnaev brothers’ point of view as well as from the perspectives of families separated at the bombing site, a long back story for the man whose car the Tsarnaevs hijacked, the MIT officer killed and the personal story of Tommy Saunders. Of course this is a far reaching story, with many thousands of people affected, but it feels as though Berg, Cook and Zetumer were apprehensive about not telling every inch of the story – perhaps because the film was made too soon? – and so left all story strands in, making Patriot’s Day a messy and meandering tale, which should have been tense and gripping.
As director, Peter Berg excels in ramping up tension and keeping the audience on the edge of their seats, but precious little of this talent is on display here. There are two sequences which show off the director’s skills, but these soon fizzle out, leaving Patriot’s Day feeling long and drawn out. As well as this, the cast of the film is an impressive one, but many great actors are underused, including J.K. Simmons, John Goodman and Melissa Benoist.
In all, ‘Patriot’s Day ‘is a film that has been made far too soon after the events that inspired it, and although the blatant flag waving can be forgiven, there is little excuse for a meandering and messy film that is less tense than living through the time when the bombings and subsequent manhunt took place. As well as this, it is unclear who ‘Patriot’s Day’ was made for, and there is a feeling throughout the film that all of this was too soon, to the detriment of any potential future storytelling. A documentary on the subject could have been a lot more satisfactory, and a lot less drawn out.
RATING: 2/5
Review by Brogen Hayes

Review by Brogen Hayes
2
Too soon