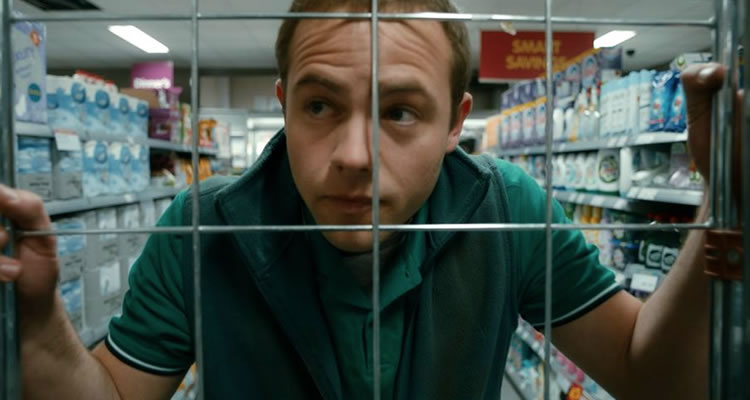 THE PLOT: We open on Saint Patrick’s Day, Dublin, and Maura Fitzgerald (Fox) is taking her son, Patrick (Dunford), out from his care home for the day so they can celebrate his birthday. It’s an annual tradition, and the now-27-year-old Patrick knows the happy drill – hotel, silly wigs, parade, cake, fairground. Only this year, Patrick gets lost, on the ferris wheel, and as mum runs to the nearest Garda station (finding little solace in Philip Jackson’s dry detective-cum-budding-stand-up), Patrick finds himself being taken under the wing of self-destructive air hostess Karen (Walker). One beautifully-lit cherry-pop later, and all hell breaks loose, the lovestruck Patrick quickly realising that his mother is determined to be the only woman in his life. So much so, she’s prepared to do just about anything to keep it that way…

THE VERDICT: Talk about a great leap forward. Having rubbed up many a critic the wrong way – and a handful the right way – with his no-budget 2011 debut Charlie Casanova, Irish writer/director Terry McMahon has come a long way, baby, with his second feature. Already a festival favourite around the world (picking up awards from Cork and Galway to Woodstock and Berlin), Patrick’s Day may take about 20 minutes to find its feet (Walker struggles with the faux-Marlowe lines; Jackson is mildly ridiculous as the drowning/laughing policeman), but once it does – when the rug is pulled from underneath us, ironically enough – it plays like a dream. A bad dream, at times, but a dream nonetheless, Moe Dunford stunning as the manchild bursting to become a childish, charming man, and Kerry Fox perfectly poised as the over-protective mother determined to block out the eternal sunshine of her son’s sudden, unexpected balls-dropping love affair.

Having worked as an orderly in a mental home, McMahon has clearly witnessed the thin line between motherly love and Oedipus hate at play here, whilst, amidst a crew that goes well beyond the call of duty (including composer Ray Harman and editor Emer Reynolds), cinematographer Michael Lavelle deserves a special mention here, tripping the light fantastically as Patrick’s tightrope between heaven and hell begins to blur.

Jaw-droppingly good. And you can quote me on that.