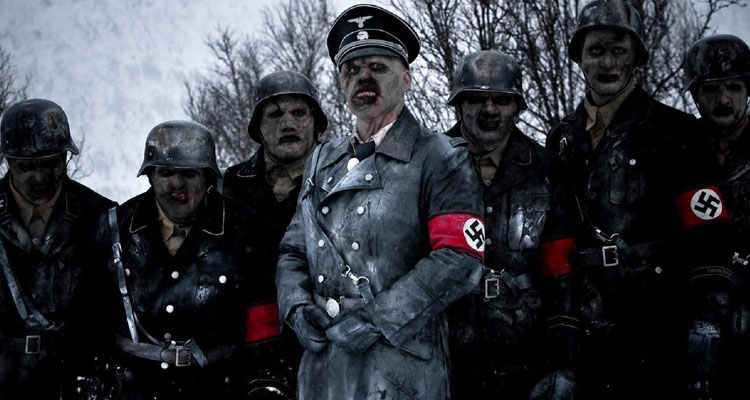 The Plot: German-occupied France, 1944. US soldier Boyce (Jovan Adeppo) parachutes down with his unit, headed up by Ford (Wyatt Russell). Their mission is to take out a fortified German tower which poses a threat to airborne troops on D-Day. Their first encounter is with French villager Chloe (Mathilde Ollivier), who hides them in her house. However, their presence is soon detected by brutal Nazi officer Wafner (Pilou Asbaek). They discover that he’s been hiding a  terrible secret in this tower. Dead villagers are being re-animated to form a new, undead army for the Third Reich and its thousand years…

The Verdict: Horror mash-ups can be intriguing hybrid beasts. Horror and comedy complement each other well, but what of horror and war? As if WWII wasn’t horrific enough, it’s become a breeding ground for a healthy horror sub-genre. From the flawed but visually arresting The Keep to zombie soldiers in the low-budget but inventive Outpost, there’s something about the ultimate bad guys – nasty Nazis. The latest contribution is Overlord, a loopy concoction that has the weight of both Paramount and producer J.J. Abrams behind it. While Billy Ray and Mark L. Smith’s script isn’t exactly original, it does at least go the whole hog and unashamedly announces itself as a full-on gorefest.

The film starts with a jolt as it plunges Boyce into a parachute jump, bullets strafing past him as he descends into an airborne inferno. It’s a thrilling sequence that sets the breakneck tone of what’s to come. Things are off from early on, as he hears inhuman noises from a nearby room in Chloe’s house. This being a horror film of course, the audience is two steps ahead of the characters. Boyce is a resourceful character though and the conscience of the film, ably played by Adeppo. He quickly catches up to the nefarious Nazi experiments and from then on, the film shifts gears and doesn’t let up with its undead onslaught and suitably over-the-top violence.

Australian director Julius Avery made an auspicious debut with his 2014 crime thriller Son Of A Gun. He concentrated on character as much as the dusty Outback action. With Overlord, a nod to the Battle of Normandy codename that launched on D-Day, he’s repeated that same formula but added a war setting and undead soldiers for the Third Reich. It’s a B-movie for sure, but a polished one that has plenty of spills, thrills and chills. Horror characters are often cardboard, set-‘em-up and knock-‘em-down types. Here, Avery invests the soldiers with purpose and a sense of humour, which extends to the bad guys too. Asbaek, already a scene-stealer with his utter rotter in Game Of Thrones, enjoys himself immensely when the make-up effects department take over. It’s a joy to see such commitment from a serious Danish actor.

Overlord doesn’t have any high expectations of itself. There’s nothing revolutionary going on here in the plot mechanics, no attempt to go large scale with its concept. It’s a tight, tense, self-contained film that runs at turbo zombie speed so you won’t notice its faults too much. In that respect, its commitment to being straightforward gory fun is admirable. It certainly does what it says on the tin and then stomps on it. Horror fans should lap it up, along with anyone else looking for post-Hallowe’en thrills.