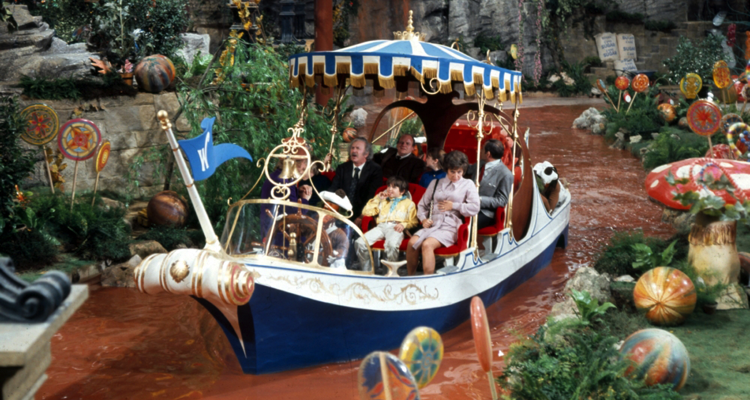 This week, German Oscar nominee for Best Foreign Language Film ‘Toni Erdmann’ is released in Irish cinemas. The film, directed by Maren Ade, tells the story of Winfried Conradi (Peter Simonischek), a man who loves a practical joke; painting his face, putting in false teeth and convincing the postman that he is his own twin brother; a man named Toni Erdmann. When Winifried’s daughter Ines (Sandra Hüller) returns home from Bucharest – where she lives for work – a quietly observed moment makes Winifried realise how little he knows his daughter, so he sets out to try to reconnect with her the only way he knows how; with his alter ego Toni Erdmann.

To celebrate the release of ‘Toni Erdmann’, Movies.ie have taken a look back at some of the most outrageous movie characters of all time. Excluding, by the way, animated characters and superheroes… Otherwise this would just be an article about Batman! Seriously, who takes on the bad guys without any super powers and dresses like a bat!? Not that we don’t love Batman but… *ahem* we digress. Keep reading to find out more about some of the most eccentric, mad and wonderful characters from the movies.

CRUELLA DE VIL – ‘101 Dalmatians’
No, we are not talking about the Cruella in 1961 animated film, or in fact the version of the character played by Victoria Smurfit in ‘Once Upon a Time’, but the version of the character played by Glenn Close in the 1996 live action version of ‘101 Dalmatians’.
De Vil is a character not known for taking anything in moderation, or not settling for what she does not quite want, and Glenn Close makes sure that her version of the character is as over the top as possible, from her chain smoking – how was this allowed in a kids’ film!? – two toned hair and desire steal puppies and to skin over 100 dalmatians for a fur coat. Glenn Close’s performance earned her Golden Globe nomination for Best Performance by an Actress in a Motion Picture – Comedy or Musical (she lost out to Madonna) and was praised by critics, even though the film received less than positive reviews. Close obviously had a great time playing such an over the top character though, and reprised the role as Cruella De Vil for the 2000 sequel ‘102 Dalmatians’.

JACOBIM MUGATU – ‘Zoolander’
Although Will Ferrell reprised his role as Mugatu for last year’s ‘Zoolander 2’, it is really his performance as the larger than life fashion designer with an evil plan in the original film – released in 2001 – that is the standout one.
Mugatu refuses to compromise, and seems to have no idea what is in good or bad taste, and is obsessed with his latte being the right temperature and taking over the fashion world. Mugatu is a satire on every over the top, demanding and bratty designer the world has ever seen, and Ferrell shines in the role that was effectively his cinematic break out role.

LUCY WHITMORE – ’50 First Dates’
OK, so ‘50 First Dates’ is certainly a less than perfect movie – it currently has a score of 44% on Rotten Tomatoes – but Drew Barrymore’s character Lucy Whitmore is certainly a memorable and eccentric character. Lucy suffers from a memory loss condition, where all new memories are lost overnight and she awakens believing it is the day before the car accident that caused the condition in the first place. Of course this is the basis for the character and the entire plot of the movie, and although this is faintly ridiculous, it is actually based on a real life woman – Michelle Philpots, who only has a 24 hour memory after two car crashes.
There is a reverse ‘Groundhog Day’ feeling about ‘50 First Dates’, and although the entire film is standard Adam Sandler Fare, there is something endearing about Barrymore’s performance, as she makes Lucy a fun character and elevates a real life condition.

VIKTOR NAVORSKI – ‘The Terminal’
Played by Tom Hanks, Viktor Navorski is a character based on a real life man who lived in Terminal 1 of Charles de Gaulle International Airport, Paris, France. In the film, Viktor cannot leave New York’s JFK airport since his passport is no longer considered valid because of the outbreak of war in his homeland Krakozhia. Instead of trying to break out of the terminal to find a way to move on Viktor decides to try and make the terminal his home, and befriends the airline and restaurant staff who work in and around the airport. In ‘The Terminal’ Viktor is a sweet and charming man who makes the decision to obey the law and stay in the terminal he is restricted to. Although this is not particularly eccentric behaviour, Viktor’s calmness and diplomacy in the face of adversity, and living off condiments and crackers is certainly unusual.

WILLY WONKA – ‘Willy Wonka and the Chocolate Factory’
Forget Johnny Depp’s new version of the eccentric chocolate factory owner in Tim Burton’s 2005 film ‘Charlie and the Chocolate Factory’, Gene Wilder’s version of the character in 1971’s ‘Willy Wonka and the Chocolate Factory’ remains the definitive version of the character, and a true eccentric.
Willy Wonka is a strange recluse who runs a chocolate factory, which looks like a magical kingdom inside, with a river of chocolate and plenty of eccentric rooms for the children invited to the factory to explore. There have to be easier, and more efficient ways to run a chocolate factory and this is just the beginning. Willy Wonka runs a competition to allow children into his factory for the first time, but he has an ulterior motive; Wonka uses the tour – complete with terrifying boat rides, shoes being turned into candy, flavoured wallpaper, children vanishing in strange and terrifying ways and the occasionally rage-filled outburst – to find a child worthy of being his heir to the factory. There has to be a batter way to do this!

‘Toni Erdman’ is released in Irish cinemas on February 3rd 2017. Watch the trailer below…