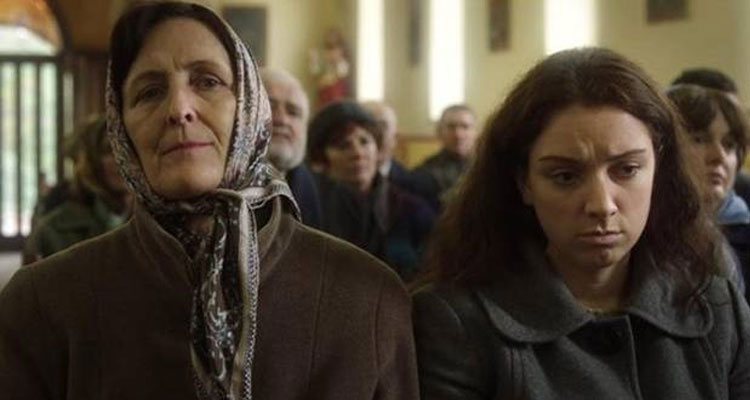 The Plot: Coastal Ireland, 1984. In a small town where everyone knows each other, Sarah (Fionnuala Flaherty) has been carrying on an affair with a married man. She’s pregnant, not that it matters to him. In shame, she gives birth but to a stillborn baby which she hides on her family farm – unknown to her mother Catherine (Fiona Shaw) and aunt Patsy (Ruth McCabe). She comes to the attention of police Detective Callaghan (Alun Armstrong) when a dead baby with multiple stab wounds washes up on the shore nearby. Callaghan thinks the two are connected and applies pressure. Scared out of her wits and in the hope of freeing her family from suspicion, Sarah admits guilt. But the real truth is that she’s a victim of a miscarriage of justice. Instead of the police investigation being on trial, she finds herself in the spotlight…

The Verdict: The infamous Kerry Babies murder case from 1984 provides the inspiration for smalltown legal drama Out Of Innocence. As it’s quick to make out at the start, it’s not a documentary. A documentary would be much about the search for the hard truth, rather than obscuring it with incidental details. Instead, this film tells its version of the story in dramatised form – with decidedly mixed results. It’s a fascinating story for sure. A flawed, too trusting but ultimately decent young woman finds herself at the epicentre of a media storm that really has nothing to do with her or her unfortunate miscarriage. The real miscarriage here is that of justice in condemning her rather than protecting her.

Second-time feature director Danny Hiller, who has mostly worked in television, structures his script as a series of events – a brief introduction to Sarah, the police investigation and court trial. It then wraps with what appears to be a tribunal into the police investigation but is actually a second trial for Sarah – only more intense. All of this is moderately gripping and Hiller keeps the pace moving. The audience is already clued in to the fact that her innocence outweighs a stressed police statement admitting guilt. Hiller doesn’t maintain his focus on Sarah though. He digresses to other characters and adds in incidental details (a bed with a name of a suspected lover of Sarah’s) that don’t progress the story. The Gardai become the unlikely villains of the piece. Their investigation was flawed and not watertight though.

If anything, this story is so strongly emotive and important that it could only be told from the woman’s point-of-view. It’s strange then that Hiller shifts focus constantly so that Sarah becomes lost in a sea of legal troubles and conflicting stories and statements. Flaherty gives a good performance throughout, but the film really needed a lot more of her and her impassioned battle for justice. Hiller’s direction is straightforward and true to his roots has a TV-delivery air about it. Out Of Innocence wouldn’t look out of place as a Sunday night TV drama. It somehow limped out into a handful of cinemas three years after being made. A film inspired by a true-life story like this needs more punch and self-importance to ram its point home. Preferably hard. It’s a remarkable story and the filmmakers clearly meant well, but it’s an unremarkable film.