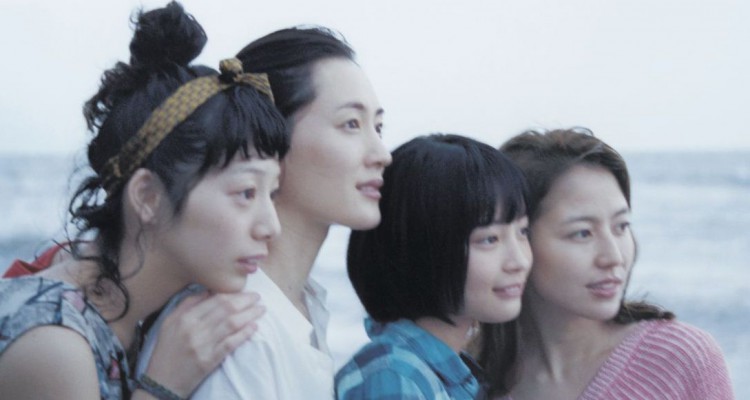 OUR LITTLE SISTER (Japan/TBC/128mins)
Directed by Hirokazu Koreeda. Starring Haruka Ayase, Masami Nagasawa, Kaho, Suzu Hirose, Ryô Kase.
THE PLOT: After their estranged father dies, sisters Sachi (Haruka Ayase), Yoshino (Masami Nagasawa) and Chika (Kaho) meet their younger half sister Suzu (Suzu Hirose). After they discover that Suzu’s mother has also died, the sisters invite their new found sister to live with them, and find their family dynamic changed by her presence.
THE VERDICT: Hirokazu Koreeda’s latest film is a quiet story of family, without the screaming and conflict we have become used to in family dramas to date.
The cast of the film embody the story of the film; the three older actresses, Haruka Ayase, Masami Nagasawa and Kaho use the film as time to examine their relationships with one another and their estranged and now dead parents. The story doesn’t really give the actresses a chance to be anything but kind and gentle with one another, but they do well with what they are given, making the film feel warm and gentle. Suzu Hirose makes her character curious and kind, lighting up the house she shares with her newfound sisters and with many of the supporting cast referring to her as a ‘treasure’.
Hirokazu Koreeda’s screenplay is adapted from Akimi Yoshida’s Manga story Umimachi Diary, and really focuses on the relationships between the characters. Although Suzu got much more time with their father, her sisters never seem to resent her for this, and instead pry her for facts about their father and the man he was. There are times when subplots around the sisters’ work overwhelm the film, and never really seem to add anything to the story, which would have been much more concise if it focused on the lives the sisters live together, rather than apart.
As director, Hirokazu Koreeda has created a warm and engaging film that is not about a family falling apart, but one gently coming together through kindness and generosity. The pacing of the film is sluggish, but this gives the audience more time to spend with the energy between the women, rather than seeking out an all-thrills storyline.
In all, ‘Our Little Sister’ is a sweet and engaging story of a family coming together. There is little happening in terms of pace, instead the film feels like a fly-on-the-wall look at people finding common ground and a way to be together. There are times when a stronger story and faster pacing could move the film along, but as it stands, it is a pleasure to spend time in the company of these sweet and fun women, although the overly sentimentalised music used in the film grates after a while.
RATING: 3/5
Review by Brogen Hayes