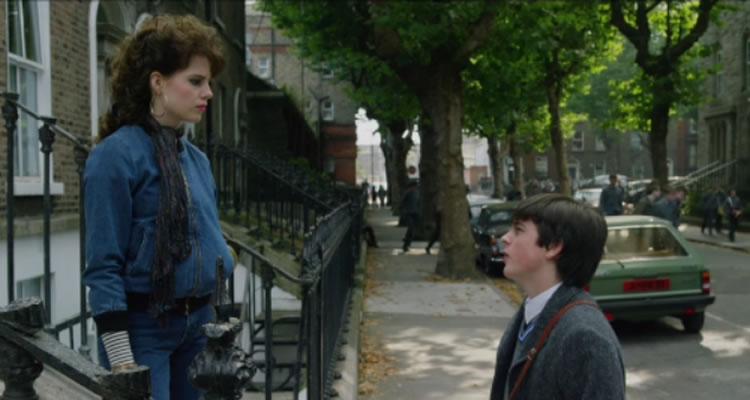 Fresh from a fantastic reception and the Michael Dwyer Discovery Award for Ferdia Walsh-Peelo at the Audi Dublin International Film Festival last month, ‘Sing Street’ is released in Irish cinemas this week. John Carney’s joyful teen movie focuses on Conor (Ferdia Walsh-Peelo) who, in his attempts to impress Reaphina (Lucy Boynton) starts a band with his friends from school, with a little help along the way by his older brother Brendan (Jack Reynor).
‘Sing Street’ is filled with first love and fantastic songs – as we have come to expect from a John Carney film – and so to celebrate, Movies.ie have gathered together some of the best original songs written for movies.

Mrs Robinson – ‘The Graduate’
Sung by Simon & Garfunkel, Mrs Robinson came about after the duo met director Mike Nichols as he was working on ‘The Graduate’. Besotted with the sound of Simon & Garfunkel, Nichols asked the pair to write a song for the film. Although the pair initially presented two songs, Nichols was unimpressed with both, but then they played an early version of a song they were working on, titled “Mrs Roosevelt”, that they had jokingly renamed “Mrs Robinson” after the title character of the film. The rest, as they say, is history.

“Mrs Robinson” was included on the soundtrack for ‘The Graduate’ and although it was not released as a single until three months after the film hit the big screen, it become a huge part of the film’s promotion, and a top 10 hit in the US and the UK.

Exit Music (For a Film) – ROMEO + JULIET
During their 1996 US tour, during which they opened for Alanis Morissette, director Baz Luhrmann approached Radiohead to write a song for his upcoming film. The film was Luhrmann’s modernised version of ‘Romeo + Juliet’ and he gave the band the final 30 minutes of the film to watch as inspiration. Later, Thom Yorke said in an interview with Humo Magazine; “When we saw the scene in which Claire Danes holds the Colt .45 against her head, we started working on the song immediately”. The result was Exit Music (For a Film), which indeed plays over the closing credits of ‘Romeo + Juliet’, but was not included on the movies soundtrack at the band’s request. Luhrmann also used the song “Talk Show Host” by Radiohead in ‘Romeo + Juliet’, which had first appeared as a b-side of ‘Street Spirit (Fade Out)’ in 1995.

If You Want To Sing Out, Sing Out – ‘Harold and Maude’
Cat Stevens’ incredibly popular song was featured at the end of the beloved dark comedy ‘Harold and Maude’, and it was the first time the song was used. Stevens wrote all of the songs for the film, having been recommended for the job by Elton John when John had to leave the project. Although the movie sank out of cinemas with barely a ripple, it went on to become a cult classic, but no official soundtrack to the film was released at the time. “If You Want To Sing Out, Sing Out” first appeared on Stevens’ 1984 album “Footsteps in the Dark: Greatest Hits, Vol. 2”, and the official soundtrack to ‘Harold and Maude’ was finally released in 2007.

Save Me – ‘Magnolia’
Like Stevens did for ‘Harold and Maude’, Aimee Mann wrote all of the songs for the film ‘Magnolia’. Director Paul Thomas Anderson first met Mann several years earlier, and encouraged her to write the music for ‘Magnolia’ after he discovered they both wrote about similar characters. “Save Me” was used to close the film, and was accompanied by a video featuring the cast of the film, which was shot at the end of each day’s filming for ‘Magnolia’. Another of Mann’s songs used for the film – “Wise Up”, which the characters sing in the middle of the film – was originally written for ‘Jerry Maguire’

Happy – ‘Despicable Me 2’
Pharrell Williams actually first wrote “Happy” for CeeLo Green, but after Green’s record label decided against the song, Williams took it back for himself. “Happy” was then used as the lead song for ‘Despicable Me 2’ – Williams had contributed songs to the soundtrack for the first film in the franchise – and the lead single from his second solo album “Girl”. “Happy” was the most successful song of 2014, with 13.9 million sales and streams worldwide, and was nominated for an Oscar. Unsurprisingly, given the success of ‘Frozen’, “Happy” lost out to “Let it Go” at the Oscars, but not before Pharrell got Lupita Nyong’o, Meryl Streep and Amy Adams dancing along with him at the high energy live performance of the song at the ceremony.

Honourable Mentions to… “As the World Falls Down” from ‘Labyrinth, “The Circle of Life” from ‘The Lion King’ and “Lose Yourself” from ‘8 Mile’

‘Sing Street’ is released in Irish cinemas on March 18th 2016. Watch the trailer below…