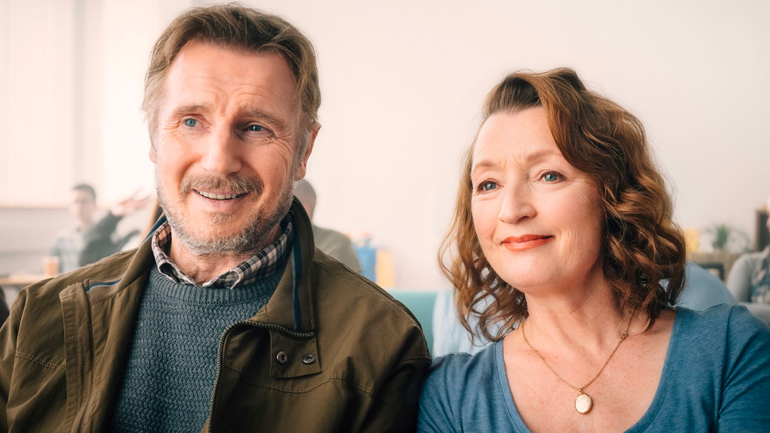 Starring Liam Neeson and Lesley Manville; ‘Ordinary Love’ is a story of love, survival and the epic questions life throws at each and every one of us, it features tour-de-force performances from its two leads. The film’s producer Brian J Falconer was in Dublin this week to promote this beautifully made film, we caught up with him to talk about the making of the film.

Brian, How did you get involved with this project?
This was very different from any project I’ve done previously. I was often there from the start, but for this, I was brought in and they asked: can you take this from development through the production? It was great that we had directors lined up. We had a writer ready to go. A lot was set up before I came on board so my first thing was to work out who is going to finance this.

Did you have any say in getting the cast onboard?
I wish that was me! A first draft of the script was sent to Liam Neeson early on. He signed up straight away. We know that he held it in very high regard. Owen is known to be one of Ireland’s greatest living playwrights. He was a writer in residence at the Lyric Theatre in Belfast. That’s where Liam treaded the boards, he is the patron. I think there was that connection, but the script spoke for itself. The directors, Lisa and Glenn, had an ongoing relationship with Liam where they were attached to a previous project which didn’t get off the ground. The script and the directors were very attractive to Liam. From then on it was about financing the project.

And that was one of your areas?
It was and it was a big deal because this is only my second feature film. My first was through a low budget scheme. The budget that we have for this one was so much bigger so it was a huge learning curve for me. It was the first time I actually experienced closing a project or closing finance. Once we had Liam attached then it was about bringing in different financing. The BFI Northern Ireland Screen were huge supporters of the project. They brought it through development with us. We were really, really keen trying to get them on board for production, but we still needed more money. And so there ended up being a third producer on the project Piers Tempest who really helped me. You really need somebody to teach you if you haven’t closed finance before, you’ve no frame of reference. Before filmmaking, I was assistant general manager of an engineering company and involved in financing. I quit that job to do filmmaking and then couldn’t believe I was thrown back into financing, the thing I didn’t like about my old job. Then I realised I have an understanding of it. I really enjoyed the process of it.

A producer’s skill is to stay calm and get things done. Is that easy for you?
I thought about this recently, I think my sense is that I don’t get anxious about stuff. And so, working closely with Piers I was very aware that a producer has to make decisions, even though other things aren’t in place. So, you’re constantly spinning plates and trying to keep the ship going forward whilst you are doing one thing to enable another thing to happen, even though really you need that other thing to happen. The whole process has been, it’s just a huge learning curve for me. I have enjoyed every second of it. I suppose I work best when I’m under pressure. The second last year in engineering I made five short films. I like pressure! So, to go from that to a big feature like Ordinary Love and the pressure that put on me was something I really enjoyed. Because at the end of the day, you’re there as a problem solver, right. And everybody else, including yourselves, creates the problems. It’s not about who created it. It’s not about the actual problem itself. It’s about getting rid of them.

I don’t know anybody who hasn’t been affected by cancer somewhere along the line. Was it difficult to be attached to something that is so real?
The journey the main character goes through is exactly what my mum went through, literally, and the number of people that I’ve talked to who have had the exact same story as Joan is incredible. I look on social media and people see the trailer and talk about it and how they know the story. I was looking on Twitter. All these ladies who have gone through this exact same thing. And we want people to know that it’s a love story as well. You know, it’s sad, but it’s hilarious as well. And the thing about it is, you know, it’s an ordinary love, it’s ordinary, normal people who are just like your mum and dad are.

As a Northern Irish man were you thrilled to have the chance to work with the Northern Irish acting legend Liam Neeson?
Oh my god, yes. He is such a legend and he is also a lovely guy. It was incredible to work with him. And it was lovely to be part of his return to careful, considered drama. Back to his roots as it were. And Leslie is great, so nice, so normal and such an amazing actor. For me, the biggest thing was the first scene of the two of them together. Just seeing them and knowing it’s real, that the film really is being made and you are part of it. That was incredible.