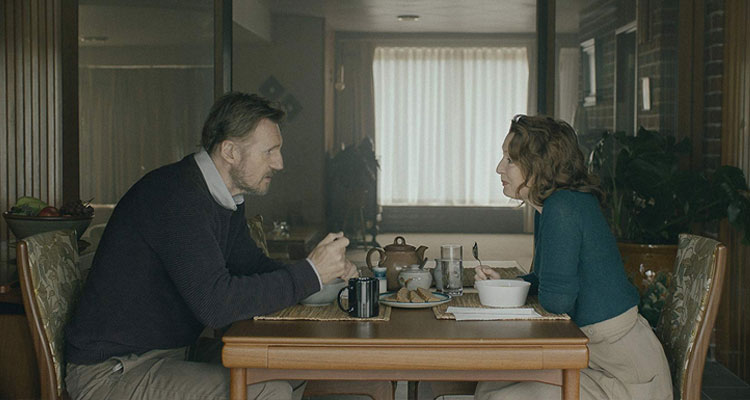 Starring Liam Neeson and Lesley Manville; ‘Ordinary Love’ is a story of love, survival and the epic questions life throws at each and every one of us, it features tour-de-force performances from its two leads. The filmmakers Lisa Barros D’Sa and Glenn Leyburn were in Dublin this week to promote their beautifully made film, we caught up with them to talk about the making of the film.

Congratulations. It’s a beautiful piece of work and so real. Why did you decide to tell this story?
Lisa: I think what we loved about this story was that it was an unusual love story. That’s what excited us about it. It’s a story about a couple who we don’t normally see portrayed on the screen. A couple who have been together for a long time, who have been through beautiful, ordinary, everyday moments and also the big challenges of life together. It’s a middle-aged couple at this stage in life who aren’t going through a power struggle. It’s not the end of a relationship. They’re not bored with each other. They have this vibrant and vital relationship. We just felt that was such an interesting world to explore, it is under-explored on screen and then to see that couple go through a big challenge like this. It felt pretty exciting to get an insight into something so rarely seen.

Did Owen McCafferty, the scriptwriter, come to you with the script or did you go to him for a story?
Glenn: Lisa, myself, and David Holmes who also did the music have a production company together and we’re always trying to develop projects. David knows Owen since he was a child. They grew up together. All three of us wanted to work together for a long time with Owen. David knew the journey that Owen had gone through with his wife Peggy who had cancer several years ago. We thought that this would be good material, something for Owen to look at potentially for his first screenplay. Owen was initially resistant to it, he wasn’t sure about revisiting that time and also for his wife as well. He didn’t know whether he wanted to go back into that world but they talked about it and I think they thought that perhaps that something good would come out of it, that people would see it as something they could connect with and that would be a positive thing. I think when we all looked at it, we realized it’s a love story. And that was really important.

Liam Neeson and Leslie Manville are terrific in this; how did you know they were your Tom and Joan?
Lisa: These are two of the most extraordinary actors working in cinema today. We feel so fortunate, so privileged to be able to cast both of them together for the first time. That’s just such a joy for us. But we needed to cast people who just had it. I think they are both actors you just believe. There’s naturalism, there’s a humour, there’s a great warmth. And they bring to everything that they do. They work in the same way; they share a sense of humour and they both enjoy a good atmosphere on the set. They make it look effortless, but obviously, that’s years of great experience and just brilliance. So, to get to work with actors at that level of accomplishment was a great joy.

They have so much chemistry. Did you have a long rehearsal process?
Glenn: We did have some rehearsal time. We had a couple of days in New York. Liam went to see Leslie on stage and then they met up afterwards for dinner and had a chat then. Then we all got together at Liam’s apartment for a couple of days, just chatting over the script. We had a strong hunch that they would get all of it. The minute we saw them together we knew they had. Thankfully. That first day when they met was instant chemistry and lots of laughter and stories about various things. It’s truly wonderful to see these people together.

Lisa: They are two great actors with enormous respect for each other as well. They were looking forward to the opportunity of working together. The collaboration was really joyful.

In recent years, Liam Neeson has been an unlikely action star. Do you think it was nice for him to get back into a drama, back to his roots?
Lisa: He loved the material and connected with it and felt that the performance he was going to bring to this was quite close to his roots. I think his great dramatic performances still live large in people’s memory. You know, the wonderful performances that we’ve seen over the years in films like Schindler’s List, Michael Collins and so many others. And of course, he’s a great stage actor, too. So, you know, we never had any doubt that this was absolutely within in his wheelhouse, as it is for Leslie, we all know her brilliant work from Mike Leigh films to more recently Phantom Thread. We sent Liam the script very early on having talked before about another project. We just had a sense that this might be something Liam would be interested in. We just heard his voice in the writing. And fortunately, he had those thoughts as well.

There are other films with cancer storylines but they tend towards high drama. This roots itself in every day. Was it important for you to stay clear of those overly dramatic approaches?
Glenn: Absolutely. I think grounding in reality is incredibly important. And I think the thing is, it’s just the lack of sentimentality here. I think those other films sensationalise the subject matter a little bit. And we definitely did not want to do that. We felt that this strengthened the power of it by holding back. And I guess it’s just calibrating everything to be like that, to be quietly observed and not showy. I think in the score as well, sometimes music can be overused and tell the audience what they should be feeling at certain moments. And again, it was about paring back. Still finding the poetry in every day and the emotion, but without asking for it, let it be filled. I think the emotion builds. There’s an accumulation of it as the film goes, it’s the accumulation of all the little moments.

Did you do a lot of medical research, were hospitals keen to support the film?
Lisa: We had an enormous amount of help from some brilliant medical professionals. I have a lot of doctors in my family so we were concerned to get it right. We also had a lot of people, doctors at the Cancer Centre in the City Hospital in Belfast. We have consultants who spent a lot of time looking at everything from script stage to art direction. All of the staff there were incredibly generous to us and on the one day of the year when it wasn’t going to be opened to patients, the 12th of July, we shot all of the medical procedures that Joan has to go through. Many very incredibly generous medical professionals, radiologists, doctors, nurses, came in to help us on that day to guide us through those procedures, just as they were real patients.

Glenn: They were actual people on screen, it wasn’t extras or other actors. They took days off work, it was amazing. I think it was really helpful for Leslie. She said that she wanted to experience it as a person would experience it. So, she didn’t research it heavily. She came into the scenes not necessarily knowing and then having these medical professionals talk her through as we were rolling.

Lisa: We wanted to honour the journey that so many people go through. I mean, everyone’s encountered a version of this story with cancer or some version of these crises that we all come up against in life.

Cancer can hit anybody. Were you scared to take on something like that, to be surrounded by the story of illness?
Lisa: I think you approach something like that with a huge amount of respect, that you do feel like you want to honour that experience as so many people go through it, which is such a tough experience for so many people. I think that was one of the reasons behind making sure we had as much grounding and real sense as possible, bringing people on board and talking to people who have been through that journey as well.

Glenn: I think as well, as much as it is a sad story that it’s also a love story and a life-affirming story. It’s about the connection between those two people and the life that they bring to each other. We focused a lot on that. It’s a snapshot of their life.

Lisa:  It’s about the seasons of a love story and maybe this painful journey has brought them something positive in that they’re able to change and they’re able to open up their eyes a little bit.

I love how the passing of time is marked by a tree which changes with the seasons, was the tree in the script?
Lisa: It started as a lamppost and then the tree idea came up and we had a wonderful designer who spent a lot of time working on the tree and we feel it is really important so I am so glad you noticed it!

You make films together and you are married. That’s a lot of time together!
Glenn: It’s funny, I guess when we’re making films, we think we don’t ever argue. We don’t ever have creative arguments. We argue about how we pack the dishwasher or who’s taking the bins out or something, but never any creative stuff. We love making films and we love collaboration. We love every aspect of that. So, it can be tougher when we’re not making films, to be honest with you. It can be stressful when you’re trying to get a film made. This one was quick, took about four years! But they can be longer and you can build them up and then they can collapse so that can be stressful at times. But the making of films and being on set, that’s amazing. I think we have complementary skills. We both bring a lot to each other’s speciality; Lisa works much more closely with the actors.

ORDINARY LOVE is at Irish cinemas from Friday, December 6th