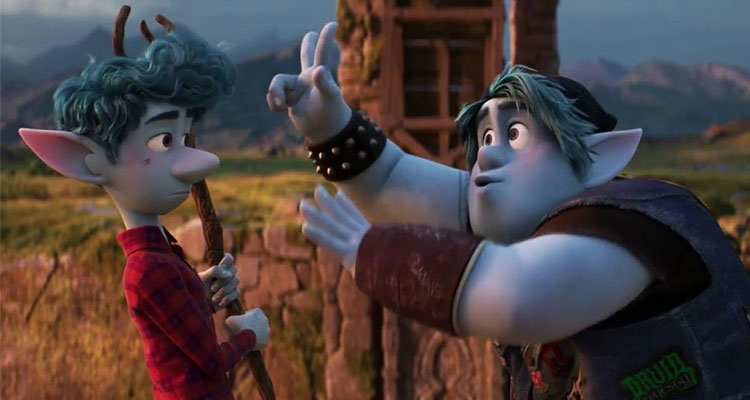 The Plot: Fantasy doesn’t last forever. Progress has to be made, especially now that the magical town of Mushroomton has advanced into the modern era of cars, airplanes and mobile phones. That’s where we find teenage elf Ian (Tom Holland) as he prepares to celebrate his 16th Birthday. Socially awkward, he’s trying to fit in with the cool kids in school. That’s not going to be easy thanks to his older brother Barley (Chris Pratt), who dotes on him and has the ability to do the wrong thing at the right moment. When Ian receives a Birthday gift from his late, dimly-remembered father there’s a chance to bring him back for just one day – but it only partly works. He and Barley hit the road on a quest to make this dream come true…

The Verdict: Once upon a time… Pixar produced one solid gold hit after another, barely pausing to allow audiences to breathe at the ingenuity, imagination and heart on display. But like the magical realism world at the focus of Onward, progress marches on and dollar signs sprouted up like trees. The prime animation house of our times has lost some of its magic. Maybe it’s familiarity with their output. It could also be that we expect so much from Pixar that we’re slightly let down when the quality dips. For better or worse, their latest animated adventure Onward is what you’d call mid-range Pixar – not something anyone would have said a decade ago. It’s on a par with The Good Dinosaur, which means that it’s nowhere close enough to reach the dizzying heights of classic Pixar. However, its heart is definitely in the right place.

The script by Jason Headley, Keith Bunin and director Dan Scanlon has an amusing, Shrek-like scenario at its core. That of a magical world which is not of ye olde times but closer to our own. Progress may have happened but magic is still around for those who believe in it and can tap into it. Like a lot of Pixar films, the story is focused on familial bonds that tie our characters together through thick and thin. At its core, it’s a story of elfin brotherly love between the optimistic Ian and his enthusiastic if somewhat dorky older brother Barley. There’s a Frodo and Sam parallel there, as they go on a quest to restore the memory of their father for a short time. That in itself is admirable, as it becomes an amiable buddy road movie as they encounter all manner of other creatures. Most amusingly, a gang of biker fairies who very nearly steal the film.

Less admirable is just how shaky the script is for the first half of the film. Like Barley’s rickety but loveable old van, it sputters from one scene to another as it attempts to establish our characters and their quest to fill out the missing half of their father after the spell doesn’t quite work. The world-building is somewhat clunky as well, quickly establishing it but not allowing much time to bask in its occasional ridiculousness (unicorns fighting over rubbish bins, for example). Getting through the first half is a bit of a drag, but a leap of faith in Pixar is required. It gets better. The film finally finds its footing when the quest takes on a more engaging phase – literally, in the case of Ian taking a walk across an invisible bridge (a nod from the film-loving animators to Indiana Jones And The Last Crusade).

That last act is where Onward earns its third star, as it deepens the story and the awkward bond between the brothers in unexpected ways. Now we’re into proper Pixar territory where the emphasis is more on the story than anything else. It leaves you with a warm, fuzzy feeling that makes up for those earlier missteps. Whatever its faults, mid-range Pixar like Onward is marginally better than most animated family films. The magic is still there.