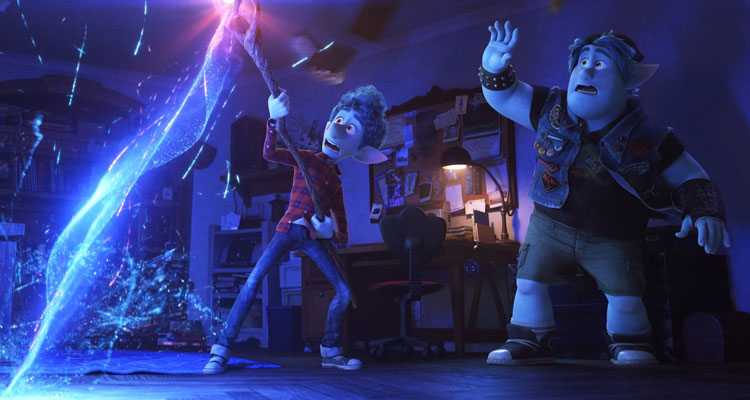 ONWARD – Behind the scenes interview with Pixar

Pixar’s new Disney + release ‘Onward’ is a sweet blend of familiar fantasy tropes through a modern lens. It tells the story of two elven brothers Ian and Barley Lightfoot who are gifted a magic spell with which to see their dead dad, who Ian has never met, for a day.

With ONWARD launching on Disney + this weekend we thought we’d revisit our interview with Pixar director Dan Scanlon & producer Kori Rae to discuss all things fantasy, family and Pixar.

What inspired the central conceits, one being the story of bringing the dad back and then the other being the modern fantasy setting?
Dan:   The parents story came from my life. Like the boys I lost my father really young and my brother and I don’t remember him – we grew up wondering who he was and how we were like him and trying to make that connection and looking for that sort of blueprint toward what kind of adult should I be? And so that led to the idea of ‘what if we could meet him, what what would we say, what would we do?’ especially at that age, when we were 16. And then we thought, Well, how would you do that in a movie? How would you meet someone for a day and we thought maybe there’s like a machine… And they’re scientists, brothers who make this but it just felt kind of cold and not as much fun as, and not as romanticised as, the idea of magic – bringing him back with magic – and we wanted it to be a fun, magical world. So that led to a fantasy world, which then made us think we don’t want to set it years ago and have a bunch of guys in robes talking about their father, and so that sort of forced the modern fantasy in there. And I think it became this nice, unique blend that led to humour for one thing and helped turn this into this kind of rich, unique movie.

It must have been an emotional experience making it even as an adult, how did you keep yourself from from crying all the way through?
Dan:
I think because we were working together as a group, we had so many artists and writers and all sorts of folks contributing their own stories to the movie and helping, you know, like people would tell their own stories and we go off of that. I think it’s more emotional now that the movie is out. And my brother’s seen it and my mom has seen it and now I’m a wreck and a raw nerve and everything because it’s out in the world and suddenly belongs to the world in all the best ways and all the scary ways. So it’s worth doing something that is personal that you believe in I think – it’s really worth it because when people tell me, I lost my parents and my sister who meant the world to me, whatever their story, it’s wonderful.

Every time I watch Pixar movies I feel like a kid again. I feel that they’re for everyone, because everyone can always relate to something. What do you love about Pixar?
Kori: I think animation kind of helps and allows you to tell highly emotional stories, because you kind of have your guard down. You think look at this crazy world. Look at look at this rat cooking in a kitchen! Look at this man whose house is flying held up by balloons so you’re already being drawn in and then the emotion comes through. And I think it allows us to tell highly emotional stories a little easier to a larger audience. So that’s what I love about it. I love telling those honest emotional stories.

Dan:  Yeah, I agree with that. And then what I love about working at Pixar is they have a lot of trust and they give you time. I think those are really important things to allow filmmakers to take risks. And they there’s a lot of encouragement to do weird crazy things like have a half of a dad in your movie. They tend to lean in more when something seems scary or not so likely to go over well, you know what I mean? Like they don’t get weirded out about the weird thing. And they generally seem to like to take the road less travelled and and if it goes wrong, they’re there to pick you up and get you back on the road

The aesthetic from this film is very specific. How did you choose the cartooniness style for the characters?
Dan:  I wanted it to still be something that was fun to animate, something that the animators would have fun animating because I think that’s probably going to be a little more cartoony and the audience is going to enjoy watching it more rather than something that’s super realistic. We didn’t go as broad as we originally thought, because we wanted the modern elements of the characters to read, if that makes sense. If you stylize the centaur too much, you start to lose the extra humour of the fact that it’s wearing a policeman’s uniform. But I still wanted the movie to be fun and funny. I also wanted to balance the fact that this was going to be an emotional thing and that it was going to be sincere at times, but I love a movie that makes me laugh out loud and has that emotion and so we wanted to make sure the characters were able to do really broad comedy if needed, and when needed.

Would you consider making a live action version of this or any of your other films or would you be interested in moving over to live action?
Dan:   We’ve never thought about live action versions of any of the movies. We started fully in animation and that’s the medium we love so I think I will stick with that.

The LGBT character in the film is getting a lot of attention, can you tell us about that?
Dan:  We went to great lengths on this movie to have it be a realistic movie that feels real and that’s our real world and we want it to be diverse and filled with all the people that are in our world. So you know… It seems critical.

Your first movie was a sequel (Monsters University) and Onward is original. What gets your heart going more?
Dan: They’re both such unique challenges. I’ve worked on a lot of sequels in my career. And I really enjoy it. I mean, it’s tough. You have to take these characters that people love and give them a new adventure and a new spin. And when I see a great sequel, I’m super impressed by it. And it’s really hard to do. But an original is an amazing experience.

Kori: Yeah each is a different kind of challenge. With an original, it’s like you’re creating everything from nothing. And so whereas you have some limits with a sequel, when it’s original it’s limitless. It’s kind of an equal challenge, one’s not easier than the other. It’s just kind of different. But it was really fun to create a world, create a new town and create a an original story that was based on a truth and an honest story. So yeah,

This film stars two of Marvel’s best and brightest, Tom Holland and Chris Pratt. How did that come about?
Kori: It just so happened that Tom and Chris really embodied these two characters. We found Tom first just because we needed to cast the main character and Tom just so embodied him in that he could do awkward and and shy and not confident but in a really charming way. We’re just so lucky to have them both

Were you a fantasy geek?
Dan: No, I was a different kinds of Geek but not fantasy. For some reason, I didn’t play a lot of fantasy, but we have a bunch of people on the team who super know their stuff.

What is next for Pixar? You have said you’re not going to do sequels?
Dan : Just for the next little while, yeah, we have a bunch of originals coming. So it just so happens that the stories that are in the pipeline are kind of all original, which is fantastic. It’ll just keep opening up different worlds to explore. We can make the films look really, really great and what’s exciting is, it seems like it’s less about making things look more and more real. Now we have to continue to find fun ways to stylize the films. It’s not about making it real so much as making it unique now, which I think is really cool. And there’s a lot of new voices coming, a lot of new directors coming down the road. So I think we’re gonna see a lot of varied things, a lot of different things. I’m excited.And like I was saying with the pants from the movie, you know, a dad who’s half pants, that’s crazy. I love that as these ideas are pitched to us, there’s a lot of them that make me think ‘Okaaaay… so we’re doing that. Okay.’ (Laughter)

ONWARD is available to watch now on Disney +