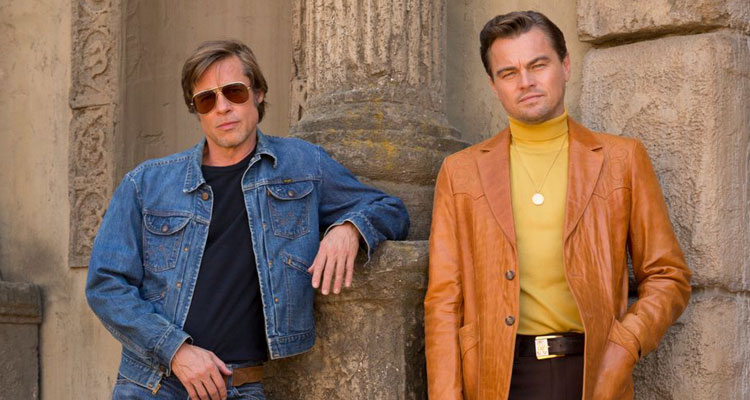 Once Upon A Time… In Hollywood

The Plot: Hollywood, 1969. Actor Rick (Leonardo DiCaprio) had his glory days in action pictures.  Now he’s slumming it in cowboy TV shows and bit parts in other shows. His stuntman Cliff (Brad Pitt) is chilled-out and acts as a counterpoint to Rick’s occasional flaring temper. He’s more than a stuntman though – he’s Rick’s best buddy, driver, gopher, handyman and just about everything else. Rick lives in the Hollywood Hills next door to budding starlet Sharon Tate (Margot Robbie), who is married to acclaimed director Roman Polanski. As Rick contemplates his new-found status as a has-been, he receives an offer to do a number of pictures in Italy. Meanwhile, Cliff has a run-in with Charles Manson’s cult and their twisted agenda. These various threads will collide and become entangled…

The Verdict: Is Quentin Tarantino starting to mellow in his old age? That could be the case with his 9th film, Once Upon A Time… In Hollywood. That ever-increasing number is there for a reason. Like Luc Besson, Tarantino only wants to make 10 films and leave it at that (even less than Stanley Kubrick). While Besson has now moved well past 10, Tarantino seems more committed to rounding his cinematic career off in the near future. That would be a shame, as his latest film shows a growing maturity in, perhaps, the most devoted film-loving director of our age. It may be a reaction to the over-the-top violence of his whodunit-style western The Hateful Eight… or it could be that Tarantino is more interested in evoking a significant time period and the characters within in it.

1969 is a significant period in Hollywood history and Tarantino has chosen it for precisely that reason. The Golden Age of the studio system came to an end; the impact of the Vietnam War was reflected in the bloody onscreen violence of that era in films like The Wild Bunch; and new, exciting voices in American cinema came to the fore like Francis Ford Coppola, Steven Spielberg and Brian De Palma. It was also the year that Charles Manson and his cult committed an appalling act of murderous violence. If you know your Hollywood history, then think again. Tarantino has mixed fact and fiction here to come up with his own take on that time period. There are a number of real-life characters here, such as Sharon Tate – so memorably luminous in Roman Polanski’s comedy-horror The Fearless Vampire Killers. Then there are Tarantino’s own fictional creations, primarily the double act of Rick and Cliff – two cowboys who have lost their way on the trail, but are still hanging in there.

The contrast between the egotistical Rick and the more laid-back Cliff is an intriguing one. Both DiCaprio and Pitt fully invest in their characters and their foibles, while also showing a co-dependency that cannot last forever. Tarantino spends the first two acts hanging out with these characters, on set and in bars, restaurants, streets and at Rick’s home. Tarantino spends a day with Rick, Cliff and Sharon, contrasting their very different lifestyles and levels of success in Tinseltown. A key scene here involves Tate going to watch herself in The Wrecking Crew and enjoying the audience reaction (Tarantino uses the original footage, rather than insert Robbie). While it’s gently amusing to watch Rick being upstaged by an 8-year-old girl on set, there is a lack of momentum in moving the plot forward at this point. Charles Manson is little more than an extra, but there is an air of foreboding evil around his cult, foreshadowing what is to come.

The plot is loosely structured until the third act, when a significant time jump occurs, the plot is more focused and moves into typical Tarantino territory. It’s a long wait to get to this point, but it’s certainly worth it and Tarantino shows an imaginative air for sudden, outlandish violence. The restraint on Tarantino’s part up to this point is admirable, not using his trademark violence just for the sake of it. What’s less admirable is his somewhat dubious mixing of fact and fiction. The film doesn’t claim to be based on a true story, but there are real-life elements here that seem glossed over to pursue the agenda of his fictional satellite characters and a revisionist take on this period in history. There’s a melancholic quality to the film, which extends to Tarantino’s affection for Tate. It’s as much as a tribute to her as it is to the Hollywood of a bygone era and cinema in general. It’s an imaginative, thoughtful piece of filmmaking that while not perfect still demands to be seen. Let’s hope that Tarantino doesn’t hang up his spurs just yet.