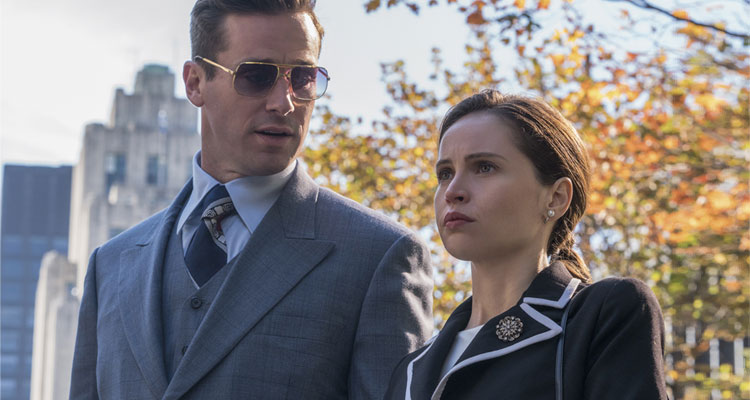 On The Basis Of Sex

In short: Food for thought

The Plot: It’s the 1950s and Ruth Bader Ginsburg (Felicity Jones) is one of the few women attending Harvard Law School. Her forward-thinking husband Martin (Armie Hammer) is also attending and is supportive of her decision to pursue a career in the male-dominated legal system. Ruth refuses to believe that women should only be designated a traditional domestic role. They’re every bit as capable as men at work and should not be barred on the basis of their gender. This goes against the very grain of the US Constitution, which ensures equality. In the more liberal 1970s, she sets out to tackle those deeply entrenched role-based laws with the help of American Civil Liberties Union boss Mel (Justin Theroux). That’s when she comes across an unusual case involving caregiver Charlie (Chris Mulkey), who is being discriminated against because he’s a man…

The Verdict: While she may not be well-known on this side of the pond, Ruth Bader Ginsburg is a household name in the US. A crusading lawyer and subsequent associate justice of the US Supreme Court, the 85-year-old is known for her sense of humour, balanced judgment and ability to weather the storms of any controversies. Think Judge Judy – only older and less brusque with plaintiffs. Her life story and how she became labelled ‘The Notorious RBG’ was told in recent documentary RBG. Following hot on its heels is On The Basis Of Sex, a dramatised glimpse into her early career and attempts to overturn Government-enacted gender-based discrimination.

Mimi Leder, returning to directing features for the first time in a decade, wisely chose to focus on two particular periods of Ginsburg’s life, rather than a wide-ranging biopic. Leder sets the tone early on in the patriarchal 1950s, where Ginsburg is met with bare-faced sexism from the Dean of Harvard Law School (Sam Waterston). She hits back with a knowing sense of humour though, pointing out that she’s not going to idly and obediently sit in her pre-determined box. The story then jumps to the early 1970s, when change is very much in the air. Seizing this opportunity, she takes a somewhat ordinary tax case which could have major implications for the way The Law regards the separate treatment of men and women.

The Law is truly an ass if it hasn’t got the ability to change with the times and respect the fundamental tenets of the highest law in the land – the Constitution. It’s the stuff of inspirational dramas and there’s plenty of inspiration on display here thanks to Jones’ under-stated performance (which has sadly been overlooked this Awards Season). When she takes the stand to deliver her rallying call before three judges, it’s hard not to be stirred by both Jones’ unshowy performance and the simple effectiveness of Ginsburg’s powerful words. This isn’t a dry courtroom drama though. It’s much more about the idea of necessary change and how the legal system can lead the way in changing those hearts and minds one step at a time. Men and women are different, but that doesn’t mean that The Law should treat them differently.

The flaw in On The Basis Of Sex’s case to the court of film criticism is that it doesn’t really emphasise just how important and iconic Ginsburg is. Some brief onscreen notes at the end attempt to fill out the picture, but don’t do her justice. There’s a gap of knowledge between the story we’ve seen and the woman she is now, made more pronounced by the transition when the real Ginsburg walks into the frame. It’s not a fatal flaw though and the film pulls through as a stirring piece of informative entertainment with relevance to today (including the lack female representation in the film industry). If it’s food for thought, then it’s a starter rather than a main course. It’s a tasty starter though, about the origins of an iconic American legal eagle.