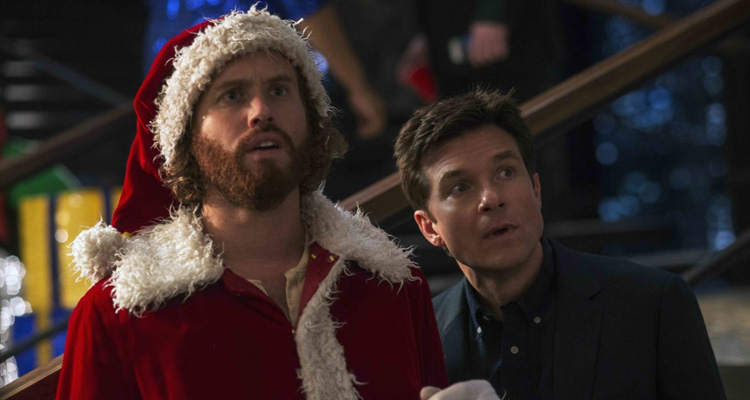 Movie Review
Office Christmas Party – Review (USA, 16, 105mins)
Directed by Josh Gordon, Will Speck. Starring Jason Bateman, Jennifer Aniston, Olivia Munn, T.J. Miller, Kate McKinnon, Courtney B. Vance.
The Plot: It is Christmas in Chicago and IT company Zenotek is gearing up for its Christmas party. Josh (Jason Bateman) and Clay (T.J. Miller) are at the helm of the company, but it is steering towards troubled waters. Clay’s bossy older sister and company CEO Carol (Jennifer Aniston) arrives in town with the threat of shutting down the branch and tossing everyone out into the snow. All discretionary expenditure has been cancelled, including the party.
That does not stop Clay from going ahead with the party, funded from his own money. With the help of tech-head Tracey (Olivia Munn) and prim and proper Mary (Kate McKinnon), Josh and Clay set out to snag potential client Walter (Courtney B. Vance) whose investment could save the branch. That is, if the party to end all office Christmas parties does not sink the branch first…
The Verdict: After the sadly disappointing Bad Santa 2, it is a relief to find a Christmas comedy that sets out to have fun and lives up to its rib-tickling trailer. Office Christmas Party: it is all there in the title. Although it was inspired by a Saturday Night Live sketch, it is surprising that nobody thought of this simple postage-stamp concept as a film earlier. Of course, things are somewhat heightened here for cinematic effect. This reviewer’s office Christmas party is a relatively sedate affair compared to the crazy antics involved in this film. This is the office Christmas party you always wanted but never got from senior management… and then some.
With two directors and six writers credited to the film, it is a small Christmas miracle that the film manages to mostly succeed and avoid being a load of humbug. That is partly down to co-directors Josh Gordon and Will Speck. In their third feature together, they reign in what must have been a chaotic script assembly to focus on the characters and situations, while ensuring that nobody is left out in the snow. The main characters are all well-defined and likeable office sorts, played by a motley but reliable bunch of character actors and comedians. Bateman and Miller could do these roles in their sleep, but they remain engaging throughout. Aniston plays another variation on her merciless boss from hell, but gets some good chuckles. Even the smaller bit-part players like Jillian Bell, Rob Corddry and Vanessa Bayer shine.
Sure, there are some flaws like obvious early signposting (a car jumping over a bridge) and an unnecessary third act chase across town involving Bell’s pimp. The film is more steady on its feet when in the riotous office party, rather than out of it. If there is one festive-themed film to see this month, then make an appointment with Office Christmas Party. Yule like it.
Rating: 3.5/5
Review by Gareth O’Connor.
A Christmas cracker
3.5
A Christmas Cracker