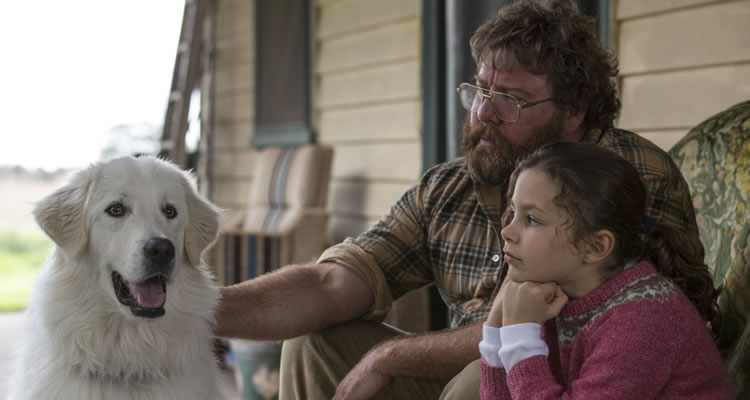 Oddball and the Penguins

ODDBALL AND THE PENGUINS (Australia/G/95mins)
Directed by Stuart McDonald. Starring Alan Tudyk, Sarah Snook, Coco Jack Gillies, Deborah Mailman, Shane Jacobson.
THE PLOT: Middle Island off the coast of Warrnambool, Australia, has been home to fairy penguins for many years, but since foxes have found their way to the island, the penguin population has been severely diminished. With only 20 penguins left, and the conservation status of the island under threat, chicken farmer Swampy (Shane Jacobson) and his granddaughter Olivia (Coco Jack Gillies) decide to train Swampy’s rather odd sheepdog Oddball to defend the penguins from the predatory foxes.
THE VERDICT: ‘Oddball and the Penguins’ is based on a true story, and is just about odd enough to be charming and endearing. The trouble is that this sweet little film feels a little cheap and a little forced in places.
The central cast is made up of Shane Jacobson as Swampy, Coco Jack Gillies as Olivia, Sarah Snook as Olivia’s mother Emily, and Alan Tudyk as Bradley, Emily’s new boyfriend who is determined to bring some tourism back to Warrnambool. Each of the cast bring a level of earnestness to the film that is only ever really seen in cinematic outings aimed at the youngest ones in the audience. There is nothing inherently wrong with this, but it does undermine some of the drama in the film. There are times when the film feels a little like a pantomime, with many of the characters drawn cartoonishly and over the top that will begin to grate on the adults and older children in the audience.
Peter Ivan’s screenplay is based on the true story of Oddball the dog and his quest to protect penguins from foxes. In this way, the story is strange, offbeat and endearing. The central characters are written well enough, with some slapstick thrown in for Alan Tudyk, who is always good at such comedy. The trouble with the screenplay arises with the lack of focus; the film tries to split its time between the madcap story and the serious drama, leaving it feeling uneven.
Stuart McDonald’s direction makes the film charming and warm but slightly over the top, with a feeling that the children in the audience are slightly being spoken down to, which is never a good feeling for a kids’ film. That said, the film has a warm heart and although some of the effects look a little cheap and the island scenes were obviously filmed on a soundstage, there is a charm to the film that endures through the missteps the film takes.
In all, ‘Oddball and the Penguins’ is a charming film with a warm heart that makes some mistakes with tone and focus. That said, the youngest in the audience will enjoy the animal charm although adults and older kids will perhaps find less comedy in this earnest and heartfelt film.
RATING: 3/5
Review by Brogen Hayes