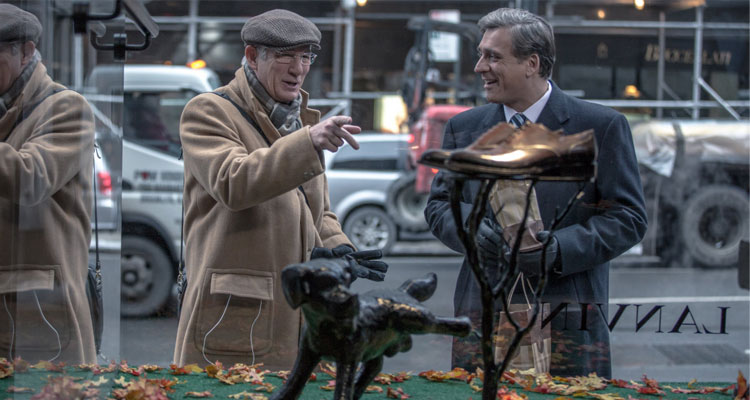 Movie Review
NORMAN (Israel / USA/ 15A/118 mins)
Directed by Joseph Cedar. Starring Richard Gere, Lior Ashkenazi, Michael Sheen, Charlotte Gainsbourg, Dan Stevens, Steve Buscemi.
THE PLOT: Norman (Richard Gere) is what you call a New York fixer. A small-time Jewish businessman whose office seems to be the Manhattan streets, he sets up businessmen with influential connections to further their interests. This is where he meets Israeli Deputy Minister Micha (Lior Ashkenazi), whom he uses his charms on. Norman sees real political potential in this man, so he buys him an expensive pair of shoes and arranges for him to meet New York’s movers and shakers like Philip (Michael Sheen) and Bill (Dan Stevens). Several years and many small favours later, Micha is now the Prime Minister of Israel. Their long-standing friendship is about to be tested, as the political wolves come closing in on Micha…
THE VERDICT: Although it’s mainly known as ‘Norman’ for short, this film comes with an onscreen title of ‘Norman: The Moderate Rise And Tragic Fall Of A New York Fixer’. That gives you some idea as to what to expect from this beautifully written and very well-acted singular character portrait. Norman isn’t just a character. He’s a man of character, generously offering his help to connect people in ways that might benefit them, though not necessarily him.
Yet, we only get to know as much about Norman as the other characters do, which is an interesting perspective. Most films clue the audience in, so they’re one step ahead of the other characters. Writer-director Joseph Cedar is more interested in keeping Norman an enigma, which works in the film’s favour. Divided into four acts, Cedar’s script builds up the friendship between Norman and Micha before it eventually has to come down. This is done in subtle ways which are brutally honest about the nature of power and how it can change and test people over time.
‘Norman’ is in a sense a companion piece to ‘Time Out Of Mind’, Gere’s previous collaboration with Oren Moverman, who produces here. It’s fascinating to watch the former Hollywood leading man take a late career turn towards independent cinema. He could easily play father roles or go down the predictable route followed by Robert De Niro. Instead, Gere is responding more to intelligent, well-written scripts which are more about finding the character on the page than in the paycheque. He’s excellent here, conveying the likeable irritability of Norman. It’s only getting a small release amid the clash and bang of summer blockbusters, but ‘Norman’ is a real find. Go see.
RATING: 4 / 5
Review by Gareth O’Connor
Review by Gareth O'Connor
4
Top Gere