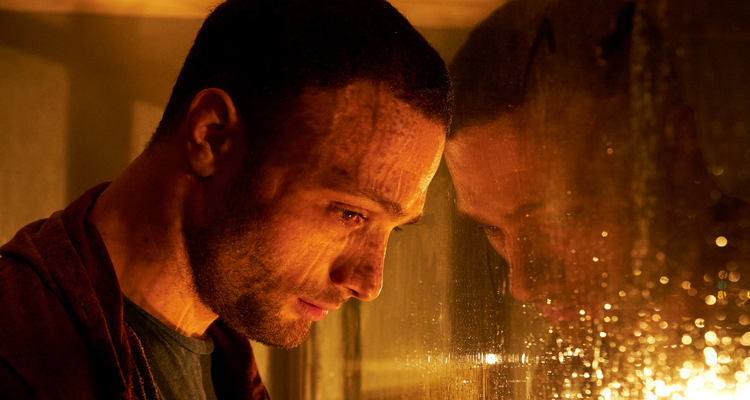 Painter / decorator Pete (Cosmo Jarvis) hasn’t had the most blessed of lives. He bottles up his emotions and finds it difficult to talk about the pain that is so clearly burning away inside him. He strikes up a friendship with teenager Laurie (Lauren Coe), an aspiring track runner who despite her young years is more in tune with life than he is. Both of them bond over a cynical sense of humour and their no-nonsense approach to life. Meeting up for late night chats, the pair grow closer. Maybe a bit too close for Pete’s liking, as he has a secret that he’s unable to vocalise…

The Verdict: There is something about feature debuts that speaks volumes about latent talent just itching to develop into something grander over time. British director Claire Oakley admirably achieved this claim to fame recently with her startling debut Make Up, which focused on a teenage girl’s awakening. There’s something similar in the water in Italian director Nathalie Bianchieri’s British-set smalltown drama Nocturnal. Set in a grim, windswept Yorkshire coastal town where not much happens during winter, it focuses on the relationship between thirtysomething Pete and teenager Laurie – two characters at different points in their lives. Life seems to have passed Pete by, whereas Laurie has it all in front of her. And yet the two strike up an amiable friendship despite their age difference and life circumstances.

The film isn’t quite going where you expect it though, something which becomes apparent as the story progresses and the usually silent Pete starts to open up more. The careful script, by Bianchieri and Olivia Waring, is a well-balanced two-hander between two flawed characters who resemble something closer to real life than movie life characters (i.e. they’re more identifiable). Any sense of insincerity or pandering to the audience has been drained out of the script. This streamlines the narrative into something both raw and tender in its depiction of two lonely characters who need each other more than they think. There is an obsession element running under the surface of the story, which occasionally bubbles up but is delicately handled by Bianchieri and her two gifted lead actors.

This could be Cosmo Jarvis’ breakout year. Having impressed hugely in Calm With Horses, he portrays a similarly tortured soul wrestling with his conscience about the right course of action to take. On set, he pretended to be 17 again and there’s a playful quality to his performance in his rapport with Irish co-star Lauren Coe. In portraying Pete, he has the pained expression of a man who has lived a life of deep regret, unable to mend the past until the opportunity finally presents itself. Even then, he misjudges the situation and how to handle it. You feel for him, trying to make things right again. It’s a fascinating performance, a study in Marlon Brando-style Method Acting where actions speak louder than words. Coe responds to this well, delivering a heart-breaking performance that has no false notes and gets to the core of the character.

Bianchieri has said that there’s a documentary-style element to the story, which is reflected in the unshowy direction and modest delivery. This is essentially a film about characters finding each other. This is when the audience forgets the artifice of filmmaking and is drawn deeper into the story. As such, it fits the mold of a first film where the story is king (or queen). It may be a simple film on the surface, but Nocturnal has some stark but honest truths to reveal about handling responsibility. There is a light in the darkness here. It has all the hallmarks of a promising future for its director, making it worth seeking out.

In short: An assured debut