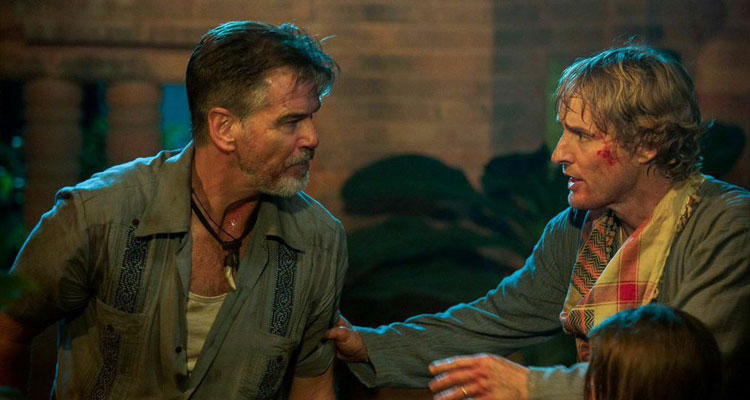 NO ESCAPE (USA/15A/103mins)
Directed by John Erick Dowdle. Starring Lake Bell, Owen Wilson, Pierce Brosnan, Sahajak Boonthanakit, Claire Geare, Sterling Jerins
THE PLOT: Jack Dwyer (Owen Wilson) and his family move to an unnamed Asian country to start a new life, 17 hours before a bloody coup over the country’s water facilities breaks out. Jack, his wife Annie (Lake Bell) and their two children must fight their way through the city to safety, while knowing that if caught, they will be executed.
THE VERDICT: is a strange little movie in some ways; it is Owen Wilson’s first dramatic role since BEHIND ENEMY LINES – released in Ireland in 2002 – and although there are times when slo-mo is overused, the film is a decent and competent thriller.
Owen Wilson and Lake Bell really don’t have a huge amount to do here, except run away and look scared, but the scenes with their two young daughters Lucy (Sterling Jerins) and Beeze (Claire Geare) are rather delightful, giving a feel of natural and gentle camaraderie, and family love. Bell in particular is great with the young actresses, and her protective instinct as a mother, and heartbreak over having to tell her daughter to wet herself as they hide feel natural and real. Pierce Brosnan turns up as a mysterious man whose seeming drunkenness is a cover for something larger, and he makes the character funny, endearing and just a little bit badass. Sahajak Boonthanakit rounds out the cast as a taxi driver who goes by the name of Kenny Rogers.
The story, written for the screen by John Erick Dowdle and Drew Dowdle – who previously brought us horror movies QUARANTINE and AS ABOVE, SO BELOW – seems to follow the formula of an over the top 80s action movie for the first half, but then settles into the story being told and dials down the action movie tropes. The film ramps up the tension and, although there are perhaps one too many fight scenes, the action serves to develop the characters a little further, rather than being just action for action’s sake. We never learn exactly which Asian country the film is set in – although the country shares a border with Vietnam so a logical guess could be China, Laos, or Cambodia – but this doesn’t matter after the first moments of the film, and since most of the Asian players here are portrayed as bloodthirsty and violent, perhaps its a good job.
As director John Erick Dowdle seems a little uncomfortable with taking on the action mantle at first, and plays up the emotion between the family, as well as the aforementioned slow-mo, but becomes more comfortable as the film goes on. The violence is surprisingly bloody and visceral, and the tension mounts throughout the film – dissipating slightly as the film lumbers to a drawn out and seemingly pointed close.
In all, NO ESCAPE is a surprisingly engaging thriller. It’s refreshing to see Bell and Wilson in non-comedic roles, an their chemistry together, as well as with the young actresses who play their daughters – is sweet and warm. The film starts off like a conventional action thriller, before becoming tense and dark, bloody and highly violent scenes, but runs out of steam in the final act.
RATING: 3/5
Review by Brogen Hayes