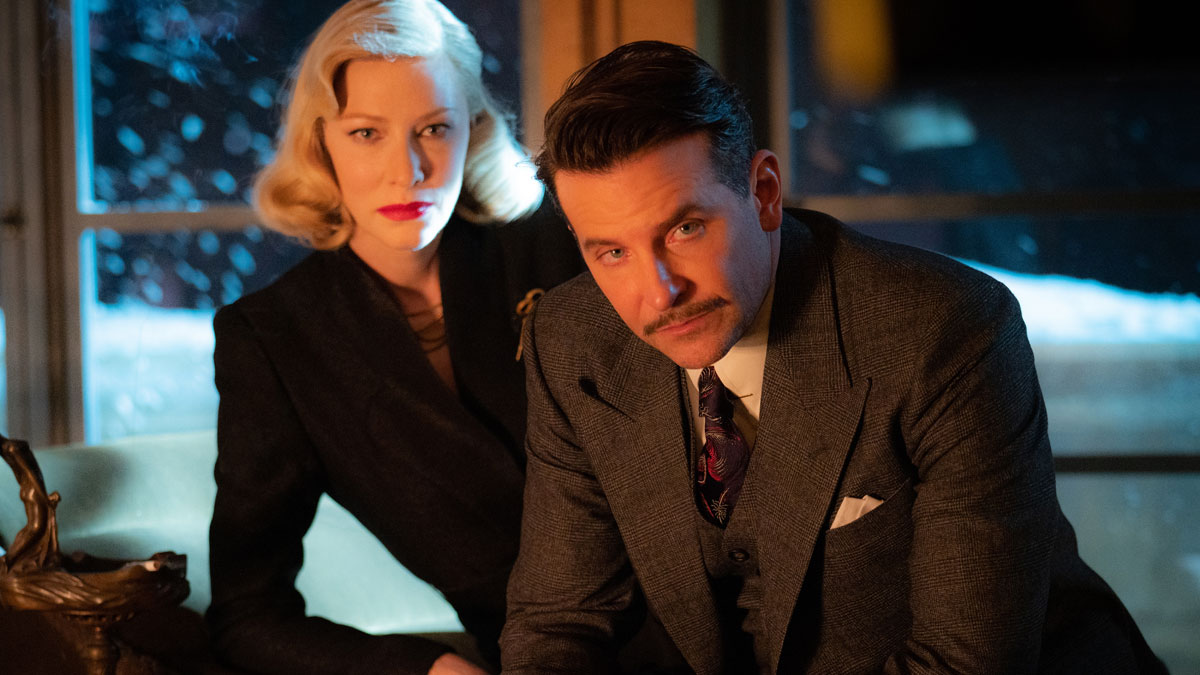 The Plot: Autumn, 1939. Down-on-his-luck drifter Stanton (Bradley Cooper) finds himself drawn to a local carnival run by barker Clem (Willem Dafoe). Looking for work, he charms his way into the lives of the crew including clairvoyant Zeena (Toni Collette) and the electric Molly (Rooney Mara). He soon learns the tricks of the trade, but he’s also looking for an angle to exploit. It’s not long before he heads to New York to charm high society with his foresight. This is where he encounters psychologist Lilith (Cate Blanchett), a poised woman who also has her own agenda…

The Verdict: Roll up. Roll up. Come and hear the amazing story of a man who got so low because he reached too high. It has it all: ambition; magic; dames; deception; a corpse or two. Most enticing of all, it comes from the fantastical mind of one Guillermo del Toro. A director with a deep love for cinema and its history, as evidenced by his past contributions like the Oscar-winning The Shape Of Water. He’s diving deep into classic film noir with Nightmare Alley, a metaphorical title in which its lead character Stanton finds himself following his questionable career and life choices. Adapted by del Toro and Kim Morgan from the novel by William Lindsay Gresham, the story tracks the rise of Stanton as he inveigles his way into the lives of very powerful people who know when they’re being conned. Previously adapted into a laudable Tyrone Power-fronted film from 1947, this new take on Nightmare Alley is inevitably darker, more morally complex and offers less redemption than its predecessor.

That’s not to say that del Toro lacks sympathy for his characters and their desperate plight for fortune and glory. Much like his cinematic hero, the late special effects wizard Ray Harryhausen, del Toro has always maintained a grounded level of sympathy for his monsters whether they’re human or not. This one is more of an ambitious opportunist, with Stanton exploiting the human need for answers and closure from the beyond. He rises to the challenge of becoming a popular clairvoyant, stepping out of the dirt track that he’s been living on and gradually moving up in the world with his charisma and dashing looks to seal the deal for his audience. But when he meets doubting Thomas psychologist Lilith at a show, it turns out that she’s just like him and they form a deadly partnership. With Lilith coming across as a very sharp knife to wield, has he bitten off more than he can chew though?

It’s an intriguing premise which del Toro teases out over the more revealing second and third acts of the film. The first act takes a good hour to set up Stanton and the supporting characters, but del Toro uses the time wisely to build up character moments which become important later in the narrative. He vividly recreates American carnival life for customers looking for escapism while the world teeters on the edge of impending darkness with WWII. It’s undoubtedly a handsome-looking production, with the period detail capturing the lives of the haves and have-nots in a subtle manner. It’s a film about belief and the limits of what can be achieved by those who dare to push harder. Bradley Cooper does an admirable job here of keeping Stanton somewhat ambiguous in both his backstory and his forward ambitions. Stanton is reaching for the American Dream, but it might be just beyond his reach. Even with Stanton’s murky moral compass, Cooper keeps him on the audience’s side though. It’s a tricky balancing act which he confidently pulls off with movie star charisma.

The second and third acts delve deeper into these mind games, stepping them up with the addition of Cate Blanchett as Lilith. She’s a femme fatale with the indomitable confidence of Katharine Hepburn by way of the slinky huskiness of Barbara Stanwyck. Watching her play off Cooper is a highlight, the two of them like prowling (nightmare) alley cats sizing each other up at every moment. The supporting cast is strong too. Del Toro even pushes some of his gothic tendencies (e.g. Crimson Peak) into the finale, upping the heightened drama of it all. It’s a lurid story, but told with flair and a cinematic eye for style and substance – they don’t always work together but they do here. It does go on a good bit though, drawing out that third act like one of its characters when confronted with a clairvoyant glitch. Some tighter editing and snappier pacing might have moved the plot along more smoothly. Del Toro is luxuriating in this carny world of shady opportunism and that’s not too much of a complaint when it’s so engaging and gorgeous to look at. Take a trip down this vividly cinematic, thrilling Nightmare Alley and come out the other side. Are you not entertained?