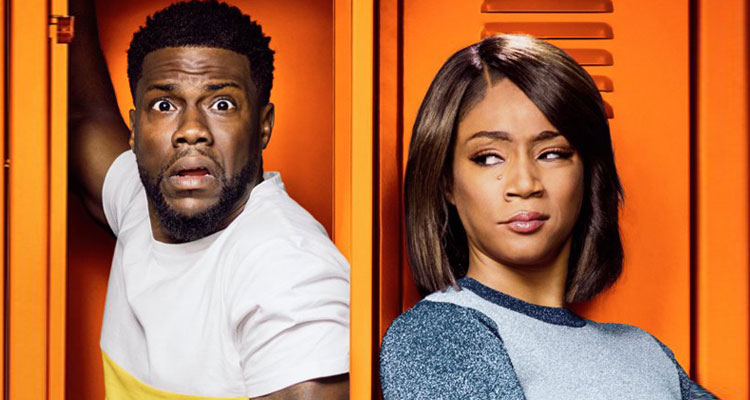 In short: B for effort

The Plot: Teddy (Kevin Hart) was never much good at school, flunking out without taking his GED (the US equivalent of the Leaving Cert). He is, however, the regular employee of the month at his job in a BBQ shop. He has a gorgeous girlfriend in Lisa (Megalyn Echikunwoke), but real career success eludes him due to him not finishing school. Without telling Lisa, he goes back to his old school as a very mature student to finish his education – at night. This is where he bands together with a similar bunch of misfits and collides regularly with his no-nonsense teacher Carrie (Tiffany Haddish). She’s going to have to slap some intelligence into him, as he may just be clinically dumb…

The Verdict: The trailer for Night School didn’t promise much. Just another raucous American comedy fronted by pint-sized funnyman Kevin Hart and motormouth Tiffany Haddish, fresh off her star-making turn in Girls Trip. It plays predictable and safe in terms of its laughs, based mostly on Hart’s no-hoper trying to catch up with everyone else in his class – 15 years too late of course. Dig a little deeper though and Night School is mildly surprising in how sweet, likeable and entertaining it is. There’s more to this diverting comedy than initially meets the eye.

With six (!) credited writers, including Hart himself, logic would dictate that the script should be an almighty mess of conflicted and conflicting characters. Teddy’s class is a motley bunch of rejects – soccer mom, wannabe singer, class philosopher and prisoner to name a few. However, director Malcolm D. Lee (who also directed Girls Trip) manages to keep the script under control and tighten the focus so that it becomes less about classroom-based conflict and more about moving towards a common goal. In true school movie style, it’s also inspirational. It’s like The Breakfast Club for rather mature students. Maybe.

Not content with starring and co-writing, the hard-working Hart is also the producer and he knows a winning formula when he sees one. Part of the charm of the film comes from his pratfalling and idiot savant behaviour, whether it’s him hawking holy chicken at a fast food joint or doing his Rain Man thing with calculus. The other part of the charm comes from his crackling chemistry with Haddish. What initially looks like a battle royale between them settles early on into mutual respect. Haddish is more agreeable here than in Girls Trip, coming across as sharp and funny – the ideal foil to Hart.

It’s not a classic comedy by any means, leaning too much into occasional crude humour which slightly sours the otherwise sweet aftertaste. A little less of Taran Killam’s overbearing school principal would have been welcome too. However, Night School gets a B for effort thanks to its amiable characters and the easy charms of its leads.