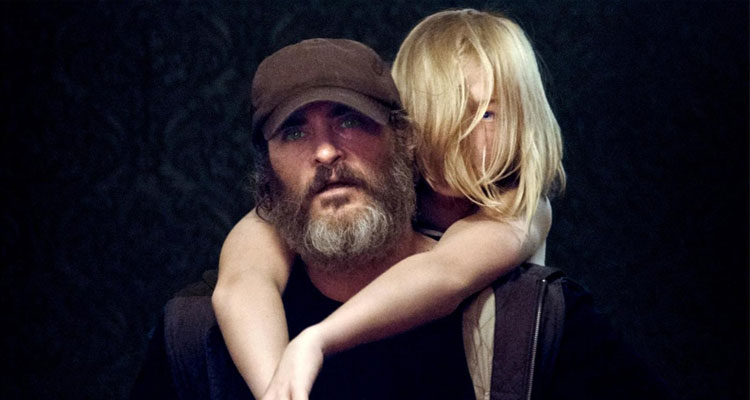 You Were Never Really Here – Interview with Lynne Ramsey

The latest film in Lynne Ramsay’s already stellar filmmaking career is getting her some of her best reviews yet. The lean, intense and truly surprising You Were Never Really Here stars Cannes best actor winner Joaquin Phoenix as a traumatised war veteran, unburdened and unthreatened by acts of violence, who tracks down missing girls for a living. When he takes on a job that spirals out of control in a story involving power and corruption, the choices he takes may be his making, or his downfall. Ramsay’s screenplay, adapted from Jonathan Ames’ novella, also took best screenplay at Cannes. Movies+ spoke with Ramsay about casting Phoenix in the lead role and violence on screen.

Q: How did the novella come your way and what was it about the story that prompted you to develop it as your next project?

A: There’s a great French company called Why Not? and they work with people like Jacques Audiard (A Prophet, Rust and Bone). Through the years I’d met a woman called Rosa Attab, who has good taste, and said: ‘I’ve read this novella, do you want to read it?’

They didn’t have the rights or anything but I read it in probably the life of this film, about 85 minutes, and it was a real page-turner. I always loved those economical, short movies like The Postman Always Rings Twice, and I love that writing as well. I started writing it on spec, really, I thought I’d see what I can do with it.

Q: You’re not known for straight adaptations. What appealed to you about the story and what did you feel you could bring to it?

A: Often these films are full of cliche, there are a lot of movies like that. I think it was partly the character, and the way Jonathan Ames wrote, he’s suffering from trauma, he loves his mum. There were all these aspects to him that were much more human than your normal guy, cutting a few heads and saving the girl.

I started talking to Jonathan, who’s a super smart guy, and said: ‘I’m going to take it in my direction, I don’t know where that’s going to go’. And he was like: ‘Cool, as long as you make it compelling’. He’s a very nice person, he’s away writing the next book. He said: ‘You took my book and you made it operatic’. That was a really nice thing to say. Lionel Shriver (We Need to Talk About Kevin) was great in that way as well. I’ve never done an adaptation that’s kind of like a straight literary adaptation.

Q: Is it true you wrote the screenplay with Phoenix in mind, and how did you connect during filming?

A: One of the producers worked with Joaquin on Buffalo Soldiers. Right away I thought, it’s got to be Joaquin Phoenix. And I’d never done that before, it was even before I wrote, and I’ve never done that. I’ve worked with Samantha Morton, who’s amazing, Tilda Swinton.

I’m thinking of the character in the script, then I’m finding the actor a bit later. Sometimes people go they know who the actor is right away, but that’s never happened to me.

But we never met each other until we got to the set.

He turned up really early, which was great, and we were talking about the character, and trying to get rid of all the cliches. He doesn’t analyse everything, it’s more if something felt wrong, or cheesy, or inauthentic, or how could we push it in a way that would be really interesting? And that’s just an exciting person to be around.

Q: The story is a violent one but many of the actual acts of violence are left to the viewer’s imagination. How did you approach this?

A: Having been so stripped back and have so many limitations (the film went into production earlier than envisaged for scheduling purposes) I was starting to think of almost a second script, of how does the violence operate in this? And what is it about? And I started to think that it’s an everyday thing for him so it should be really mechanical. I was also watching a lot of stuff on youtube, where you hardly saw anything but it was so affecting. Like, how does violence work? What is violence? I’d never done action sequences, I’d never done anything with guns. I think the approach to violence in it isn’t quite as explicit as you normally see.