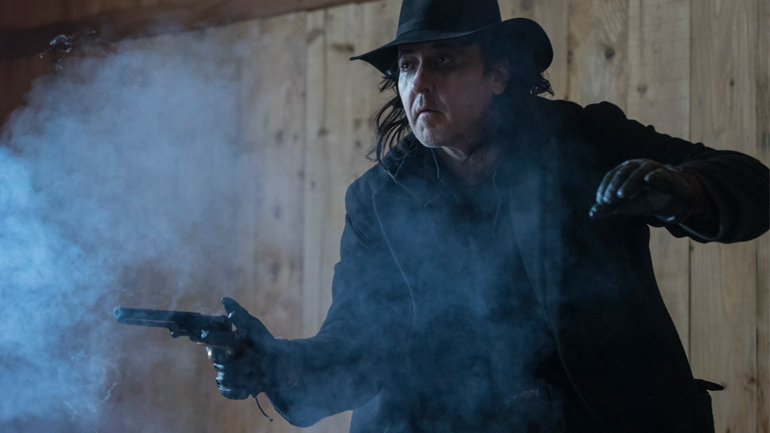 The Plot: Irish undertaker and carpenter Patrick (Emile Hirsch) and his wife Audrey (Deborah Francois) are hoping to start a new life in California with their young children. For now though, they are stuck on the California Trail in a muddy, god-fearing western town ruled over by Preacher Pike (Danny Webb). He’s outlawed gambling, drinking and whoring and business is down in corpses. Soft-spoken but dangerous outlaw Dutch (John Cusack) rides into town looking for trouble. He forms an uneasy alliance with Patrick and re-opens the saloon. Soon enough, corpses are landing on Patrick’s doorstep along with silver pieces. The sheriff is ineffective against Dutch and his men. Patrick must decide if he’ll remain a peaceful bystander or start dealing the death that has made him profitable…

The Verdict: That most American of contributions to world cinema, the western, has had international interpretations over the years. There were spaghetti westerns in the 1960s under the two Sergios (Leone and Corbucci). In more recent times, there was a French take in Blueberry and even a wacky Korean one in The Good, The Bad, The Weird. To that list we can add an Irish one – Never Grow Old. Despite outside appearances, this elegant and well-made classical western was shot in a wet, muddy mining area in Oughterard, County Galway in the depths of midwinter. That makes for an intriguing prospect alone, but it’s the story and the way it is executed that makes this such compelling viewing.

Writer/director Ivan Kavanagh had been planning his film for a decade before finally getting it off the ground and onscreen. It’s a labour of love and it shows. Kavanagh’s script takes an archetypal western set-up, a god-fearing and nearly lawless backwater, and then introduces the potential for conflict. A malevolent presence in Dutch squared off against a force for good and the moral conscience of the town. Then he plays around with preconceptions about this. Patrick is a man of peace, but he needs money to support his family and their dreams of a better life. When bullet-ridden corpses come his way, he pockets the money and prepares them for burial. Death is always a good business, but even better when there’s an amoral outlaw in town to encourage it.

It’s that contrast and eventual conflict between Patrick and Dutch that is at the core of the film. They become uneasy buddies at first, but when a line is crossed Patrick has to take a stand. Dutch is a gentleman gunslinger, the kind that will politely thank Audrey for a late-night dinner… but will just as likely put a bullet in your head if crossed. Cusack gives one of his best performances in years here, his soft-spoken drawl dripping with menace and the potential for sudden violence. He clearly relishes the part (what actor doesn’t want to be a cowboy?) and is equally matched by Hirsch’s intensity. His Oirish accent is a bit wobbly, but he does a decent job at selling Patrick’s motivations and eventual turn to taking a stand. Kavanagh also drops in an immigrant angle, which is equally relevant to today’s America.

The look of Kavanagh’s film is quite striking. Actors wade through mud and stark, confined but beautifully-lit landscapes that suggest an open-air prison that nobody can quite get out of. Everyone is not only caught in a loop in this ramshackle town but also a cycle of violence. The only way out appears to be death. It may be a grim prospect, but Kavanagh also shows glimmers of hope too. Never Grow Old is a worthy addition to the international western and shows a respectful consideration towards the time-honoured traditions of the genre. Saddle up for an atmospheric and powerful western with an Irish flavour that itself never grows old.