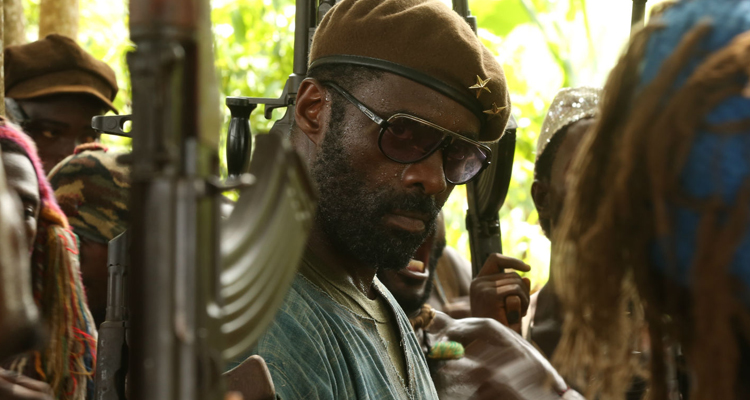 Produced by Red Crown Productions, and co-financed with Participant Media, Beasts of No Nation is based on the highly acclaimed novel by Nigerian author Uzodinma Iweala, bringing to life the gripping tale of Agu, a child soldier torn from his family to fight in the civil war of an African country. Newcomer Abraham Attah gives a stunning portrayal of Agu, while Elba dominates the screen in the role of Commandant, a warlord who takes in Agu and instructs him in the ways of war.

The film will debut on the same day in select theatres in the U.S. and worldwide on Netflix in all territories where the world’s leading Internet TV network is available.

“Beasts of No Nation is a powerful film that unfolds beautifully in the hands of director Cary Fukunaga with Idris Elba delivering a career-defining performance,” said Ted Sarandos, Netflix Chief Content Officer, “We are so proud to bring a film of this caliber exclusively to Netflix members around the world at the same time as it appears in select theatres.”

“Making this film has been one of the most profound professional experiences of our careers. Everyone, from Cary to our production assistants, sacrificed so much to make this film authentically in West Africa, where Uzo’s story was set,” said Daniela Taplin Lundberg, co-founder, Red Crown Productions. “To know that this harrowing and beautiful movie is going to reach the more than 50 million people within Netflix’s reach is beyond our wildest dreams. The Netflix team is bold and has the same pioneering spirit about distribution that I like to think we had about making the film in the jungles of Ghana. We could not be happier about this partnership.”

“There are hundreds of thousands of children fighting as soldiers in conflicts around the world and with Beasts of No Nation, Cary has succeeded in humanizing their terrible struggle with an incredibly emotional story and brilliant filmmaking built around Idris Elba and Abraham Attah’s performances,” said Jonathan King, EVP, Narrative Film at Participant Media.

‘Beasts of No Nation’ is produced by Amy Kaufman and Cary Fukunaga (who previously worked together on ‘Sin Nombre’), Daniela Taplin Lundberg, Riva Marker and Dan Crown for Red Crown Productions, along with Elba. Jeff Skoll and Jonathan King are executive producers for Participant Media and Donna Gigliotti is executive producer for Levantine Films.