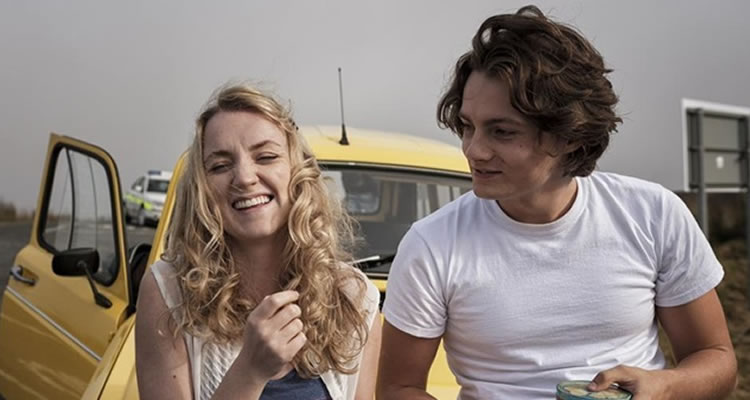 My Name Is Emily – Interview with Evanna Lynch

Directed by Simon Fitzmaurice – who is surviving with Motor Neuron Disease, which means he is wheelchair bound, and communicates via a computer – ‘My Name is Emily’ is an Irish road movie in which Emily (Lynch) runs away from her foster home, enlists the help of her new friend Arden (George Webster) and sets out to rescue her father (Michael Smiley) from a psychiatric hospital which, she believes, is holding him unnecessarily.

Movies.ie caught up with Evanna to find out more about this new project, her first leading role and just how she feels now that the ‘Harry Potter’ franchise is carrying on without her.

WATCH THE TRAILER FOR ‘MY NAME IS EMILY’

‘My Name is Emily’ was part funded though Indie Gogo and was fairly well publicised in Ireland. Were you aware of this before you became involved with the film?
I wasn’t when I got the script. I was so in love with it and I didn’t get it the conventional way; I didn’t get it through my agent, I got it through one of my best friends who is an actress, and she was like “You are going to love this”, and she was right. I actually couldn’t get an audition at first! I asked my agents to get me an audition and I just didn’t hear anything back and I was getting anxious, so then I started looking up and I found their page and the fact that they were funding it. I love that about the film, I think it adds another human, loving element. It’s like a triumph of our community; of the whole film industry and the public, the film lovers, because everyone gave their help.

After your friend sent you the script then, how did you finally get that audition?
I forced my way in! [laughs] I read the script, absolutely loved it, couldn’t get any response from the casting so that’s when I found the website and I found the producers emails. I took some scenes from the script and I just self taped them and sent them to the producer. I love it when that happens; then things just come into place. In retrospect, it actually really worked out. I think if I had been in the room with him I would have been more nervous because he’s an imposing presence, because he has that enormous chair, and he has all those sounds that are helping him breathe and things like that. It’s intimidating, and you’re nervous enough already going into any audition. I am glad it worked that way, because we got to know each other by email; long long emails, and we wouldn’t have had that luxury in person.

The film is one of fathers and daughters, as well as a coming of age, romantic road movie. Was it all of this that drew you to it?
Yeah! [laughs] I loved Emily, I thought she was so funny. Some of the things she says are hilarious. Truthful, hilarious and weird. On the one hand, I thought she was very brave about how she felt, she really believed in what she said. Also, I loved how she knows everything, but it doesn’t help her. I come from a family of teachers and intellectuals, and there is a safety in knowing everything. I think Emily feels that; she always wants to be the brightest, she sees through people’s bullshit, and yet there’s something holding her back and that’s what Arden teaches her; it’s not about knowing, its about loving and being vulnerable sometimes.

On a lighter note, the film is a road movie and there is such a long tradition of road movies – such as ‘Easy Rider’ and ‘Midnight Run’ – did you watch any to prepare for the role?
George [Webster] made me watch one… ‘Into the Wild’ with Emile Hirsch. I didn’t like that film at all! [laughs] The movie I was thinking about most when we made this was ‘Submarine’. I really like the girl in that; she’s such an amazing character. Obviously she’s a lot more confident than Emily, and she’s meaner [laughs] but I thought of her, and how she was weird and manipulative, but still broken. I was certainly awkward around boys and mean to them. Any boy I liked I just was mean to him. I thought I needed to win him over by being clever and being funny, and that didn’t work at all! That just makes people feel bad about themselves if you’re always smarter than them!

You mentioned that director Simon Fitzmaurice is an imposing presence, what was it like to work with gim?
It was brilliant. He’s just so passionate, that was the thing that excited me about him. That’s why he’s alive, because he’s such a passionate person; he just loves people and he loves life. I think just being around that kind of person, and the script… So many directors you get on the project and they’re like “Right, here’s the character for you, do your own thing, I’ll tell you about it when you’re not doing it right”, but Simon was so focused on the character’s journey and development that every evening we’d email and there’d be something more we’d uncover. That’s so exciting for an actor; for it to be alive, they’re the best performances, when you’re making decisions in the moment, in the scene. Simon was very much part of that process, and made me feel like I could indulge that.

Working on this smaller film – after cutting your teeth on the ‘Harry Potter’ franchise – must have been very different for you.
For Luna… In one way it was great because the writing was so good. I am always very grateful for that, that that was my first foray into acting and the writing was so strong that I didn’t have to struggle, didn’t have to build so much of her world. Coming onto independent films, I do have an appreciation that there’s a risk, I have more work to do, and it’s almost more rewarding then when you see it after and you’re like “Oh I had a lot to do with that”, whereas on Potter there are so many hands involved, so many minds involved, so many creative minds and brilliant minds but it isn’t so pure. I feel more proud when I have risked something and the fact that with indies where aren’t a million people watching your every move. You feel more like an artist. You feel more like you’re creating something.

It took Simon five years to bring ‘My Name is Emily’ to the screen. Did you have a sense of responsibility to get Emily right?
A hundred percent! I loved it so much, I knew how much it meant to me, and I could see how much it meant to everyone else. It wasn’t a role you could hide in, it was the frickin’ title character! [laughs] That was hard and that got in the way sometimes, if I’m honest. That is what gets in the way of art; when you want to be good, because then you are not being pure, you are not just expressing what it is, you’re giving the power to other people. There were some scenes that I build up in my head and I felt I needed to hit a certain note and that’s so bad as an actor. There was one where I went home crying, I was like “I have ruined this, why did he cast me?” and then the next day, I went back to it and just surrendered, and then something happened. It was hard, and that’s something I need to learn. I had never played a lead role before and I had a lot of expectations going into this, and I just need to learn to not do that in future.

This is the first film you have made in Ireland. What was that like?
It was exciting to me. I had always thought the big things happen ‘over there’. They don’t happen in our place; it’s too small and really, I was so inspired by meeting filmmakers here and they’ve all done tons. You would think because it’s a small industry there’s not much here, but because it’s so small, it makes people more passionate about what they do, it makes them believe in their projects and their stories more, because they have to come through such adversity and such scepticism. That was really exciting for me, and I realised just how beautiful Ireland is. I had never really spent much time in Wicklow, and we filmed mostly there and it was like “This is just stunning”.

What do you hope audiences take from the film?
Simon said something that I thought was lovely, that there was not one message in it; just moments. I hope they get whatever they need from it, that everyone has something that touches them. For me, personally, it was that you can’t plan too much. You have to feel, and to let love in you really have to let go.

We have mentioned ‘Harry Potter’ a bit; with ‘The Cursed Child’ coming to the stage and ‘Fantastic Beasts and Where to Find Them’ coming up, you’re now on the outside again looking in. How does that feel?
It’s so annoying! I am so glad you asked that ‘cos I am so angry! I want to be in there! The first few years, being a ‘Harry Potter’ fan and watching the films, and wanting to be in them, it was torture! I hated being on the outside! I was always so hungry for knowledge and I was always looking at the cast and thinking “I want to be your friend!” and I finally got there and I’m like “Yes, I’m in there, I’m the family now”, and now I’m knocked out again! I’m a Muggle now! It tortures me that they are probably filming it right now, there are people out there working on it right now. It just makes me angry!

With ‘My Name is Emily’, you are now part of a boom going on in Irish film, with projects like ‘Room’ and ‘Brooklyn’ being Oscar nominated, and upcoming films like ‘Viva’, ‘Mammal’ and ‘Traders’ all being praised. How does it feel to be part of this?
I love it! It makes me wish I’d stayed. I live in LA at the moment, and I feel like if ‘My Name is Emily’ had come along when I was 18 or 19, I don’t think I would have moved, because I don’t think I realised now vibrant our artistic community is. I thought you have to go somewhere else to make it. I think it’s great that we’re getting out there and people are appreciating us for more than the quirky leprechaun. It’s so important. I think we have a lot to share and I want to do more here. I hope I can.

What’s next for you… Other than moving back to Ireland to work in all Irish films?
At the moment I don’t know. I’m just waiting for another project to grab me. I kind of got a bit more picky after ‘My Name is Emily’, and I don’t know if I can afford to be, but I did because I realised that I really loved that and it changed me, and it took me a long time to get over it. I realised that I want every project to do that to me. I don’t want to do things just for the sake of working, I want something that I am willing to put my heart and soul into. I am just trying to find one that I love and that loves me back.