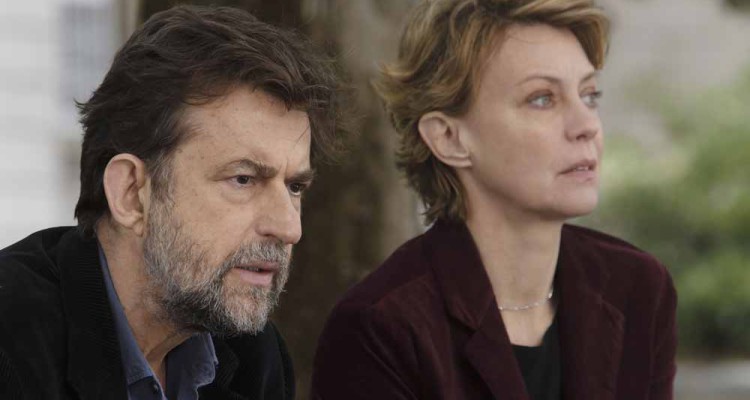 Interview for MY MOTHER – with director Nanni Moretti

This week, MY MOTHER/Mia Madre is released in Irish cinemas. Written and directed by Nanni Moretti, the film is the story of a film director played by Margherita Buy who is trying to juggle work and her personal life, as she realises her mother is slowly dying during a difficult movie shoot. The film also stars John Turturro as the actor causing much of Buy’s personal strife, and director Moretti also has a small role on screen. We caught up with Nanni Moretti on his seventh trip to the Cannes Film Festival earlier this year, to find out more about this deeply moving deeply personal film.

Did you decide from the beginning that this would be a film that would make people laugh and cry at the same time?
Nanni Moretti: My films have always contained these two aspects. Both my early films and my later films, there are always times that are painful in my films, and times that are full of joy. This isn’t a specific strategy that I have worked out, it’s just the way that I talk about people and life in general.

The end of the film refers to tomorrow; were you thinking of the future for the characters?
NM: When she is asked what she is thinking of, and the answer is ‘tomorrow’, I didn’t want to refer to the future of Europe! Of course, one can interpret this in many different ways! This is a film that talks about those who remain; those who are alive. It talks about people who die, who leave us. Memories remain, as the grandmother’s friends refer to and reminisce about. Margherita and Giovanni, through the stories told by the former students of their mother, discover something new about their mother. It’s as though these former students were able to inform them of something essential about their mother that neither of them, even if they were very close to their mother, had realised.

Is there much of you in the main character, a director trying to make a film during a difficult time in their personal life?
NM: We’re talking about the character of Margherita. I never really thought the protagonist in the film could be a man. From the outset I felt that the main character in the film should be a woman, and I immediately thought of Margherita [Buy]. Of course there is a lot of me in Margherita, whereas Giovanni is perhaps the person I would like to be, and maybe also the person that Margherita would like to be too.

Were you ever tempted to take the leading role yourself?
NM: As the director I never thought about myself in terms of this part in the film. As soon as I thought about the topic, I immediately thought of Margherita Buy. I wanted her to appear like that; anxious, irritable, always fraught with the feeling that she wasn’t up to it. I thought it would be very interesting this time around to entrust these characteristics to a woman, as opposed to a man. The character is very different from other women characters, who take care of other people, who are very enveloping. On the contrary, she is always somewhere else, compared with where she actually is at that moment in time. She finds it very difficult to keep control of her life.

It seems you have managed to blur fantasy and reality in the film, was this your intention from the start?
NM: Well no. The idea was not really to blur things. During the writing and the shooting of the film, we worked a lot to try and intermingle several levels of reality. You have dreams, you have memories, you have fantasies… The times in the film match the times in the mind of Margherita, where everything coexists. Everything is equally urgent, be it concerns for the mother, problems with the daughter, problems about work… All of this is mixed together with souvenirs, memories, dreams… Sometimes the spectator, when viewing a scene, may not immediately understand whether he is seeing a dream or reality or fantasy. I like that. Indeed, the film is built up on these various levels.

You use music in a very impactful way in the film, what was your idea for the music?
NM: Sometimes during the editing, I make certain choices, and I decide to use music that has already been recorded. I can’t explain why I make these choices; it’s hard for me to elaborate a theory to explain my choices. I didn’t want to have original music for this film, that’s why I chose existing music, music by various musicians. I don’t have a theory to explain the choices I made.

Watch The Trailer for MY MOTHER Below

There is a lot of love for Kubrick in the film, does this stem from your own love of the director?
NM: It’s the love that any spectator may have for Kubrick. I would like to say that sometimes John Turturro added personal things to his character. He read the script and fully understood his character in a very logical way. In terms of this character he occasionally added some personal things, and some of the things he added remained in the film. I wanted John Turturro to refer to one of the most famous people in cinema. It was quite impressive, the way he acted that scene.

What was it like for you to work with John Turturro, whose native language is not Italian?
NM: I like the fact that John Turturro is a director; that stimulates me, it reassures me. John also has a link with Italy; he works with Italian directors, he made a wonderful documentary himself. He has a close link with my country, and the culture of my country. That’s one of the many reasons I chose him. Of course, I hold him in great esteem as an actor, but there were all these other facts that entered into account as well.

How do you view the future of Italian cinema?
NM: I don’t know what to say. I am very pleased to see that there are three Italian films In Competition this year, and there are Italian films in the other sections too. I think that they are the fruit of individual initiatives though, of directors and producers working independently. The presence of Italian cinema in Cannes is not so much the fruit of a given environment or atmosphere, this atmosphere is always very discreet in Italy. Cinema is very important as an artistic phenomenon, and even as an industry.

People talk about the cinema in your films. What do you think is the part that cinema plays in society today?
NM: As Margherita [Buy] says in the film, ‘I am going to say certain things and think of other things, so don’t take account of what I am going to say to you now’. I’ll tell you what I really think in the bar in a few minutes time! First of all, I think it’s up to cinema to make good films. If possible, new kinds of films, and if possible, films that don’t give you the impressions when you’re watching them, that you have already seen them time and again. To make a good film, I don’t think there are any privileged topics to address. I don’t think that one can talk about first league and second league film. Any topic, any subject can be the stuff of a good film, or a bad film for that matter.

MY MOTHER is released in Irish cinemas on September 25th 2015