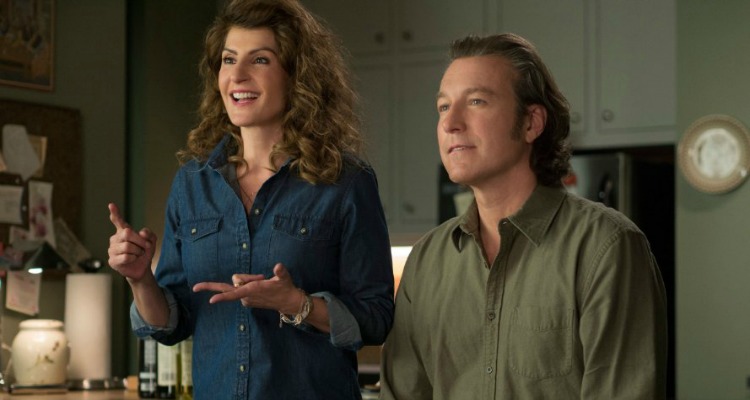 MY BIG FAT GREEK WEDDING 2 (USA/12A/94mins)
Directed by Kirk Jones. Starring Nia Vardalos, John Corbett, Rita Wilson, John Stamos, Michael Constantine.
THE PLOT: With her daughter Paris (Elena Kampouris) off to college, Toula (Nia Vardalos) finds her parents more demanding than ever. When it is discovered, through her father’s desire to prove himself a descendant of Alexander the Great, that her parents were never legally married, it is up to Toula and the family to find a way to make a new Greek wedding happen.
THE VERDICT: ‘My Big Fat Greek Wedding’ was a sleeper hit when it was released 14 years ago, and this new film in the series – which also includes an unsuccessful TV show, ‘My Big Fat Greek’ Life – tries its best to be charming and sweet, but ends up relying heavily on clichés and jokes that don’t work.
The cast of the first film have all returned for this new sequel, including Nia Vardalos, John Corbett, Ian Gomez, Joey Fatone, Michael Constantine, Lainie Kazan and Andrea Martin. New cast members include Elena Kampouris, John Stamos, Rob Riggle and Rita Wilson, who also produced the film. Some cast members do better than others, but on the whole the performances are wooden, highly staged and self conscious.
Screenwriter Nia Vardalos has tried to make lightning strike twice with this sequel to her Oscar nominated film, but this film feels much more cynical than the one that went before it. The jokes are filled with clichés, and there is only so much bickering between the family that the audience can take before it begins to grate. As well as this, the story doesn’t feel all that fresh – especially considering the first film – and the idea that those that move to America become more attached to their culture than the ones that stay home has been covered before, and much more subtly – stand up, ‘Brooklyn’! As well as this, the film feels like a series of jokes strung together, with ideas brought in and quickly dropped once the laugh has been squeezed from it.
As director, Kirk Jones – whose last film was ‘What to Expect When You’re Expecting’ in 2012 – keeps the film rattling at a decent pace, but ups the ante for the family scenes, making the film feel like a caricature of a Greek family, rather than the true observation of one. The jokes don’t land, characters are belittled and the warmth and charm of the first film simply is not there.
In all, ‘My Big Fat Greek Wedding 2’ is a film made for an incredibly specific audience, and one that does not work. Storylines are shoehorned in for the sake of drama, most of the performances are wooden and overdone, and the jokes simply do not work.
RATING: 1/5
Review by Brogen Hayes