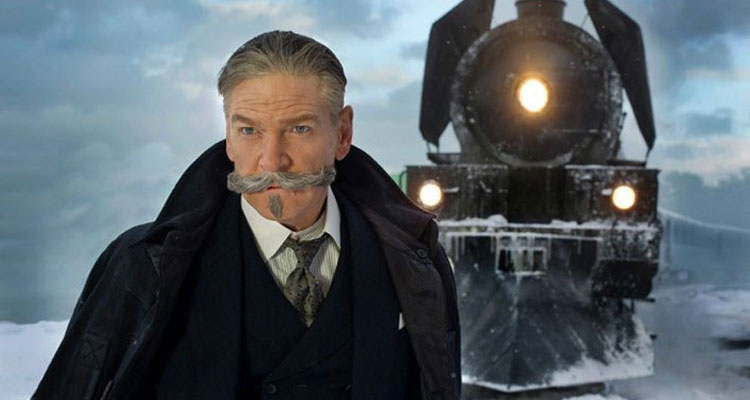 Murder On The Orient Express

The Plot: The great Belgian detective Hercule Poirot (Kenneth Branagh) is on his way back to London via the Orient Express from Istanbul. Having just solved a case, he’s in need of a holiday. He’s not going to get one though. While onboard, he’s approached by businessman Ratchett (Johnny Depp) to protect him, but Poirot refuses. He doesn’t like Ratchett’s face – and with good reason. The next morning Ratchett is found dead, having been stabbed multiple times. Suspicion is immediately cast on the immediate passengers – among whom include Ratchett’s secretary MacQueen (Josh Gad), governess Mary (Daisy Ridley), glamourous Mrs Hubbard (Michelle Pfeiffer), German professor Hardmann (Willem Dafoe) and the dour Princess Dragomiroff (Judi Dench). With the train caught in a snowdrift, time is running out for Poirot to solve the crime. That is, if he can…

The Verdict: There have been several film and TV versions of Agatha Christie’s 1934 Poirot book Murder On The Orient Express, most notably Sidney Lumet’s star-studded 1974 film. Kenneth Branagh is the latest to add his voice and considerable talent to the list, taking on both directorial duties and the role of the Poirot himself. Good stories are worth re-telling and this particular one is one of Christie’s best. It’s a complex story with a moral quandary at its heart. Even if you already know the outcome, it’s still thrilling to watch it play out again with a new cast and a different interpretation.

Screenwriter Michael Green takes his time to introduce this version of Poirot in the opening scene in Jersualem. From his fussiness and extreme attention to detail, to his love of pastries and that enormous, decadent moustache – true to Christie’s own description of her most beloved character. He also adds some brief action elements, to spice up the plot a bit and ensure that it’s not too stagebound / snowbound. With a more modern, ethnically diverse cast, he also injects an undercurrent of racism into the story too.

Branagh responds likewise here, using his 65mm camera to move the story outdoors at times and create a more confined but still threatening environment. This is particularly evident in Poirot’s summation, which takes place in a cave and with the suspects sitting at one long table. The parallels with The Last Supper are all too evident, for this is a key moment for Poirot to decide the potential fate of these suspects. Although he doesn’t physically resemble prior screen versions of Poirot, Branagh does an excellent job of portraying him. Less fussy and more perceptive than Albert Finney’s performance, this is a Poirot who isn’t all-knowing. He exudes confidence, yet even this case confounds him – kudos to Branagh for showing Poirot in a rare moment of private weakness, along with the weight of his final solution.

Some elements don’t work though. Despite having his own all-star cast, Branagh struggles slightly to keep all his characters / suspects in check. Some get more screentime than others, while those others are so thinly sketched as to barely be there (the Count and Countess Andrenyi). With his scars and armoured demeanour, Depp’s Ratchett is too obviously a villain as well. However, there’s a lot to admire in this new production of Murder On The Orient Express. Branagh certainly captures the opulence of the time period and the cinematography is striking (one can only imagine it looking amazing on a 70mm print). Branagh keeps it firmly on track and delivers an entertaining, occasionally thought-provoking journey into darkness and back into the light.