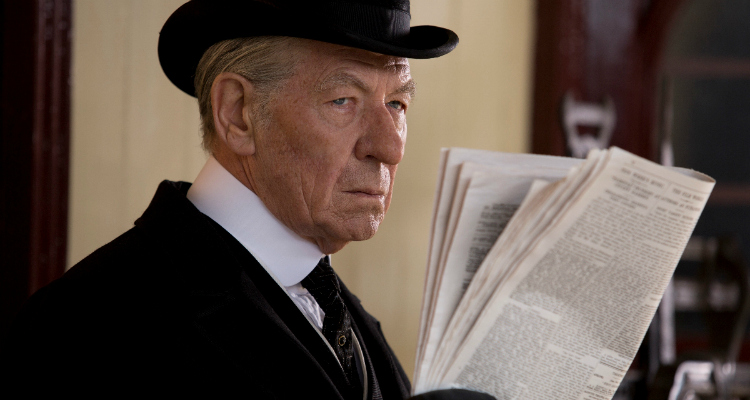 MR. HOLMES (UK|USA/PG/104mins)
Directed by Bill Condron. Starring Ian McKellen, Laura Linney, Milo Parker, Hiroyuki Sanada, Hattie Morahan, Patrick Kennedy, Roger Allam.
THE PLOT: It’s 1947, and we join the 93-year-old tired and retired Sherlock Holmes (McKellen) in his Sussex home, living the Beatrix Potter life deep in the country, with a scowling housekeeper (Linney) and her wide-eyed young son (Parker) keeping him company. And from dying alone at the end of the stairs.
Happiest when he’s attending to his beehives, Holmes is troubled by his recent visit to Japan, where his host, Umezaki Tamiki (Sanada), sprung the surprise claim that the great Baker Street detective was somehow responsible for his estranged father abandoning his young family to stay in England. Holmes cannot remember the details though, of this, or the failed case that sparked his retirement. Both cases begin to haunt him. Add to that the crushing weight of having to live up to the hero portrayed by his assistant Dr. Watson, and Holmes is a very troubled old man indeed…
THE VERDICT: With two Holmes currently on screen duties – Benedict Cumberbatch’s TV portrayal edging it over Robert Downey Jr.’s sardonic big-screen cartoon – it’s somewhat surprising and a little daring to see a much-loved English old dear taking on one of England’s most dearest literary loves.
Pretty much from the start though, the elderly Holmes feels like a good fit for McKellen, Conan Doyle’s grand old English detective being one third Gandalf, one third Ghandi and one third Gittes. Based on Mitch Cullin’s novel ‘A Slight Trick Of The Mind’, director Bill Condron (who enjoyed some major awards heat with McKellen with the 1988 biopic GODS AND MONSTERS) once again plays with the notion and nature of faded genius, fame and the need for solutions, true or otherwise. It makes for a beguiling, slow afternoon of a movie, free from exclamation marks and car chases. Which is a recommendation, by the way.
RATING: 4/5
Review by Paul Byrne