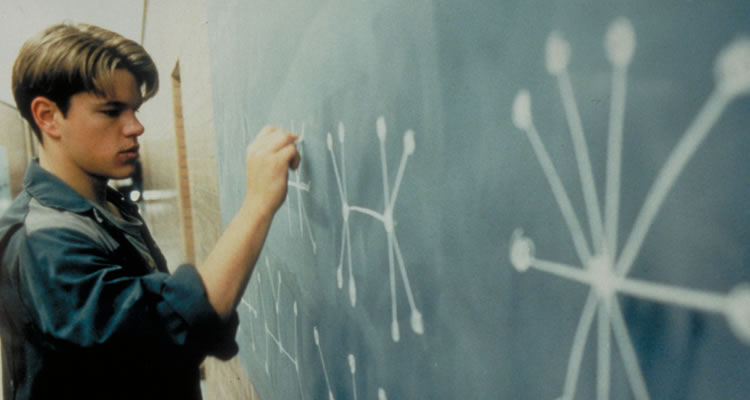 ‘The Man Who Knew Infinity’ is released in Irish cinemas this week, and stars Dev Patel as Srinivasa Ramanujan, a young man who had a poor childhood in Madras, India but gained entrance to Cambridge University during World War I. While there, and under the careful guidance of G.H. Hardy (Jeremy Irons), Ramanujan became a pioneer in mathematical theories.

To celebrate the release of ‘The Man Who Knew Infinity’, Movies.ie has taken a look back at some great movie geniuses, and the films that brought them into our lives. Keep reading to find out more.

Will Hunting – ‘Good Will Hunting’
Played by Matt Damon, Will Hunting is has genius level intellect, and most of his knowledge is self-taught. Hunting also has an Eidetic memory but works as a janitor at Massachusetts Institute of Technology, and seems to have no interest in making use of his intellect. When Hunting solves an algebraic graph problem posted by grad student teacher Professor Gerald Lambeau, it seems his life is about to change, but it is only when he is caught committing a crime and forced to study algebra and undergo psychotherapy that the truth about Hunting’s early life and dreams for the future come to light.

John Nash – ‘A Beautiful Mind’
Inspired by Sylvia Nasar’s book of the same name, ‘A Beautiful Mind’ is the story of John Nash (Russell Crowe), a Nobel Laureate in Economics and his struggles with mental illness. While at college, Nash begins to develop paranoid schizophrenia and endures delusional episodes, that culminate in Nash believing himself to be a codebreaker for the US government, trying to uncover Soviet plots against his home country. It is not until things take a turn for the dangerous that Nash is properly diagnosed, and over time, learns to ignore his hallucinations.

‘A Beautiful Mind’ was directed by Ron Howard and, as well as Crowe, starred Jennifer Connelly, Ed Harris and Paul Bettany. Although the film has been criticised for taking dramatic licence with true events, it went on two won four Oscars, for Adapted Screenplay, Best Picture, Best Director and Best Supporting Actress for Jennifer Connelly.

The Tenenbaum kids – ‘The Royal Tenenbaums’
‘The Royal Tenenbaums’ is directed by Wes Anderson, and tells the story of the Tenenbaum family and how they respond when their father, Royal (Gene Hackman), announces that he has a terminal disease. Of course, Royal is faking his illness in order to get closer to his estranged family, and his presence sends the family into chaos. The children of the family, Chas (Ben Stiller), Margot (Gwyneth Paltrow) and Ritchie (Luke Wilson) achieved great success at a young age – as a math genius, a playwright and a tennis player, respectively – but have struggled through their adult lives. It is only when their father shatters their carefully ordered but creatively unfulfilling lives that the Tenenbaum kids begin to realise their potential as adults.

‘The Royal Tenenbaums’ was well received as a quirky, dry and depressive comedy, and the style of narration in the film went on to inspire the great TV comedy ‘Arrested Development’.

‘Rain Man’
When Charlie Babbit’s (Tom Cruise) father dies, he leaves his multi-million dollar estate to Charlie’s brother Raymond (Dustin Hoffman), a sibling that Charlie was not aware of. When Charlie meets Raymond and realises that he is autistic but something of a savant when it comes to patterns and recall so, in order to try and get hold of his father’s money, Charlie spirits his brother out of the home where he lives, and takes him on the road. ‘Rain Man’ is the story of a selfish man trying to use his brother’s genius to make some quick money, but ultimately becomes a tale of two people getting to know, and respect one another.

‘Rain Man’ won Academy Awards for Best Picture; Best Actor in a Leading Role (Dustin Hoffman); Best Director; and Best Writing, Original Screenplay, and has gone on to be both lampooned and loved in popular culture.

‘Back to the Future’
Marty McFly (Michael J. Fox) is an aspiring musician who has an unusual friendship with the eccentric and often socially awkward genius Dr Emmett “Doc” Brown (Christopher Lloyd). When Doc shows off the fact that he has built a time travel machine into a DeLorean car, terrorists from whom he stole the plutonium to make the device work, then target him. To save his friend – and himself – Marty jumps into the car and finds himself travelling back in time to 1955; the years his parents met. Doc Brown is eccentric, absent-minded and, as he says himself “A student of all sciences”. Brown is also a great friend to Marty, often risking his life to save his friend.

‘Back to the Future’ spent 11 weeks at the top of the box office in the US, won an Academy Award for Best Sound Editing and went on to be beloved by kids and adults all around the world.

Honourable mentions to… ‘The Imitation Game’, ‘The Theory of Everything’, ‘Amadeus’, ‘Shine’ and ‘Searching for Bobby Fischer’.

Do you have a favourite movie genius? Let us know in the comments below.

‘The Man Who Knew Infinity’ is released in Irish cinemas on April 8th 2016. Watch the trailer below…