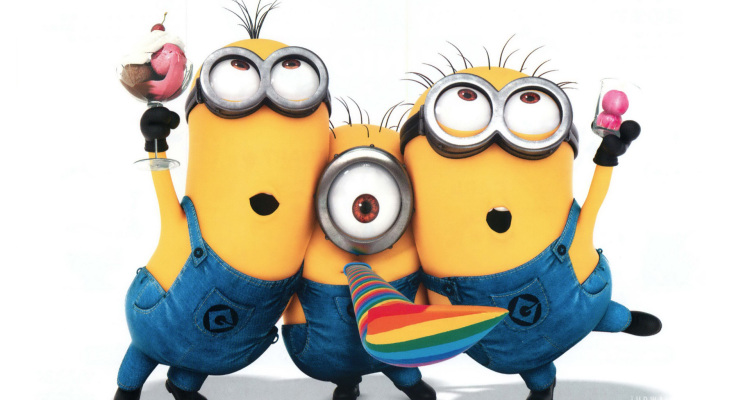 Movie villains who needed help from the MINIONS

MINIONS is released in Irish cinemas this week. This spin off from the DESPICABLE ME films focuses on the little yellow Minions, who so delight in helping the biggest villain they can find, long before they ever met the Despicable Gru.
After they accidentally destroy all their masters, the Minions isolate themselves in Antarctica, but three of their number – Bob, Kevin and Stuart – set out to find a villain they can serve, and thus fulfil their life’s purpose.
Since the Minions’ only want in life is to serve the truly despicable, Movies.ie gathered together some of the most bungling villains in the movies; ones who could have definitely benefitted from some Minions in their lives…

Denis Nedry – JURASSIC PARK
Computer Programmer at Jurassic Park, Denis Nedry (Wayne Knight), was bribed to steal dinosaur embryos from the Park. In order to do so; Nedry disables the Park’s security system, leaving the fences de-electrified, and dinosaurs on the loose.
Of course, Nedry meets his end at the claws (and teeth) of a Dilophosaurus, but all of this could have been avoided if Nedry’d had some Minion help. Not only would this have meant Nedry staying in the control room and sending the Minions out to steal the embryos, but the security system would have only needed to be offline for seconds, meaning the dino-based carnage of JURASSIC PARK may not ever have happened. Of course, this would have been a much less interesting movie, but a much more lucrative venture for Nedry.

Harry and Marv – HOME ALONE
Harry (Joe Pesci) and Marv (Daniel Stern) are two of the most bungling criminals in movie history. The pair are burgling vacant houses in Kevin McCallister’s (Macaulay Culkin) neighbourhood where Kevin has been accidentally left home alone by his parents. Kevin soon realises he must defend his home, and himself, from the so-called ‘Wet Bandits’, and booby-traps the house to tackle the burglars when they break in.
This leads to the ‘Wet Bandits’ getting hurt, and eventually caught, but all of this could have been avoided if Harry and Marv’d had some Minions on their side; the Minions could have charmed Kevin and distracted him while the bandits raided his home, and no-one would have been physically hurt.

Jerry Lundegaard – FARGO
Minneapolis car salesman Jerry Lundegaard (William H. Macy) is desperate for money, and enlists the help of two criminals to kidnap his wife and hold her to ransom for $80,000. Of course, this is a Coen Brothers movie, so the path to riches doesn’t run smoothly; Jerry soon finds himself being investigated by an enterprising local cop, and bodies turning up left, right and centre.
If there had been Minions on hand in Fargo, North Dakota, it’s pretty clear that things would have gone a lot better for poor old Jerry. Instead of enlisting two ruthless criminals, the Minions could have been dispatched to kidnap Jerry’s wife, and surely the ransom would have been paid quickly and quietly. Poor Jerry…

Ken Pile – A FISH CALLED WANDA
Directed by Charles Crichton, A FISH CALLED WANDA is an 80s heist movie starring John Cleese, Jamie Lee Curtis, Michael Palin and Kevin Kline. After a successful diamond heist, criminals Wanda (Jamie Lee Curtis), Otto (Kevin Kline), Georges (Tom Georgeson) and Ken (Michael Palin) are spotted by an elderly lady walking her three dogs. Ken is given the task of taking out the eyewitness but manages to kill her dogs before he gets to her, causing himself a lot of grief and bodily harm.
Ken’s troubles would have been made considerably easier by the presence of Minions, who would surely have been able to take on an elderly lady and her dogs, and completed the mission to silence an eyewitness without getting injured themselves…

Nick Hendricks, Dale Arbus and Kurt Buckman – HORRIBLE BOSSES
Nick’s (Jason Bateman) boss David Harken (Kevin Spacey), is sadistic and cruel, Dale’s (Charlie Day) boss Julia Harris (Jennifer Aniston) is sexually harassing him and Kurt’s (Jason Sudeikis) boss Bobby Pellitt (colin Farrell) is addicted to cocaine and ruining the company. No wonder these guys hate their bosses.
he three hatch a plan to kill their terrible employers, but manage to mess it up at every turn. Imagine they’d had Minions on their side!? Each boss would have been taken down with ease and grace, and the heartache and confusion of bringing in Motherf****r Jones (Jamie Foxx) would never have happened.

MINIONS is released in Irish cinemas on June 26th 2015.

Watch the trailer below…