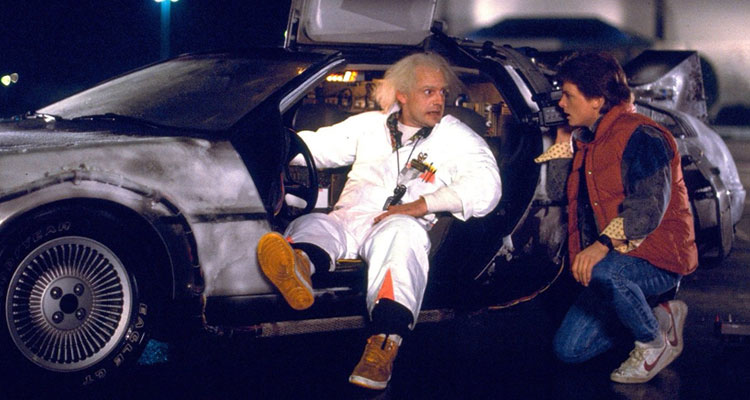 Movie characters who came back from the dead

PAPER SOULS is released in Irish cinemas this week, and tells the story of a burgeoning romance between writer Paul (Stephane Guillon) and Emma (Julie Gayet), a widow, which is thrown into chaos when Emma’s husband returns from the dead. Paul and the newly resurrected Nathan (Jonathan Zaccai) must find out why he has returned, and Emma and Paul must find a way to remain in one another’s lives.
PAPER SOULS is a surprisingly sweet comedy about life after death, and in the spirit of characters being too good to stay gone, we have gathered together a list of the best characters that even death couldn’t stop.

Gandalf – THE LORD OF THE RINGS Trilogy

Father figure and leader of the quest to Mordor to destroy the One True Ring, Gandalf sacrifices himself for the sake of the Fellowship when a Balrog corners them in the Mines of Moria. Those who had devoured the books knew that this was not the end of Gandalf, but the battle between the wizard and the beast is still impressive with this knowledge in mind. Gandalf’s last line before he falls to his death – ‘Fly, you fools!’ – is typical Gandalf, and typically moving.
All is not lost, however, as Gandalf is sent back from his fiery death, carried to Lórien by Gwaihir, Lord of the Eagles, is reclothed by Galadriel and lives to fight another day. Hurrah!
THE LORD OF THE RINGS would be a sad story indeed without the musings of Gandalf, and Ian McKellen’s superb performance, so bringing him back more powerful than before is one of the great things about Tolkien’s books, and Jackson’s films.

Aslan – THE CHRONICLES OF NARNIA: THE LION, THE WITCH AND THE WARDROBE

Aslan (voiced by Liam Neeson) is the King of the Beasts, Lord of Narnia, and spiritual guide to the Pevensie children who find a magical realm at the back of a wardrobe. Aslan sacrifices himself for the sake of Edmund – who had been bewitched but is to be executed for betrayal – Aslan allows the White Witch (Tilda Swinton) to kill him, and claim dominion over Narnia.
Of course, someone as good and kind as Aslan could not stay dead for long, and the lion is revived by ancient magic, which was invoked when he willingly traded places with Edmund.
C.S. Lewis created Aslan as a metaphor for Jesus, and his rising from the dead is in keeping with this theme. In terms of the story, Aslan had to return; not only to defeat the evil Witch, but to protect the Pevensie children as they journey through the unfamiliar world of Narnia. Aslan is the heart and soul of Narnia – as well as the film – so THE LION, THE WITCH AND THE WARDROBE would have been a tragic place without the fierce and proud lion who has the power to revive those turned to stone, and crown the Pevensie kids as monarchs of Narnia.

In Speilberg’s film, a cute – but kind of weird looking – alien is accidentally left behind on Earth, and is befriended by Elliott (Henry Thomas) a lonely young boy. E.T. – as the alien names himself – eventually becomes ill and, due to a psychic connection between the two, Elliott also becomes unwell. After the government steps in and the link between E.T. and his friend is severed, the tiny alien dies while Elliott recovers. Of course, this being a kids’ film and the death of a tiny cute creature being almost too much to handle, E.T. quickly returns to life, and reveals that his people are coming back to Earth to get him.
In the end, Elliott and E.T. are finally separated when the alien returns to his home planet, but this is a much happier ending than death, since the possibility of E.T. stopping by Earth to visit Elliott is not ruled out.
Although E.T. is resurrected in the film, Spielberg was quick to state that he did not intend the film to be a religious parable, saying “If I ever went to my mother and said, ‘Mom, I’ve made this movie that’s a Christian parable,’ what do you think she’d say? She has a Kosher restaurant on Pico and Doheny in Los Angeles.”

Jean Grey (Famke Janssen) is a level five mutant with the dual powers of telekinesis and telepathy. When we meet the character in X-MEN, she is a doctor and beloved teacher at Professor X’s academy for gifted children. Presented as a potential love interest for Wolverine (Hugh Jackman) it is not until X-MEN: THE LAST STAND that Jean’s true powers are revealed. At the end of X-MEN 2, Jean sacrifices herself so that the rest of the team may escape a wall of water descending on them, and in X-MEN: THE LAST STAND, Jean is returned as the Phoenix – literally rising from her watery grave unharmed – before struggling to control her new powers and find out which side of the coming battle she belongs on. All this, however, is negated in X-MEN: DAYS OF FUTURE PAST when Logan/Wolverine travels back in time and stops her from needing to die in the first place. Still, a neat trick.
Jean’s transformation into Phoenix underlines the thin line between good and evil in the X-MEN films and, even though she is not the only character to return from the dead in the X-MEN franchise, she is the only one who returns conflicted about the life she should lead.

Doc Brown – BACK TO THE FUTURE

Doc Brown’s death in BACK TO THE FUTURE is the catalyst that sends Marty back in time, but his resurrection is one that does not occur due to mystical forces. Libyan terrorists gun Doc Brown down in the parking lot of the Twin Pines Mall, seemingly in retaliation for stealing the plutonium to fuel his time machine. If time travel movies have taught us anything though, it’s that events can be changed and, when Marty returns from 1955 – crashing into the now renamed Lone Pine Mall’s car park – he finds that even though Doc is gunned down precisely as he was before, Marty’s warning to him means that he was wearing a bullet proof vest, and survived.
Although audiences didn’t realise it at the time, the gunning down of Doc Brown at the start of BACK TO THE FUTURE would have been a huge loss for the franchise, since the white haired, manic and loveable character is not only a father figure and mentor to Marty, but a source of great comedy throughout the films. Thank DeLorean then, that Marty saw sense enough to warn Doc of the future, and Doc heeded enough to listen. Although the issue of whether Doc really died at all, since he was saved with time travel, is still one that’s up for debate.

Honourable Mentions to:
Lola – RUN LOLA RUN, Electra – DAREDEVIL/ELEKTRA, Letty – THE FAST & FURIOUS Franchise and Agent Coulson – AVENGERS ASSEMBLE/MARVEL’S AGENTS OF S.H.I.E.L.D (OK, we know that last one’s a TV show, but we have a lot of love for AC).

Do you have a favourite movie character who returned to life? Let us know in the comments below.