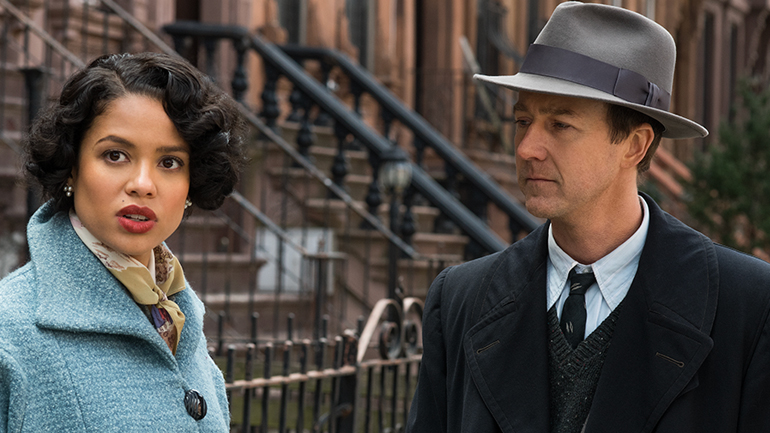 Motherless Brooklyn is a film noir set in 1950’s New York that tells the story of a private detective living with Tourette Syndrome. Edward Norton takes on both directing and acting duties in the epic film that has been 20 years in the making. We caught up with DOP, Dick Pope to talk about the film’s journey to the big screen.

How did you get involved with working alongside Edward Norton on the film?
In the early days, before the script, before the challenge of working on the film, I worked with Edward in 2006, he was the lead actor in a film I shot called ‘The Illusionist’. During the making of it we worked up a relationship that continued after the film. He was very supportive of my work… and that it had a dark and shadowy side to it. Our relationship grew from there, we kept in touch and he basically asked me, a few years ago to shoot this film. He sent me his script, which I absolutely loved & he also sent me a look-book. Over many years he had amassed a wonderful eventuation of the period and what he wanted to see visually within his film.

Ed Norton as well as directing also stars in the film, how was it balancing both roles with him?
He’s been discussing it with me for a few years, he had this film completely and utterly in his head. It was wonderful tapping into that, there was nothing made up as he went along. We had all the visual language down before we started, he was free to act in the film because I knew exactly what we were going to achieve. It’s a difficult thing, both directing and being an actor in the film. He has to have one hat on, take another hat off and step out there, so he relied on me a lot to guide him through the visual side of it.

Did you read the original novel from Jonathan Lethem to get a feel for the world & the characters or did you get everything you needed from Ed and the script?
I don’t tend to do that, if I’m asked to do a project and it’s based on a book I almost always don’t read the book. A lot of people talk about the differences between the book set in the 90s and the film set in the 50s but I didn’t even know that because I never read it. The only thing that is important to me is the script, I only deal with what I’m being asked to photograph, otherwise it would be a confusion for me.

Recreating 1950’s New York can’t be easy, or cheap, what type of challenges did you have with the sets and locations?
It was so complicated & such a challenge; it was not easy. You can imagine trying to find old New York in modern New York. It’s one of the big triumphs of the film for me. A lot of the challenges initially were finding that old New York, and where we couldn’t, we used CG elements, 100’s of CG shots. A lot of them were cleaning up streets, removing modern cars & paraphernalia, there are literally hundreds. Of course Penn Station, they ripped it down, partly what the film is about. Ed wanted to show this magnificent railway station as it was, I think it’s a triumph.

Do you feel a bigger responsibility for accuracy when recreating actual streets and famous New York landmarks like the Brooklyn bridge or Penn Station?
Yes, for instance for Penn Station, they had all the original plans for it, as well as the photography. We looked at lots of photos, one in particular that we all thought was the best, was a still of sunlight coming through these high glass windows of the station. So that’s what I did, I put very large lamps, like spotlights, as if coming through the glass windows, and they built a CGI set around this light coming in and how it hit the floor.

What a shame that such a beautiful station was knocked down…
That’s what this film is about for Ed in many ways, it’s a love letter to New York and certainly a love letter to New York how it used to be. He’s from that city and lives there, everything in the film is very carefully chosen. It’s a poem to New York by him really. It’s not only a labour of love but it gave him a fantastic opportunity to evoke that era. There’s so many secret New York locations still preserved that he knew about.

Ed has said that he wanted the film to have a look of old cinema without it looking like it had been treated, how difficult is that to achieve working with digital cameras?

That’s a tough assignment, it’s not easy. I shot ‘Mr Turner’ in the digital world and he knew from that film that I could evoke it digitally without it looking digital, that’s what I strive for really. I hate the clean cut digital sharp world that I see over and over in cinema. I wouldn’t say I hark back with huge nostalgia to the film past but I certainly try evoke a cinematic look that’s got texture, that’s got grain, that doesn’t feel digital. I used old lenses on Edward’s film, old ‘Cooke Speed Panchro’ lenses that were used extensively in the 50s. So I used old fashioned lenses on the front of this new technology, and with the smoke and atmosphere that I put in, I always tried to give it a smoky haze to take away the digital curse.

Do you miss working with film?
I do miss it, I miss the magic of it in a way, the mystery of it but you’ve got to move forward and that’s the world we live in. You can go back and shoot film but it’s very expensive and doesn’t give you the range. I’d have been very hard pressed on ‘Motherless Brooklyn’ to shoot on film, that would not have been a good idea.

What advice would you give to someone starting out as a film maker wanting to get into cinematography?
I would advise them to experiment with old film, it’s a fantastic learning ground. It’s got more discipline. That film running through the camera is very expensive so it disciplines you. Don’t shoot until you have everything really right and ready because the film stock itself is really expensive. The problem with digital, when young cinematographers & directors hit it is they tend to churn the camera on and off, not cutting, no discipline, it becomes woolly. It’s not specific because its cheap to run through the camera but it needs to be more thought about beforehand before you press the trigger on the camera.

MOTHERLESS BROOKLYN is at Irish cinemas from Dec 6th