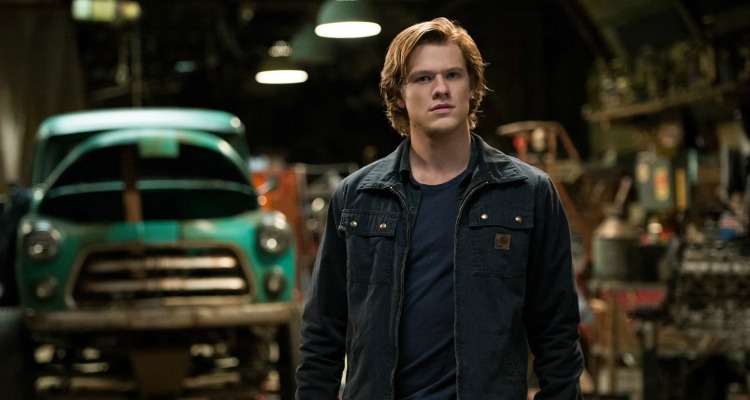 MONSTER TRUCKS (USA/PG/104mins)
Directed by Chris Wedge. Starring Rob Lowe, Lucas Till, Jane Levy, Amy Ryan, Thomas Lennon
THE PLOT: After an explosion at an oil drilling site, teenager Tripp (Lucas Till) finds a strange creature hiding in the car repair yard where he works. On discovering the creature – nicknamed Creech – is friendly, and has a talent for making cars go faster than he ever thought possible, Tripp realises he has something special on his hands. The trouble is that Terravex – the oil company drilling the site – are on the hunt for Creech, and it is up to Tripp, and his friend Meredith (Jane Levy) to get him back home.
THE VERDICT: ‘Monster Trucks’ is a strange sort of film. Although it is a strictly by the numbers creature adventure movie, aimed at 8-10 year olds, it boasts an impressive cast, including Jane Levy, Danny Glover, Rob Lowe and Thomas Lennon. The creature is cute and the car chases fun, but the literal title and lack of faith from Nickelodeon Movies suggests that ‘Monster Trucks’ is not going to be the box office smash and Christmas classic that it was potentially hoped to be.
The cast of the film do fine in their roles. Rob Lowe works fine as the villain of the piece, with Thomas Lennon being the voice of reason to his oily – sorry! – evil. Lucas Till makes Tripp a likeable enough teen, but the true confusion arises with Jane Levy – who was fantastic in Don’t Breathe earlier this year – Amy Ryan, and Danny Glover signing on to play underdeveloped and clichéd roles.
Derek Connolly’s screenplay feels as though it has taken its inspiration from any 80s adventure movie you care to name – ‘Flight of the Navigator’, ‘ET’, ‘The Goonies’ – and added big cars for the sake of a little more vroom! There is nothing inherently wrong with the screenplay for ‘Monster Trucks’, it is just that it is familiar, has been done before, and thus feels rather cliché and familiar. Also, many of the characters are totally underwritten, and while it is nice to see that Jane Levy’s character is not just another version of the female eye candy in the Transformers franchise, making her a one-dimensional book worm is only marginally better.
‘Monster Trucks’ is director Chris Wedge’s first live action film – he previously brought us the animated films ‘Robots’, ‘Epic’ and the first ‘Ice Age’ film – and he does fine with the film. The action set pieces are where the fun of the film lies, and there are problems with some of the performances in the film, since they feel one-dimensional and rather overblown, but ‘Monster Trucks’ is a film aimed at 8-10 year olds who like monsters and cars, and the film ticks both of those boxes. As well as this, Creech is rather cute, and there is a nice relationship between this CGI character and the teenager who befriends him.
In all, ‘Monster Trucks’ is not necessarily disappointing, but it stumbles in standing out from any other monster adventure movie in recent years. There is a sweetness to the film, but the emotional heart is somehow lacking, and many of the cast seem to over do their roles, and the ones that don’t are wasted in the film. Still, those obsessed with cars and monsters are sure to have fun with ‘Monster Trucks’, and for the adults accompanying them to the cinema; hey, at least some of the chases are fun.
RATING: 2/5
Review by Brogen Hayes