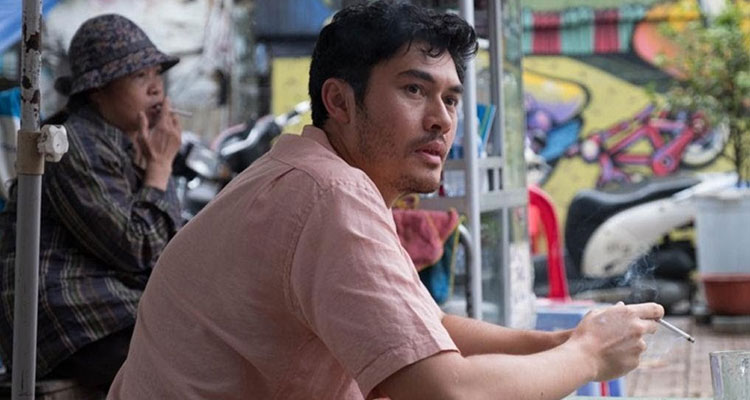 Kit (Henry Golding) finds himself a virtual stranger in his old home. Having lived in England for nearly 30 years, he’s arrived back in Vietnam. When he was younger, his family fled persecution in the wake of The Vietnam War or, as the locals call it, The American War. The wounds are still felt in the Vietnamese people including family friend Lee (David Tran), haunting them as much as the American soldiers who fought in this Lost War. Kit is home to bury his late parents along with his brother, who arrives the following week. During this time, he struggles with his cultural dislocation and seeks out solace in the arms of American businessman Lewis (Parker Sawyers). Somewhere between the past and the present, there is a healing point which he needs to reach if he is to move forward…

The Verdict: Cambodian-born but UK-based writer/director Hong Khaou’s second feature film Monsoon follows in a similar style to his notable 2014 debut Lilting. It also explores themes of cultural identity, communication between different cultures and the need for human connection in a seemingly indifferent world. It’s also a slight and modestly-made film, but there’s enough dramatic energy behind the performances and direction to power it to a resonant conclusion. Filmmaking can often be a personal journey for a director and Khaou has drawn from his own family experiences. With a dedication in the end credits – ‘for my courageous parents’, Khaou taps into his family’s flight from Cambodia but then distances the story slightly by changing the location and some details to Vietnam.

The result is a film that has a distinct and measured approach towards its character development and how to play that out against the vivid, teeming street life of modern-day Vietnam. The film begins with a visually arresting overhead shot of cars and motorbikes zipping around each other in some sort of order like insects. In among all this we find Kit, out of place in a country he barely remembers and feeling strange in his former home. As memories of the past, both good and bad, come to the surface, he connects with an American. Lewis feels his own guilt about what his soldier father did there decades earlier and was then returned to society a damaged man. With relatively minimal dialogue and lingering glances, Khaou draws these two characters together through their cultural dislocation.

Running throughout this thoughtful film is the suggestion that there’s a lot more bubbling away underneath the surface of our main characters Kit, Lewis and Lee. They hint at deep family traumas with each other but don’t elaborate much further. Not that much elaboration is needed. A viewer doesn’t need to know much about Vietnamese post-war history to understand what Kit is going through as he reconciles the past with the present, his cultural identity of belonging to both England with Vietnam, his late parents with his newly altered view of the world and his place in it. In the hands of another director, this story might not have sufficient dramatic heft to keep it running to a satisfying conclusion. In Khaou’s safe hands though, he smoothes over potential issues like the film’s delicate structure and reinforces the story’s impact.

It helps as well to have a leading man capable of carrying the film effortlessly. Having featured in a number of frothy Hollywood-backed films, Henry Golding shows the kind of dramatic rang  that he hasn’t been afforded before. It’s a mostly subdued performance in which Golding weighs up Kit’s backstory, but still has that engaging twinkle in his eye and sense of discovery about his new old home. Shot on location in Vietnam, Khaou’s roving camera captures the startling contrast of both city and rural life but also suggests that this society has moved on from its haunted past. Another commendable outing from a new director whose narrative voice grows stronger with each film.

Monsoon is released in cinemas and digital – 25th September.

In short: A stronger voice