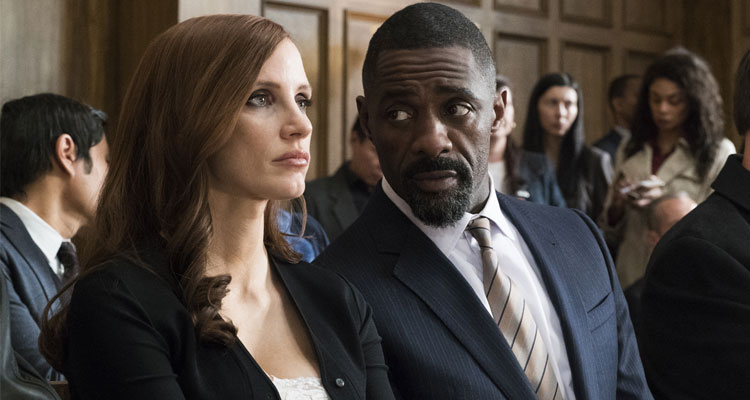 MOLLY’S GAME (USA / 15A / 140 mins)
Directed by Aaron Sorkin. Starring Jessica Chastain, Idris Elba, Michael Cera, Kevin Costner, Chris O’Dowd, Jeremy Strong.
THE PLOT: Molly Bloom (Jessica Chastain) was always an overachiever. Not the James Joyce character, but the Olympic skier who had to move on after an accident. She was always destined for greater things though, tutored by her psychologist father Larry (Kevin Costner). Law school beckoned for her. However, this ambitious young woman set her sights on a much bigger gamble – the world of high-stakes poker, where lives can be made or broken in a single, long night. She initially works for a character she refers to as Dean (Jeremy Strong), running his office by day and his celebrity-attended poker games at night. Then she branches out to run her own business. But the Feds come sniffing when it appears that not everything is above board. Her attentive attorney Charlie (Idris Elba) listens to her self-narrated story…
THE VERDICT: Aaron Sorkin has developed a reputation in the entertainment industry as being one of the best living screenwriters around. With TV series like ‘The West Wing’ and films like ‘Moneyball’ and ‘The Social Network’ under his considerable belt, he has a natural ear for authentic, highly well-written dialogue that draws you deeper into the characters and their stories. It was only a matter of time then that he would turn to directing as well, hence the arrival of ‘Molly’s Game’.
Sorkin adapts the book by the real-life Molly Bloom, turning it into a typically talky but never less than absorbing drama. It’s a startlingly confident directorial debut, no doubt honed through years of watching other directors like David Fincher at work. There’s more to it than that though. He also knows how to hold and captivate an audience’s attention through a generous running time that feels like it’s not actually enough. You know you’re in for something unique with a Sorkin joint, the kind of mature, dialogue-driven film that we’re told Hollywood just doesn’t make anymore.
The film moves back and forth in time with ease, from Molly’s rebellious teenage years, to her illegal poker games to a possible jail sentence as the game catches up on her. It’s a singular portrait of a most fascinating character. She thinks, or perhaps overthinks, every detail right down to how to keep her clients coming back. She’s interested in having power over the powerful, while keeping a professional distance from them.
It’s a role that has Jessica Chastain written all over it and she delivers in straight flushes here, projecting Molly’s cool, supremely confident air. She’s always been a reliable screen presence, but this is undoubtedly a career best for her. After two Oscar nominations, she’s a strong contender for an Oscar win with this complex, multi-layered performance. She even manages to be sympathetic too. A solid supporting cast, including Elba atoning for the muddled ‘The Dark Tower’, rounds off a very satisfying film.
Maybe Sorkin should stick with directing his own screenplays. Not that there was anything wrong with ‘Moneyball’ or ‘The Social Network’. On the strength of ‘Molly’s Game’, it looks like he doesn’t need another director to implement his vision. Sorkin’s Game indeed. The first film of 2018 is one not to be missed.
RATING: 4 / 5
Review by Gareth O’Connor