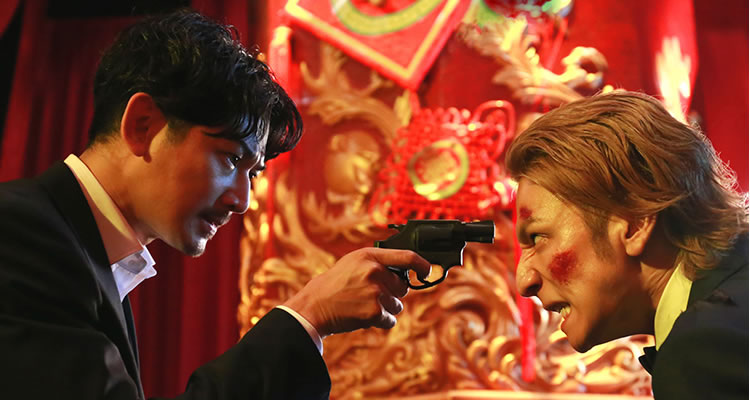 THE MOLE SONG: HONG KONG CAPRICCIO (Japan/TBC/128mins)
Directed by Takashi Miike. Starring Toma Ikuta, Shinichi Tsutsumi, Eita, Arata Furuta, Nanao
THE PLOT: Reiji Kikukawa (Toma Ikuta) returns in Takashi Miike’s sequel to ‘The Mole Song: Undercover Agent Reiji’. After being fired from the police force for his transgressions in the first film, Reiji is out to prove that he can bring down the bad guy – this time out it’s crime boss Todokori, who trades in MDMA – but when he is promoted to number 2 in the crime clan, becomes Todokori’s right hand man and becomes infatuated with his boss’s daughter Karen, things go wrong… As is their wont.
THE VERDICT: First things first, fans of ‘Ichi The Killer’ can take a seat; ‘The Mole Song: Hong Kong Capriccio’ does not follow the style of the ultra-violent crime film that Miike is known for. While ‘The Mole Song: Hong Kong Capriccio’ is a crime thriller, it is based on the Manga by Noboru Takahashi, and Miike has made the film very much in keeping with this over the top cartoonish style.
Toma Ikuta carries ‘The Mole Song: Hong Kong Capriccio’ very well as the slightly idiotic undercover cop whose loyalties are tested hen the Chinese mafia targets the Yakusa. Ikuta’s facial expressions and reaction bring much of the comedy to the film, as do his over the top sexual reactions to just about any scenario that he finds himself in. The rest of the cast features Riisa Naka, Eita, Tsubasa Honda, Nanao and Arata Furuta.
Kankurô Kudô’s screenplay, once again based on the Manga by Noboru Takahashi whips along at breakneck speed, and there are times when it is difficult to tell just who is turning on whom, but by the final act, this all gets straightened out… Just about. The final act is where this dramedy, which feels a lot like Infernal Affairs’ with a cast of buffoons, runs into trouble as the final set piece starts well, but soon feels drawn out and slow, and the addition of a tiger does little to relieve this. There are plenty of nods to the first film to keep fans happy, including Reiji starting his adventures wearing nothing but some well placed newspaper. The violence is restrained throughout, and for a film that talks a lot about nudity and genitalia, there are surprisingly none to be seen on screen.
As director, Takashi Miike keeps the film light and erring on the side of silly, but there is a message to be found amid the brightly coloured suits and buffoonery; one of the dangers of human trafficking, and the danger that outright hatred poses. Miike makes ‘The Mole Song: Hong Kong Capriccio’ funny and often ridiculous, but this is part of the over the top charm of the film.
In all, ‘The Mole Song: Hong Kong Capriccio’ is a worthy follow up to ‘The Mole Song: Undercover Agent Reiji’, and shows us that some characters learn little from their experiences, to great comedic effect. The cast are strong in their roles, although some simpler storylines and a tighter final set piece would have made ‘The Mole Song: Hong Kong Capriccio’ a stronger and more engaging film.
RATING: 3.5.5
Review by Brogen Hayes