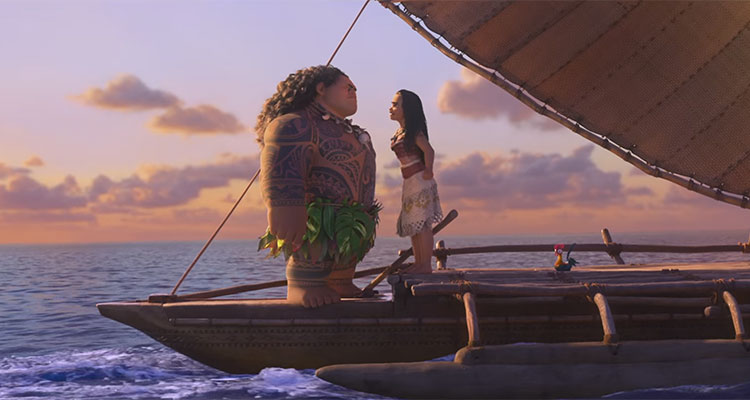 MOANA (USA/PG/103mins)
Directed by Ron Clements and John Musker. Starring Auli’i Cravalho, Dwayne Johnson, Rachel House, Jemaine Clement, Nicole Scherzinger
THE PLOT: Moana (Auli’i Cravalho) has always been drawn to the ocean, but has been discouraged from answering the call of the sea as her father Is trying to make her ready to take on the role of future leader of the small island tribe she is part of. When crops begin to fail and fish move away from the island, Moana’s grandmother (Rachel House) reminds her of an island myth; that demi-god Maui (Dwayne Johnson) stole the heart of a goddess, and until it is returned, the struggles facing the islanders will only get worse. Defying her father’s wishes, Moana takes a boat to sea in search of Maui, in the hopes of making him return the goddess’ heart.
THE VERDICT: ‘Moana’ is based on an original idea by Ron Clements and John Musker, and blends together myth and reality in an intriguing and magical manner, which is not unusual, since Clements and Musker are the directors who brought us ‘The Little Mermaid’ and ‘The Princess and the Frog’.
The voice cast of ‘Moan’a are strong, bringing their characters to life in a warm and relatable way. Auli’i Cravalho makes Moana a tenacious and charming character, and Dwayne Johnson bring humour and heart as the demi-god Maui. The rest of the cast features Jemaine Clement, Alan Tudyk, Nicole Scherzinger and Rachel House. All of the cast – Johnson included – sing with heart and passion, keeping the soaring feel of Disney films such as ‘Frozen’ and ‘Aladdin’ alive.
Ron Clements and John Musker’s story was developed into a screenplay by Jared Bush, who blends together myth, music, magic and the struggles of expectation to make a fun adventure on the high seas. Maui brings the humour to the screen, while Jemaine Clement makes a giant singing crab obsessed with treasure an entertaining menace. There are fantastical elements of the film that work incredibly well; making Moana aware that there is a lot more to the world than her island home, in realms of beasts, magical creatures and mythical islands. The dialogue works well, there is plenty of humour and the songs in the film are as soaring and singable as audiences could hope for.
As directors Ron Clements and John Musker keep the film well paced and fast moving, with enough time given to establish Moana’s home and the tribe’s beliefs before she heads out on her adventure across the seas. The animation for the film is beautiful, with the islands looking otherworldly and gorgeous, and the ocean becoming a character of its own as it aids Moana on her journey. There are segments animated to look like traditional drawing, and these fit the tone and look of the film well.
In all, ‘Moana’ is a beautiful film inspired by myth and legend. There are times when the film does not feel as magical as recent Disney offerings, but ‘Moana’ is funny, engaging and has wonderful songs. The animation is lovely and makes the film feel otherworldly and fully realised, and while this might not be this year’s ‘Frozen’, there is a lot to love in ‘Moana’.
RATING: 4/5
Review by Brogen Hayes